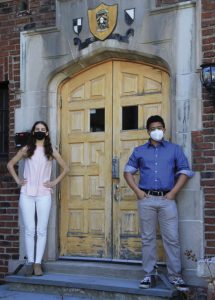 Seal and Serpent officers Andrea Scott (left) and Jordan Ferrell, both juniors, outside the chapter house on Thurston AvenueSara DeGraw

When Andrea Scott ’22 transferred to Cornell from Penn State as a sophomore, she didn’t relish another year of dormitory living. After weighing her options, she did something that would have been unthinkable in an earlier era: she moved into her older brother’s fraternity house.

But it wasn’t just any Greek house—it was the Seal and Serpent Society, which has been forging its own path since it was founded on the Hill in 1905 as a rare fraternity without an affiliation to a national organization. It remains independent more than a century later, having endured countless cultural shifts as well as world wars that disrupted collegiate life for two generations of young men. And last fall, Seal and Serpent embraced an existential change: its alumni and active brothers voted overwhelmingly to go gender neutral, allowing women to become full members for the first time. “I don’t see any downsides,” says Mat Tabacco ’09, MEng ’10, Seal and Serpent’s alumni president. “This will help us maintain our membership—and I feel like we’re on the right side of history.”

The group had been initiating women as “honorary sisters” for decades; it had also long allowed them to fill empty rooms in its chapter house as rent-paying boarders—as Scott did when she matriculated on the Hill in fall 2019. After the membership voted in favor of gender neutrality, she became one of the society’s first female pledges. And just weeks later, in January 2021, she followed in the footsteps of her brother (Michael Scott ’20) by becoming its president. “It really is a family,” says Andrea Scott. “No matter what kind of day you had, when you walk through the door someone is always going to be there to greet you and ask how you’re doing. It’s not about having a house where you just party; it’s about creating an environment where people feel like they’re wanted, they’re welcomed, and they matter. It’s a support system.”

Seal and Serpent traces its roots to two groups of friends, nicknamed the Crooks Club and the Senators, who met through drill practice in Army ROTC. They eventually formed a fraternal society, buying and renovating a home on West Avenue before deciding to build their own chapter house. They purchased land on Thurston Avenue in 1913, but—due in part to the outbreak of World War I, in which numerous brothers served and three perished—the group’s spacious, half-timbered lodge wasn’t completed until 1927. “It ties the alumni to Cornell,” Tabacco says of the twenty-three-bedroom, Tudor-style residence. “It makes coming back to campus feel more like you’re coming home.” 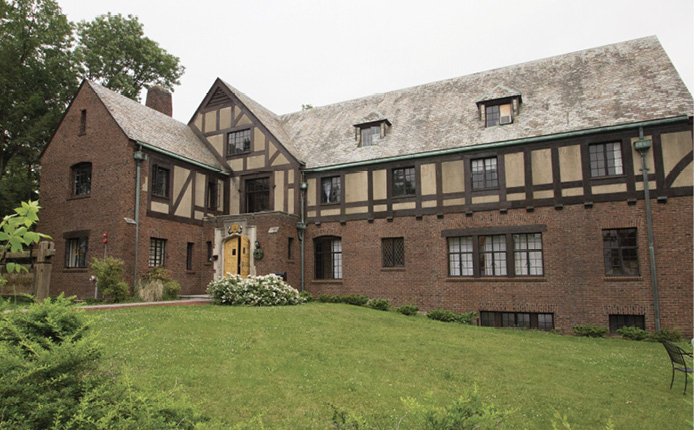 From the beginning, Seal and Serpent wasn’t a typical fraternity; for one thing, it eschewed Greek letters in favor of Sanskrit ones. But early on, members say, it prided itself on its diversity and independence. “We’ve always been a little more progressive,” observes communication director Jeff Jockisch ’86. “We focus on individuality instead of on cohesion and making people be part of some kind of groupthink.” While it was long common for fraternities to limit their membership—either explicitly or implicitly—by race or religion, says Robert Schwarting ’69, BS ’71, MEng ’76, “we had none of those problems; we were devoid of non-diversity language.”

Schwarting, who served in the Army after graduation and went on to a career in municipal planning and economic development, recalls having his perspective broadened by his fellow members—including one who was an out gay man at a time when that was uncommon, and another, an African American, who helped him understand the inequalities driving the era’s racial justice movement. Says Schwarting: “I credit my success in later life with being able to share a house and a living experience with people from various backgrounds.”

The society’s prominent alumni include Mark Kirk ’81, a former U.S. Senator from Illinois; Gligor Tashkovich ’87, MBA ’91, the Republic of Macedonia’s first-ever minister for foreign investment; and Martin Tang ’70, a University trustee emeritus and benefactor of the eponymous welcome center overlooking Beebe Lake. In 2010, TV viewers got a glimpse into Seal and Serpent when comedian Bob Saget “pledged” the frat—attending a toga party and a formal, among other rush festivities—for an episode of “Strange Days with Bob Saget,” an A&E reality show that delved into intriguing subcultures (which also included bikers, Bigfoot hunters, and pro wrestlers). “There’s no one defining characteristic of a Seal and Serpent man or woman, other than outstanding character,” says Tabacco. “The members have different backgrounds and majors; you’re surrounded by others who are unique.”

Female “friends of the house” were offered a form of auxiliary membership starting in the Eighties. Nancy Law ’84 was among the first “little sisters”—a term that was eventually seen as retrograde and changed to “honorary” sisters. “You could hang out and have really interesting conversations on so many different topics,” recalls Law, a longtime administrator in Alumni Affairs and other University offices who also belonged to a sorority as an undergrad. “It was an unusual, nontraditional type of place. I really liked that.”

In 2016, Seal and Serpent voted to leave Cornell’s Intrafraternity Council (IFC), due in part to changes in University regulations that limited rush to a week each spring—a constraint that, Jockisch says, didn’t allow enough time for potential pledges to get to know the unorthodox frat and vice versa. “When we decided to get out of the IFC and go our own way, we started talking about going gender neutral,” he explains. “Over a five-year period, people got more comfortable with it.” By the time it came to a vote during a virtual Homecoming event last November, he says, there were few dissenters among either the alumni or active membership. “Women were already part of our culture,” Jockisch says. “They were members without the membership badge.”

Among the current students who were strongly in favor of going gender neutral was Jordan Ferrell ’22. A performing and media arts major from Westchester County, Ferrell joined the fraternity the spring of his freshman year, seeking a social niche on the Hill; he’s now its vice president, the first African American to hold the post. “Our ‘label’ has always been in flux—at different times we’ve been the Glee Club house or the rowing house or the ROTC house—but we’re really just looking for whoever would be a good fit for our society,” Ferrell observes. “The atmosphere is very welcoming and accepting; we always say, ‘It’s not a fraternity house, it’s a fraternity home.’ We stay true to that.”

Since the vote, the former honorary sisters have been offered alumni membership, and Law has joined the board. Going into Seal and Serpent’s mid-semester rush this spring, five out of the twenty-three active members were female—and the eight-person pledge class was evenly split between men and women. Scott, a math major who’d previously taken on the role of house steward (facility manager), will serve as president through the end of 2021. “It’s cool to think that we’ve been around for over 100 years,” she says. “And we’re growing in size, which is really exciting. There have been times where the society has been small and we’ve worried about not surviving, but we’ve always pushed through.”

Ten of the original members in 1906Provided