For a brief spell on a luminous Sunday afternoon in July, a standing-room-only crowd in Goldwin Smith Hall followed a centenarian into the fourth dimension—of poetry, that is.

During a two-day celebration to mark his 100th birthday, English professor M. H. “Mike” Abrams led his audience in a communal recitation of the final stanza of W. H. Auden’s “On This Island.” The first three dimensions of a poem, Abrams explained, are the visible words, the sounds we hear in our heads when we read them, and the meaning of the words themselves. Then—with the request to “read with me, please”—Abrams demonstrated what he called its fourth dimension: “the act of utterance.” 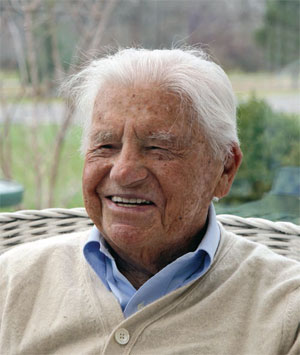 “These are sounds that begin near the heart and exit near the brain,” said Abrams. “That physical action breathes life into a poem. And it’s an almost totally neglected study.” By reading in unison, Abrams transformed his audience into a community of fellow travelers— a bit of wizardry he has performed routinely during his nearly seven decades as a Cornell professor.

To meet Abrams is to be in the presence of literary history. He recalls attending readings by such giants as T. S. Eliot, Ezra Pound, e.e. cummings, Dylan Thomas, and Robert Frost. Renowned as both a scholar and a teacher, Abrams made his mark in 1953 with The Mirror and the Lamp: Romantic Theory and the Critical Tradition, which the Modern Library ranks at number twenty-five on its list of the 100 best nonfiction books of the twentieth century. He also produced The Glossary of Literary Terms, which became a handbook for students and scholars of English. Abrams served as adviser to new editions, even adding his own comments on its definition of “rap.”

That would be enough to put him at the top of the scholarly charts, but Abrams also served as founding editor of the Norton Anthology of English Literature—for thirty-eight years. At his insistence, the anthology was “easy to hold in your hand and read under a tree.” It remains a staple of lit courses and a favorite among readers. 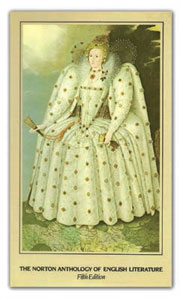 Genial, slow to anger, and nuanced in his scholarship and instruction, Abrams remains a beloved figure to generations of Cornellians. He believes “the best scholars make the best teachers” and sees no reason to divide the two. “All my work cameout of my teaching and returned to my teaching,” he says. “It’s a reciprocal process.”

Abrams was born in New Jersey on July 23, 1912; at Harvard during the Depression, he majored in English. “There weren’t jobs in any other profession,” he explains, “so I thought I might as well enjoy starving, instead of starving while doing something I didn’t enjoy.” He came to Cornell in 1945 and was granted emeritus status in 1983. He’s still working; in August, W. W. Norton published his latest book, The Fourth Dimension of a Poem and Other Essays.

The two-day birthday celebration included an “Open Mike for Mike,” in which Abrams was lauded by colleagues, friends, and former students. A commemorative website (http://as.cornell.edu/abrams) has drawn dozens of comments— such as one from Cindy Kane Trumbore ’78, who recalled the time she used The Mirror and the Lamp as source material in another professor’s class. “I happened to run into you coming across the Suspension Bridge after I delivered the paper, and I exclaimed, ‘I just quoted you in a paper!’ ” she recalls. “You took me by the sleeve, gently pulled me aside, and asked me to explain the premise of the paper to you. I did, you pronounced it sound, and you went on your way.”