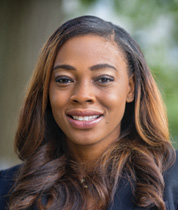 In addition to holding a PhD in nutrition from the University of Minnesota, Tashara Leak is a registered dietitian—so she’s well versed in both the theoretical and hands-on aspects of promoting healthier eating habits. An assistant professor of nutritional sciences in Human Ecology, Leak (right) has a secondary appointment at the Medical College in Manhattan. The city is the backdrop for her research, which is focused on developing ways to improve nutrition in adolescents from minority backgrounds who live in households with lower socioeconomic status (SES)—an effort that requires addressing a wide swath of inequities. “In my work in general, I am not blaming individuals; I am attacking systems,” Leak explains. “It’s not like these adolescents just happen to eat fewer carrots and apples—it’s because they experience structural racism and poverty. So they have less access to healthy foods, to transportation, to educational opportunities, to after-school programs, to places to be physically active.”

Why focus on adolescents? Is it partly because they’re starting to make their own food choices but their tastes might not be fully formed?

One hundred percent. There’s so much data about how adolescents have purchasing power, and in places like New York City they also have a lot of independence. They might live in Brooklyn and go to school in Harlem, so they’re on the train an hour each way; they go to bodegas before and after school. And also, adolescents from racial/ethnic minority backgrounds who are also from low SES backgrounds typically grow up fast; there’s this term “adultification.” They’re more likely to have adult-level responsibilities, which might include grocery shopping, caretaking for younger siblings, or having jobs to help financially support the household.

You mentioned bodegas. Why are they so important?

In New York and a lot of other cities, corner stores are life—you’re more likely to see a corner store than a grocery store. People don’t just go there for snacks; they go to buy lunch, breakfast, dinner, and household items. If we made healthier options available there, people could actually purchase them.

How do you make that happen?

I met with City Harvest, which has a program to help corner stores sell healthier products—specifically fruits and vegetables—using behavioral economics strategies like signage and price points. One thing they hadn’t been talking about was whole grains. I said, “What if we encouraged people to get popcorn or whole-grain pretzels instead of things like potato chips?” So we conceptualized a whole-grain snack pack. Starbucks has something similar; it might include hummus, carrots, and whole-grain crackers. I conducted a study where we asked bodega owners what they thought about the idea and surveyed adolescents going in and out of these stores. We got data on how much they spent in that store that day and how much they’d spend on the product. We published two papers, and City Harvest found a local grocer to make some of these grab-and-go packs. They’re now testing them out and making them available in corner stores in Harlem.

Since the food industry is so good at tapping into our evolutionary desire for fat, salt, and sugar, how do you convince a kid that “healthy” doesn’t mean tasteless?

It’s about coming at it from a food justice/social justice lens. When kids learn the history—how these products get developed, why there are more corner stores and bodegas in low-income communities of color, why their white peers get healthier options—that angers them. That’s where the individual change starts to come, when they realize that they are actually being targeted by industry. The social justice/food justice piece is ingrained in all my projects, and I think that drives behavior change more than me saying, “Carrots and popcorn are healthy.” And it’s also about overall wellness. You should be entitled to a safe place to play basketball, to dance, to buy food.

An often-discussed challenge is access to fresh ingredients. How do you see that issue?

I live in a Caribbean neighborhood in Flatbush, Brooklyn, and at the grocery store near my house, the produce is not amazing and costs twice as much as in a Trader Joe’s or larger grocery store—but those are in wealthier, predominately white neighborhoods. Part of the issue is distribution: the more stores buy, the less they have to charge. Can you get smaller grocery stores to form a system where they can split those costs? Policymakers can also do things in public housing, like put in gardens, have after-school programs, and have CSAs drop off there.

What motivated you to go into this field?

As a Black woman growing up in the South, I personally saw these disparities. I grew up in Durham, North Carolina, and you could see it in one particular street. On one side it was folks who worked at Duke, and on the other it was people who lived in Section 8 [subsidized] housing; even the grocery stores were different. I also come from a family of healthcare providers—most of my family are nurses—so I always knew I wanted to be involved in health and to address equity.

How has the pandemic affected your work?

The feasibility study for our Advanced Cooking Education (ACE) program—a 4-H after-school club that aims to improve diet quality, nutrition knowledge, and cooking skills—was supposed to happen last spring, but with schools closed we were delayed. We have five to six years of USDA funding to do both that and a larger-scale study that will impact about 9,000 eighth graders. The plan is to do the feasibility study this fall and start the larger study in January 2022, but we lost a whole year. We’re going to adapt—like, the after-school program might be partially virtual and they’ll do the cooking lab at home with their family. Originally, they were supposed to prepare an ethnic meal together and then talk about that dish, how they liked it, how they might amend it. But instead we’re going to give them the groceries to take home to make the dish, and this semester we’re recording some engaging and fast-paced videos on how to prepare the meal.

You mentioned that the students would be making ethnic meals. Why is that important?

Historically, there’s a narrative that you have to abandon your cultural foods in order to eat healthy. When you see images of “healthy” people it’s often skinny white women or white men running in a park. A lot of Black people and other people of color don’t see themselves when it comes to health and wellness—so I knew I was not going to talk about kale salad. I want the dishes we prepare to reflect the diverse cultural makeup of New York City and for the kids to see foods they recognize.

How do you go about that?

We surveyed about 140 eighth graders to ask them about their cultural backgrounds and what cuisines they’d want to make; for example, even though the South Bronx is very Puerto Rican and Dominican, that doesn’t mean that someone from Jamaican heritage doesn’t live there. Every week we’re focusing on a different ethnic cuisine; we chose plant-based recipes that already exist, like arroz con gandules, rice and peas. So many people who immigrate to this country feel like they have to assimilate to American food culture and abandon their norms for survival’s sake. We’re trying to dispel that and empower youth to reconnect with their cultural heritage and identity.

Do you think these inequities are getting more attention due to the reckoning over structural racism?

Right now there’s a lot of talking, but people like myself who do this kind of work have been a little frustrated. It’s great that there’s this light being shined on an issue that many of us have known about for 400 years, since Black people were kidnapped and brought to this country. But we’re like, “Now what? What are the action plans? What are the steps?” I think one of the biggest messages is that none of these things are in isolation. You can’t just talk about healthcare; you also have to talk about housing in-security, employment insecurity, inequities in education. It’s all interconnected.

One thought on “Equal Portions”