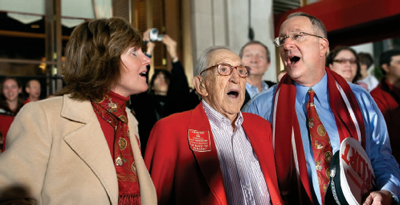 As I write, the Cornell campus is about to turn red and white with thousands of returning alumni whose class years end in "1" or "6." During Reunion Weekend, they will renew friendships, catch up on news about their alma mater, and share memories of their time on the Hill. Some of them will bring along their children in the hope that they, too, will one day join the Cornell family. They will marvel at how much the campus has changed since they graduated—whether five or fifty or more years ago. They will also celebrate the enduring essence of our University—the personal commitment of our faculty to teaching students at all levels; the breadth and depth of the inquiry carried out by our faculty and students; the creative spark and penchant for "thinking otherwise" that drives discovery; the diversity of our campus community, which remains open to people of talent from all backgrounds; and our embrace of public engagement, as we create and deploy knowledge to help lift the world's burdens.

This year, however, one of our most treasured alumni leaders will miss the festivities. Bill Vanneman, longtime president of the Class of 1931, passed away at age 102 a few weeks before what would have been his 80th Reunion—and the first 80th class reunion ever held at Cornell—which he was helping to plan. Bill had served as president of his class since he graduated, and he rarely missed a reunion. In fact, for the past two decades, he was a member of the Continuous Reunion Club—returning annually for Reunion Weekend in his Cornell blazer and red-and-white socks.

Robin and I first met Bill in November 2006 at the Sy Katz '31 Parade after the Cornell-Columbia football game. Bill had come to town to honor his late classmate and good friend, and to celebrate the Big Red with 500 or so other Cornellians. He embodied the pride and joy so many of us feel toward the alma mater, as he marched down Fifth Avenue with Sy Katz's children, Alice Katz Berglas '66 and Bob Katz '69, and teamed up with Bob and the Big Red Band to play a medley of Cornell songs on matching kazoos.

Among the many things I learned from Bill, three in particular stand out. First, optimism: that every challenge has its solution. Second: that Cornell is ever new and ever the same. And third: that the future is in our younger alumni.

A few years ago, when the Class of 2000 ran short on funds for their first reunion, Bill jumped in on behalf of the Class of 1931—for which he served as class correspondent as well as class president—to help with a contribution. And I know it was a source of great pride that just as he had followed his father, C. Reeve Vanneman, Class of 1903, to Cornell, his own sons, Bill Jr. '65 and Reeve "Ting" '67, as well as a daughter-in-law, two granddaughters, and a grandson-in-law have continued the family legacy at Cornell.

Bill was the namesake and first recipient of the Bill Vanneman '31 Outstanding Class Leader Award, created by the Cornell Association of Class Officers in 2005—and he embodied so much of what is admirable in class leaders and other alumni volunteers: a deep love of Cornell, along with the knowledge that we can always do better; an enduring connection to those who had shared the journey as members of his Cornell class; and a strong affinity for younger alumni classes. There will never be another Bill Vanneman. And yet, there are hundreds—no, tens of thousands—of alumni who, like Bill, love the Big Red and are willing to devote a big chunk of their lives to make it even more glorious to view.

Bill, your spirit will live on in our Reunion 2011 festivities, and you will continue to inspire us with your friendship, your enthusiasm, and your commitment to learning, to discovery, to service—in short, to Cornell.