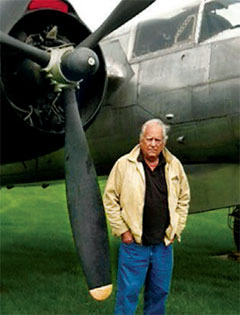 Each July, more than 20,000 aviation enthusiasts flock to Geneseo, New York, for the annual airshow—a two-day event featuring about eighty World War II-era aircraft, flight demonstrations, parachute jumps, historical re-enactments, and more. As president of the National Warplane Museum, Geneseo native Austin Wadsworth is responsible for staging the spectacle, which he calls “the greatest show on turf.” “Our museum and our show are based on getting close to the airplanes, feeling them, touching them, and getting your hat blown off when they start,” Wadsworth says. “It’s an amazing transport to a different time.”

Founded in 1994 and housed in a 30,000-square-foot hangar at the Geneseo Airport, the warplane museum displays more than a dozen vintage aircraft from World War II and the Korean War—from Piper Cubs to a B-23 bomber to a C-119 troop carrier. (Wadsworth’s favorite is a C-47 cargo plane that dropped paratroopers on D-Day; he hopes to send it to France for a re-enactment of the drop on the seventieth anniversary of the invasion next June.) Open year-round, the museum features a 7,000-volume library, offers tours, and hosts an educational program—named in honor of the Tuskegee Airmen—that brings in hundreds of inner-city schoolchildren each year.

A former agricultural economics major, Wadsworth is retired from a long career in land management and farming— giving him time to focus on aviation, his longtime passion. A licensed pilot himself—”I’ve flown everything that flies down there,” he says of the museum’s collection—he traces his fascination with vintage aircraft to his childhood during World War II. “Airplanes were the glamorous thing,” he says. “Every kid wanted to fly.” 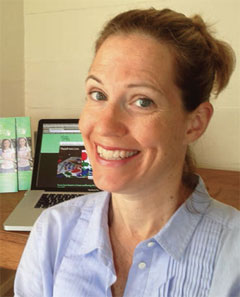 Meg Ragland loved her daughter’s artwork, but the clutter was getting out of hand. “It was stuffed in a drawer in my kitchen, totally overflowing,” Ragland recalls. “Every once in a while I’d go through and try to weed stuff out, but I’d feel bad about it—throwing out her creative endeavors.”

Ragland wasn’t alone; her cousin, whose daughter also loved making art, felt similarly guilty for “sneaking it out with the recycling.” An idea was born: in March 2012 the two launched Plum Print, an online company that consolidates children’s artwork into coffee table books. To order, parents mail in their kids’ art; the works are photographed and laid out, with proofs sent back to make sure the drawings are right-side up. (With children’s artwork, Ragland explains, it’s often hard to know.) The finished book is professionally printed and sent to the family—with or without the original artwork, per the buyer’s request.

A former communication major on the Hill, Ragland worked in the magazine industry in New York City after graduation, most recently at Family Circle, before moving to Asheville, North Carolina, where Plum Print is based. Now a mother of three, Ragland recently had a book made of her own childhood drawings. “My mom pulled them out, and I was surprised by the enjoyment my daughter got from looking at them,” she says. “It was funny to see my daughter say, ‘Oh my gosh, you made snowmen, too. You made Santa Claus, too.’ Otherwise, she would have never seen my artwork. It would have remained in my parents’ basement, probably forever.”