Bryan Walters '10 beats the odds and lands in the NFL

Bryan Walters '10 beats the odds and lands in the NFL

It isn't easy to jump from the Ancient Eight to the National Football League. This season, out of 1,696 NFL roster spots, just a half-dozen belong to Ivy Leaguers. So the odds were astronomical for former Big Red star Bryan Walters '10, an undrafted wide receiver, who looks like he could be, according to one ESPN.com writer, "a stunt double for Matt Damon."

Not that the 6-foot, 190-pound Walters isn't talented. He is Cornell's career leader in all-purpose yards (excelling as a kick and punt returner) and led the league in receiving yardage as a senior, when he was a second-team All-Ivy selection. He signed with the San Diego Chargers as a rookie free agent in 2010, but injured his knee in the first week of training camp and was released. Walters took a job as an unpaid assistant coach at his old high school in Kirkland, Washington, and signed to play with the Arizona Rattlers of the Arena Football League in the spring. "I made a goal just to get healthy and stay around the game," he says. But then the Chargers offered him a second chance, inviting him to join their practice squad. For the rest of last season, he was one of eight players who helped prepare the team for games but didn't suit up on Sundays. Heading into the 2011 season, he aimed to make the active roster. Prognosis: unlikely. 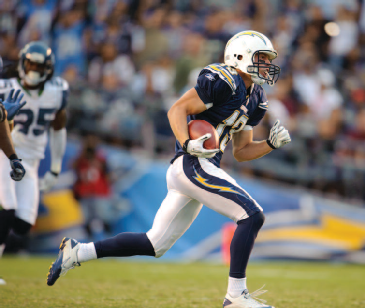 "I wanted to show the coaches that I could do it in a game," says Walters. "You never know when you're going to get thrown in there, and you've got to be ready if it's your one shot." That shot came during San Diego's first preseason game, against the Seattle Seahawks, on national television: he caught the ball in his end zone, raced up the middle, was nearly tripped up at the 35-yard line, regained his balance, veered toward the sideline, and outraced a flock of Seahawks for a 103-yard touch-down run.

That kick return alone might not have been enough to earn him a roster spot. But two weeks later Walters caught a game-winning touch down pass against the Arizona Cardinals. The play had been set up mo -ments earlier by an acrobatic catch in which Walters corralled a wayward pass by tipping it to himself.

Walters finished the preseason with ten receptions for 122 yards. In the pro cess, he became a fan favorite, known for working hard, running precise routes, and catching anything in the same zip code. "The best ability a receiver can have is dependability," Chargers quarterback Philip Rivers told a reporter for Southern California's North County Times. "Bryan is one of those guys you can count on." When judgment day arrived in September and the roster was reduced from 80 to 53 players, Walters joined Kevin Boothe '05, a backup offensive lineman with the New York Giants, as one of two Cornellians in the NFL this year. "To get through that day," Walters says, "was pretty exciting."

Like his team, Walters has had an upand-down season. He saw some game time right away, but then was relegated to the bench and cut to make room for a defensive player. The Chargers returned him to the active roster in November, but he's mostly watched from the sidelines since then. Still, he's shown that he has the ability to make big plays when called upon—so maybe, in his case, NFL won't mean Not For Long.

On December 5, Cornell quarterback Jeff Mathews '14 was awarded the Asa Bushnell Cup as the Ivy League Offensive Player of the Year. In the season finale against Penn, a 48-38 Cornell victory, Mathews threw for an Ivy League single-game record 548 yards and set the league's single-season passing mark with 3,412 yards. With two 500-plus yard games, Mathews had two of the top three passing games in Ivy history. He also set Cornell records for touchdown passes (25), total offense (3,274 yards), completion percentage (.679), and passing efficiency (162.60). A two-time national player of the week, Math-ews was one of four Big Red players to earn first-team All-Ivy honors; the others were wide receiver Shane Savage '12, placekicker Brad Greenway '11, and returner Rashad Campbell '12.

STRONG START Goalie Ben Scrivens '10 made his NHL debut a memorable one, stopping 38 shots to earn the victory as the Toronto Maple Leafs beat the Columbus Blue Jackets 4-1 on November 3. Scrivens started the season with the Leafs' AHL farm team, the Toronto Marlies, and posted a 4-1 record with a 2.41 goals-against average and a .908 save percentage before being called up to the parent club. Scrivens is the 29th former Big Red player, and the 10th goalie, to play in the NHL.

BEST IN BLIZZARD A historic snowstorm was the setting for a historic outing by the women's cross country team as the squad won its first Heptagonal title since 1998. On a six-kilometer course at Princeton that was covered in three inches of snow from a rare October Nor'easter, the Big Red edged Columbia by two points, led by Katie Kellner '13 in fourth (22:13.5) and Genna Hartung '13 in fifth (22:14.5).

CLEAN SLATE He's only a sophomore, but goalie Andy Iles is already etching his name into the hockey record book. During November, he strung together three straight shutouts as part of a goal-less streak that lasted 213 minutes and 35 seconds, second in school history to Ben Scrivens's mark of 267:11 two seasons ago. Iles was named the ECAC Goalie of the Month after posting a 6-2 record with a 1.69 goals-against average and a .936 save percentage. After a 2-1 overtime loss to Boston University at Madison Square Garden on November 26, Iles posted two more shutouts at Lynah Rink on December 2 and 3, making it five consecutive home games without a goal allowed—a Big Red record.

MOVING UP The 2011 season was a special one for the men's soccer team, which had its first winning season since 2001 and finished within two points of an Ivy League title. The Big Red posted an 8-2-6 record, its fewest losses since 1995. The offense generated 25 goals in 16 games, and the defense allowed only 13 goals—at one point going 505 minutes without allowing a goal, breaking the school record of 494 minutes set in 1977. Goalkeeper Rick Pflasterer '13 and defender Patrick Slogic '14 were both named first-team All-Ivy.