Jessica Dowling '03 was in charge of the medical team when a young mixed-breed dog came into the emergency room after being hit by a car. The animal, named Jerry, had no heartbeat and wasn't breathing. She and her colleagues gave him the resuscitative drugs epinephrine and atropine and performed CPR for twelve minutes in the hope of saving his life. "You look at your watch and say, 'Has it really been only thirty seconds?' " Dowling recalls. "It felt like it had been three hours."

In the end, Dowling and her team saved the dog's life—or, rather, his virtual one. Their patient was RoboJerry, a first-of-its-kind veterinary simulator designed by emergency medicine professor Dan Fletcher. Covered in brown fur with a lolling rubber tongue, RoboJerry helps train vet students, interns, residents, and technicians in emergency response techniques—offering a bridge between classroom work and front-line experience at Cornell's veterinary teaching hospital.

"I've consistently found that if I'm standing in the hallway talking to students about what they're supposed to do, they can easily rattle off, 'I would put a catheter in, I would give fluids, I would look at the blood work,' but when a case comes in and it's in bad shape, they completely freeze up," Fletcher says, stroking RoboJerry's synthetic fur in his lab in the basement of Cornell's Companion Animal Hospital. "This is an intermediate step. After the didactic training, you bring them into the lab so they can practice on this guy and get a sense of what it's like to deal with things in real time—to practice touching and handling and listening to him, going to the crash cart and drawing up the drugs. It's in no way meant to replace clinical experience, which is crucial, but to give them some extra training so they're more comfortable when it comes time to work with real patients and talk to real clients." 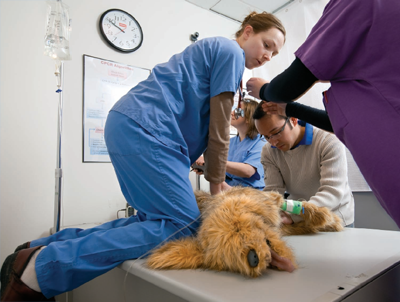 Simulators have long been used in human medicine, with computerized robotic "patients" becoming increasingly sophisticated. But those used in veterinary training are still rudimentary, Fletcher says, consisting of static models used to practice basic techniques like performing CPR or inserting a breathing tube. To make RoboJerry, Fletcher used grant funding from Cornell's Faculty Innovation and Teaching Program to purchase a $25,000 human simulator, which he disassembled; he then inserted some of the components into a static canine simulator, Critical Care Jerry, made by a California-based company called Rescue Critters.

With the help of a student from the College of Architecture, Art, and Planning, Fletcher cracked open the canine mannequin's foam core and inserted sensors and actuators from the human model. Now, RoboJerry's chest rises and falls, he has a pulse in his groin area, and he can be given drugs and IV fluids (they empty into a bag through tubes near his tail). As the students treat him, his vital signs are displayed in real time on an adjacent monitor. "It's a stuffed dog attached to some plastic tubing and it doesn't look that realistic, but you still felt like you had an animal dying in front of you," recalls Dowling, a fourth-year student who will serve in the U.S. Army vet corps after graduation. "As soon as Dr. Fletcher left the room, it felt like a realistic, stressful situation. Even though it was a stuffed dog, everyone was still serious about making the animal's heart start beating again. Psychologically, you felt like you'd saved someone's pet."

Fletcher uses the software from the human simulator to control RoboJerry's vital functions, programming preset emergency scenarios that the students must handle. So far, all the scenarios allow for a happy ending—as long as the student doctors make the right decisions. "The first scenario is usually not so good," he says, "but by the time we do the third one, the difference is amazing."

Since Fletcher unveiled RoboJerry in the spring of 2010, more than 100 students have "treated" him, and he has gone on the road to veterinary medical conferences. But the more he's used, Fletcher says, the more his limitations become apparent; for one thing, his foam core makes him stiff as a corpse, even when he's "alive." So Fletcher is seeking additional funding to develop a next-generation version with more sophisticated capabilities and fully articulated joints. (He has also built a feline version—dubbed RoboFluffy—but since he has only one set of computerized innards, only one simulator can be used at any given time.) "The veterinary market is tiny compared to the human market, and we don't have nearly as much money as they do in human medicine," Fletcher notes. "For a large human teaching hospital to buy a $100,000 simulator is not a big deal, but in a veterinary teaching hospital it's never going to happen."

With the help of students from the Johnson School, Fletcher is surveying vet schools, vet tech programs, and continuing education programs in the hope of convincing one of the three major makers of human simulators that the veterinary market is viable, so RoboJerry might someday go into wide production. He notes that such a simulator might also be useful to the military or to police departments who employ working dogs. "It's not like having a real dog in front of you, but it's pretty close," says Fletcher, himself the owner of two Great Danes weighing a combined 260 pounds. "It's fun to watch the students, because they get into it—they suspend their disbelief and they're really in the moment."

For Dowling, the exercise's biggest challenge wasn't so much the animal in front of her, but the humans beside her—making the team work together smoothly under the pressure of an emergency situation. "If you don't communicate well, if one person doesn't do something correctly, the whole thing could fall apart," she says. Giving students the freedom to fail—in a training-wheels environment where there's no bleeding dog on the table or weeping owner in the waiting room—is one of RoboJerry's biggest assets, Fletcher says. "The students can be completely in charge," he says. "I don't have to intervene at all, because they can't hurt RoboJerry. Well, they can; they've broken him a few times. But luckily, he's not a real dog, so it's OK. He can be fixed."