Amid piles of pomegranates and an ocean of arugula, Laura Avery '70 oversees one of the nation's top farmers' markets

Amid piles of pomegranates and an ocean of arugula, Laura Avery '70 oversees one of the nation's top farmers' markets

It's mid-day and mid-week in Santa Monica, California, but several city blocks are closed to cars. Instead, the crowds are trafficking in a seemingly endless selection of exotic fruits and vegetables, from spicy Hungarian peppers to Hosui Asian pears. Laura Dingle Avery '70 strolls among the vendors' stalls, inquiring and directing as if she runs the place. Which, in fact, she does.

Avery asks a few farmers how they've been selling and accepts a sample from one of them. "Mmmm," she says. "That's a good peach." She takes a call from a produce purveyor ("Hi, Sharon. Yeah, she ran out of mangoes…"), and then asks a woman to kindly remove her dog from the premises; no canines amid the sweet ambrosia cantaloupes, please. A farmer approaches Avery and apologizes for forgetting his payment check for his prized market stall. She waves it off, telling him next week is fine. Then she approaches another vendor. "So the pomegranates are just starting, huh? People are asking." She snaps a quick photo. "For my blog," she explains. 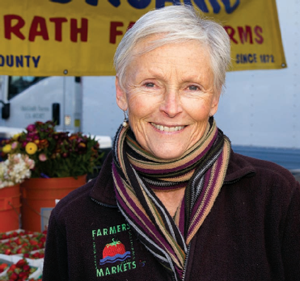 As supervisor of Santa Monica Farmers Markets, Avery has become the guru of what is—quite literally—a growth industry. When the Santa Monica Wednesday Market began thirty years ago, it covered a single city block and featured twenty-three farmers. Today, eighty farmers are peddling their goods across a four-block area. The program has added three markets under Avery's supervision—two on Saturday (one focusing on organic foods and another in a largely Latino neighborhood) and a Sunday event that includes everything from pony rides to live music. Combined, the markets draw an estimated 20,000 shoppers each week and gross some $13 million a year.

As supervisor, Avery acts as both a publicist (discussing seasonal produce on a Saturday morning radio show) and an educator (hosting quarterly panel discussions at the Santa Monica Public Library on subjects ranging from sustainability to small-scale meat production). But occasionally she has had to take on unexpected roles. Sometimes she's an investigator, banning vendors upon determining that they hadn't actually grown the produce that they were selling. A few years ago she found herself acting as mediator, diffusing a conflict that erupted when local chefs felt they were being muscled aside by wholesale produce companies buying in bulk. And in 2003, Avery was forced into the role of crisis manager after an elderly driver's runaway car barreled through the market, leaving thirteen dead and dozens injured.

Avery's involvement goes back to 1982, when she was hired to manage the Wednesday Market a year after it opened. She was an unlikely candidate, a native of the Midwestern suburbs—Shaker Heights, Ohio—with no agricultural expertise. At Cornell (where she followed grandfather Howard Dingle 1905 and father John Dingle '42 and preceded daughter Avery DeVenanzio Mathy '03), she had been a French lit major and a member of the women's fencing team, after which she had spent a peripatetic decade in a series of jobs. Upon arriving in Santa Monica, Avery's only experience with her neighborhood's fledgling market was browsing the stalls while pushing a stroller. But she was drawn by the vibrancy of a Wednesday wonderland. "It wasn't so much that I was interested in food, because I wasn't a great cook," she recalls. "It was the feeling that, wow, the street is closed, something is happening. It was an exciting place to be."

Avery was hired largely because her now ex-husband worked with the ex-husband of the previous manager. "We wrote our own rules," she recalls. "We basically made it up as we went along." Nearly three decades later, she has been touted by Los Angeles Magazine as one of the city's 100 most influential people. And the Wednesday Market—which Travel + Leisure has listed among the best in America—is the largest all-farmers' market in California.

While there are more than 300 certified farmers' markets in the state, Avery explains that most are "indistinguishable from a swap meet, because at least half of the vendors are non-farmers." However, all the products sold at the Wednesday Market are farm-grown (which can mean not only Shunkyo radishes and Adriatic figs, but chicken, cheeses, and worms for vermiculture). Thus, it is a true farmers' market, an opportunity for small family farms to reach consumers directly, offering high-quality produce at competitive prices. "I'm happy that the small farmers are able to come here and thrive," says Avery. "I think that's what I'm proudest of." As if on cue, a man selling oranges walks by and offers his two cents: "I'd be out of business if it weren't for this."

But the market has also been a boon to customers, garnering accolades for the variety of its produce. Indeed, Avery believes farmers' markets are the best way to maintain genetic diversity of crops. "If consumers are just going to take whatever comes out of a grocery store, they're going to be out of options," she says, walking past stalls offering everything from Persian cucumbers to French sorrel. As a result, many of L.A.'s most renowned chefs frequent the Wednesday market. "It inspires them," says Avery. "They say it reminds them of why they got into cooking in the first place."