It all started with bull semen.

In the late Eighties, Ed Zuckerman '70 was a freelance journalist for magazines like Rolling Stone when a friend working in TV made him an offer: Want to write for "Miami Vice"? The show—still on the air, though past its height of cool—was looking to shake things up by tapping non-TV writers to pen some episodes. Armed with facts gleaned from reporting on the international cattle trade, Zuckerman pitched "The Cows of October," in which Crockett and Tubbs track the theft of hundreds of thousands of dollars of . . . bovine reproductive material. "It was heavily rewritten," Zuckerman recalls, "to the point where, watching it with friends at home, I couldn't explain what was happening."

That's showbiz—which has been Zuckerman's profession ever since. Over the past two decades, the former Daily Sun editor-in-chief has served as a writer or producer on some two dozen crime and legal dramas, from big hits ("Law & Order," "JAG") to programs you've probably never heard of ("Century City," "Killer Instinct," "The Whole Truth").

These days, Zuckerman is back atop the ratings as an executive producer on "Blue Bloods," a drama that has bucked the dreaded "Friday night death slot" to become a hit for CBS, pulling in some 12 million viewers a week. The show stars Tom Selleck as Frank Reagan, police commissioner of New York City and pater­familias of a tight-knit clan of Irish Catholic cops. His grandfather was a patrolman; his father was commissioner before him; all three of his sons joined the family business, one dying in the line of duty. (His daughter handles the "order" side of the ampersand as an assistant district attorney.) "People love this family," says Zuckerman, who joined the show last summer, after the network ousted its creators between the first and second seasons. "They love the idea of it. In troubled times, people like to see something solid, safe, and wholesome."

"Blue Bloods" distinguishes itself from the pack of TV crime dramas by putting character ahead of cases; the crime-of-the-week is secondary to the relationships. Each episode includes Sunday dinner around the family table, with Selleck dispensing wisdom; it's "NYPD Blue" meets "Little House on the Prairie." "This is a conservative show, a traditional show," says Zuckerman. "The cinematography, the editing, and the music are old fashioned." In an episode that aired in mid-January, Commissioner Reagan struggled with an upcoming PR campaign, balking at using the 9/11 attacks to attract recruits. A conversation with his youngest son—a Harvard-educated lawyer who joined the force after his brother's murder—led to an epiphany about a more palatable sales pitch. "The adventures, the comedies, the tragedies—going to work every day with the feeling anything could happen and you'd be in the middle of it, making a difference," Reagan tells his staff. "And being part of a brotherhood that spans almost 300 years."

The show may not be destination television for the much-desired youth demographic, but it's a palpable hit with their parents and grandparents. Its average viewer age hovers just above sixty; when it premiered it fall 2010, Forbes declared it number one on its list of the "oldest shows on TV." "Friday night viewing was way down, but there was nothing on," Zuckerman says. "People are rising out of their graves or their deathbeds to watch this show, because it appeals to a traditional crowd. But people who are relatively young and liberal tell me they like the show. It's not sticking its conservative values in your face." The reviews have been pretty good, too; the New York Times said it has "an old-fashioned appeal both as drama in the vein of a workingman's 'Dynasty' and as splashy procedural," and that Selleck plays the lead "with such an easy authority that we're reminded how much we've missed him." 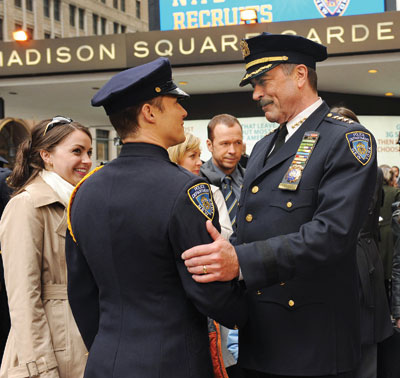 The show's production offices are located in a converted apartment building in Greenpoint, Brooklyn; neighbors include "The Good Wife" and "Royal Pains." Just down the block are soundstages with the show's three permanent sets: the commissioner's office, the Reagan family home, and a detectives' squad room. "This is a little studio," Zuckerman says, as the show's executive producer, septuagenarian TV legend Leonard Goldberg, views the dailies in the office next door. "It's like being on the lot at Warner Brothers—it's all done here."

Zuckerman dislikes the catchall term "showrunner," which implies that one person oversees an entire production—all but impossible—and says that his job essentially consists of being the head writer, akin to a newspaper's managing editor. In his office, near the customary display of cast head shots, sits a multi-volume collection of the annotated New York penal code—or, as he puts it, "the law books I stole from 'Law & Order.' " Of that now-iconic show's twenty-year run, Zuckerman worked on it for eight—in four separate stints—and contributed to more than 100 episodes, including the first one ever broadcast. But as Zuckerman notes in another lesson on the vicissitudes of the screen trade: "Between the time I wrote it and when it aired, [creator] Dick Wolf fired me."

The set of a TV show sounds glamorous—until you actually visit one. After two decades, Zuckerman compares the filming process to watching paint dry. "We shoot eight twelve-hour days for a forty-three-minute episode," he says, "which means for every hour you shoot, you get twenty-five seconds of airtime." And then there are the joys of dealing with networks and studios, which the former journalist says is "like having six editors, and two of them are idiots." But he enjoys the daily collaboration and the writing itself—crafting a clever mystery, telling a good joke, creating compelling characters. With a retired NYPD detective serving as technical adviser, "Blue Bloods" aims for verisimilitude—and it seems popular with real-life cops. "They do make fun of the fact that Frank Reagan wears his uniform a lot," Zuckerman says, "which is analogous to President Obama wearing a general's uniform because he's commander in chief."

So why does the character don those dress blues so often? "Because," Zuckerman says wearily, "Tom Selleck wants to."