As our newest graduates and their families and friends gathered in Schoell – kopf Stadium for Cornell’s 144th Commencement, a special guest—Charles F. Feeney ’56—was watching the ceremony from the Tanner Terrace. Unbeknownst to most of the graduates until I recognized him during my address, Chuck had profoundly influenced their Cornell experiences through his extraordinary philanthropy.

Over the last three decades, through the Atlantic Philanthropies, the foundation he created to put his wealth to use during his lifetime, Chuck has provided massive and mind-boggling support to Cornell. Among other initiatives, Chuck and Atlantic contributed to the support of almost 5,000 students while fostering their commitment to work and service through the Cornell Tradition Program. They also provided critical faculty support that has allowed the University to move into important new academic fields and build on strengths in such areas as the life sciences, social sciences, and humanities. And their gifts have changed the student experience at Cornell: through the Residential Initiative, which has resulted in new residence halls and programs that bring together living and learning on West and North campuses; in athletics, greatly improving our facilities and the competitiveness of our teams; and in the School of Hotel Administration, which has meant so much to Chuck.

Chuck has given more to his alma mater than any individual in Cornell’s history—nearly $1 billion to date—including, most recently, a transformational gift of $350 million for CornellNYC Tech, the applied sciences campus that we are building, in partnership with Technion-Israel Institute of Technology, on Roosevelt Island in New York City. 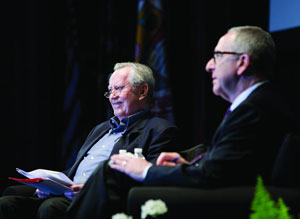 Chuck was a first-generation college student of modest means, but he had fresh ideas and a knack for thinking big. While at the Hotel school, he made sandwiches and sold them to students late at night to augment his $110-a-month GI Bill scholarship. He went on to make his fortune by pioneering the concept of duty-free shopping. Then, while still a relatively young man, he began to give his fortune away. To date, his foundation has given away more than $6 billion and plans to distribute its remaining endowment by 2016 and close its doors by 2020.

Because of Chuck’s deep concern for disadvantaged children, the elderly, and the marginalized, Atlantic has funded schools and hospitals in Vietnam, ameliorated poverty in South Africa, and built capacity for biomedical research in Australia. Using his own funds, he played a significant role in the peace process in Northern Ireland during the Nineties, and, through Atlantic, provided significant support to expand higher education in both Northern Ireland and the Republic of Ireland.

Chuck’s philanthropy has had a transformative impact not only on individuals and institutions, but on entire regions. And time and again—from Australia to Ireland and within the U.S.— Atlantic’s funding has leveraged additional support to accomplish multiple goals. For example, believing that Ireland’s prosperity depended upon its ability to generate new knowledge, Chuck convinced the Irish government to partner with Atlantic to fund high-quality basic research. Atlantic’s investment of $247.5 million was the catalyst for more than $1.5 billion in government funding that resulted in significant economic benefits across the length and breadth of Ireland.

More recently, Chuck encouraged Atlantic’s board to give $270 million toward the new Mission Bay medical campus of the University of California, San Francisco—helping combat cancer and cardiovascular disease through research and clinical care, inspiring other donors to invest in the project, and bringing jobs and economic development to revitalize the Mission Bay neighborhood.

Atlantic’s gift for CornellNYC Tech promises to be equally transformative for Cornell and the Technion. It will extend our capabilities for graduate education, applied research, and entrepreneurship. It has already attracted support from many of New York’s and the nation’s leading technology companies—such as Google Inc., which is donating space for CornellNYC Tech in its building in Chelsea for the next five years. And it will help make the city an even more effective environment for technological innovation and a magnet for world-class researchers, young entrepreneurs, and business incubators.

Chuck is known for saying, “I had one idea that never changed in my mind—that you should use your wealth to help people.” With the worldwide scope of his philanthropy and his commitment to “giving while living,” he is a model for our graduates, who gave him an emotional standing ovation during this year’s Commencement ceremony, and for us all. Thank you, Chuck!

This column, like most of my speeches and essays, owes an enormous amount to someone who has been crafting the communications of Cornell presidents for more than thirty years. Connie Kintner would much prefer to go unrecognized, but I want to let Cornell alumni know of this superb colleague.

Connie came to work at Cornell in 1974 as a writer with the News Bureau, and in the late Seventies began developing speeches for President Frank Rhodes, who had been at Cornell only a year or two. She did the job so brilliantly that soon she was helping with all his speeches and continued to do so for the rest of his eighteen-year presidency.

Along with superb writing skills, she brings to her job a vast knowledge of Cornell, resourceful creativity, and exquisite tact. Like others before me, I trust her good judgment on the right content and tone for countless speeches, essays, and other communications. Her contributions to Cornell are no less essential for being largely behind the scenes. It’s a pleasure to say it in the pages of Cornell Alumni Magazine for everyone to read: Thank you, Connie!