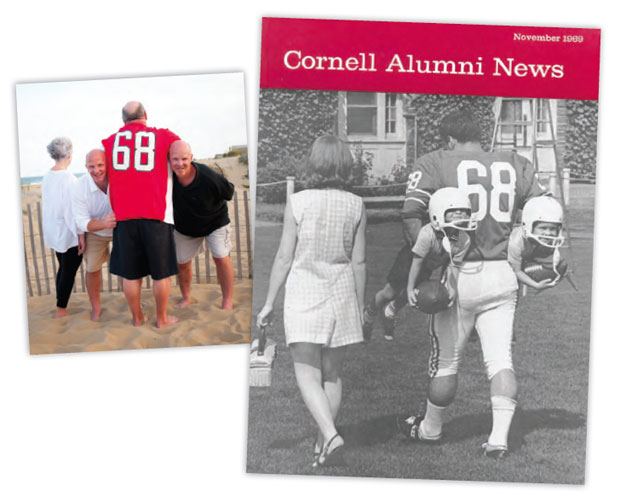 Gridiron grins:The photo recreated (Daniel is in white); the CAN cover.

When Dennis Huff ’70 scooped his twin sons under his arms during a photo shoot for the Big Red football team, he and his wife never expected the picture would appear on the cover of the Cornell Alumni News. Imagine their surprise when it was published in newspapers around the world: the photo was picked up by the Associated Press and appeared across the United States as well as in France, Vietnam, Germany, and Japan. “We have a scrapbook now,” says Dennis, a retired business manager. “It’s filled with the same picture, from all the different places it was mailed to us from.”

In the fall of 1969, Dennis was a senior business major in CALS and the team’s co-captain. Bonnie, his high school sweetheart and wife of four years, had just started what would become a nearly four-decade career in administration in the College of Human Ecology, including twelve years as assistant to the dean. “The boys were so identical, they played tricks on their friends,” Dennis recalls. “You can’t tell them apart now, let alone then.”

Fifteen years after the photo was taken, twins Daniel and David joined the Hotel school’s Class of 1988—and the freshman football team. Though they were recruited by the Big Red for their football prowess, neither played after their first year, opting to focus on academics. Today, the brothers look back at their parents’ multi-tasking skills with awe. “Now I realize that my dad had the responsibilities on the football team, he was married, and they had twins, all while he was going to school,” says David. “I don’t know how he did it. I don’t know how they did it.”

Dennis and the boys; the Huffs last summer.

For their fiftieth wedding anniver­sary, Bonnie and Dennis—who now live in Port Charlotte, Florida—rented a house near Virginia Beach, a relatively central location for the extended family. (Daniel is a New York State trooper, David an operations manager for FedEx in North Carolina.) Almost the entire family gathered there, including its new­est member: Daniel’s four-month-old granddaughter, Bonnie and Dennis’s first great-grandchild. Although Dennis can’t pick up his sons with the same ease as when they were four, he gamely agreed to pose with Bonnie and the twins for an updated version of the iconic photo that still holds great significance to them. “I have the November ’69 cover hanging on my living room wall,” says David. “Framed and matted, right next to my diploma.”