Howard Baum '79 is well aware that a visitor may be shocked by what he sees at the New Jersey Forensic Tech Center. It's not the thick vault door at the reception area, the sexual assault kit in an exam room, the human jawbone in the anthropology lab, or the concrete slab (which once encased a body) being examined in the vehicle bay.

No, it's the fact that it doesn't look like a TV crime show. 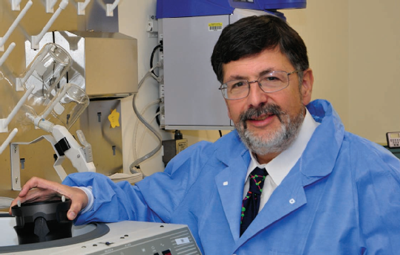 Here, at the largest of four state labs that Baum oversees as director of the New Jersey State Police Forensic Science Laboratory, the scientists don't visit crime scenes or perform autopsies. They each specialize in one area—toxicology, for instance, or drug analysis or arson. And they work under fluorescent overhead lighting, not the blue backlighting that makes modern forensics TV shows look like nightclubs. "And by the way, none of the women here is wearing stiletto heels," says Baum, as he gives a tour of the Hamilton, New Jersey, facility. "That's not practical."

But expectations are such that when a crew from "America's Most Wanted" came to chronicle the so-called Baby Bones case, they redecorated. "They decided it didn't look like a laboratory," Baum recalls. So the show folks brought in their own equipment and glassware, mixed hair gel and water to create colored solutions, and lit the room so dimly it made you wonder how anyone could detect anything at all. "The only thing in that laboratory that was real was our anthropologist," says Baum, smiling and shaking his head. "Everything else was rented or borrowed."

New Jersey has 561 police departments; all of them bring evidence (logged in by bar code) to the central laboratory or to one of the three regional labs. The evidence ranges in size from microscopic to so large that it has to be loaded into vehicle bays—cars, boats, even 4,600 impounded pot plants. "The whole building smelled like marijuana," recalls Baum, who earned a PhD from Brandeis after receiving his BS in biology from CALS.

Hired as director in March 2008, Baum oversees 175 scientists, evidence handlers, and administrative support staff, more than half of whom work at the Hamilton lab. Much of the microscopic work is done in the criminalistics lab, where scientists examine hairs and fibers, analyze paint and glass fragments, and study impressions of tires or footwear. Surprisingly, Baum insists one of the best sources for matching footwear impressions is zappos.com, because the website offers pictures of the soles of each of its shoes. "Most people use it as a shopping site," says Baum, whose Cornellian relatives include his wife, Ellen Zukofsky Baum '80, a brother, a sister, and a son recently matriculated into the Class of 2015. "We use it as a database."

The center's DNA lab comprises three units—nuclear DNA, mitochondrial DNA, and CODIS (Combined DNA Index System, a national database linked to the FBI). But Baum notes that—unlike on TV—DNA analysis isn't instantaneous. "It takes us longer than an hour. We do not pop it into a machine and out pops the match. There are many more steps," says Baum, who estimates average turnaround time to be closer to sixty days. "The important thing is quality, because people's lives are at stake. We have to make sure we're right."

Which isn't to say that Baum and his staff can't deliver when justice requires a quick turnaround. Last fall, a shooting at a Seton Hall University party left three injured and one dead. No one could identify the assailant—but the police knew that, on his way into the party, he'd gotten into a tussle and suffered a bloody nose. They called Baum on a Saturday morning; he received the blood sample and summoned his crew. Within two days, they had extracted DNA and found a match: a man who lived three doors down from the shooting.

Baum was a research scientist at Life-codes Corp. in Valhalla, New York, before being hired in 1990 as deputy director of the forensic biology lab in New York City's Office of the Chief Medical Examiner, a position he held for eighteen years. In the aftermath of 9/11, his duties included providing technical leadership in the effort to identify the tens of thousands of remains buried in the rubble of Ground Zero. Baum and the 100 scientists in his lab tested the limits of science during the process, described by his then-boss Robert Shaler as the "largest and most scrutinized forensic investigation in United States history." The remains of the World Trade Center victims were exposed to such high temperatures and pressure that their genetic material degraded—a phenomenon Baum calls "new ancient DNA"—requiring the development of new extraction methods.

Baum admits that for a while he had nightmares about his experiences following 9/11. But over the years he has learned to leave the atrocities at the office and to embrace the good that his lab achieves, whether it helps a case or not. "We examine the evidence, and wherever it leads, that's where it leads," he says. "You hear a lot about identifying and convicting the guilty, but I get great joy from exonerating the innocent." At the end of the day, he can even go home and watch TV. "As long," says Baum, "as it's not 'CSI.' "