The interview with Provost Kent Fuchs in CAM's January/February 2010 issue prompted considerable interest in the faculty group, chaired by Ed Lawler, that is leading the development of a strategic plan in parallel with our budget reduction and reorganizational initiatives—so I recently sat down with Professor Lawler, former dean of the ILR school, to get an update on their work.

David Skorton: What is the composition of your faculty group, and how is the work divided?

Ed Lawler: At the center of the effort is the Strategic Planning Advisory Council, consisting of eight faculty members who were chosen because of their academic distinction, broad perspective on the institution, and known capacity to work well in a group. In addition, there are four working groups, each focused on one of these topics: education, research, public engagement, and organizational stewardship. A total of sixty-three faculty, students, and staff serve on these groups.

DS: Since the faculty group was appointed last fall, where have you focused your collective efforts?

EL: On developing key goals and objectives for education, research, public engagement, and organizational stewardship, and then on specifying actions for achieving them. We first defined the questions and issues the plan should address, and then we sought input and advice from the working groups. Based on this input and our own analyses, we recently released a draft outline of the plan, which is available on the Reimagining Cornell website.

DS: Cornell's 150th anniversary is coming up in 2015. Is there a relationship between the strategic plan and the sesquicentennial? EL: The plan is directed at the 2010-15 period and, thus, we aim to envision Cornell at that moment in its history. In fact, the tentative title of the plan is "Cornell University at Its Sesquicentennial: A Strategic Plan for Excellence."

DS: What happens next?

EL: Provost Fuchs and I will consult and seek feedback on the draft from the Cornell community, while the faculty advisory group develops a small number of strategic priorities and initiatives as well as metrics for assessing progress. We expect to present a revised outline of the strategic plan with these additional elements in March. The full text of the draft version should be available in April or May. 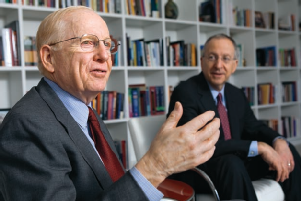 DS: The members of the faculty group are known for being strategic in their thinking and actions, but they are also diverse in background and academic discipline. How has that played out in your ability to develop a shared vision for Cornell's future? EL: All issues are examined from multiple perspectives. Not only does this provide important balance in our discussions, but it's a springboard for more inclusive, practical, and creative thinking and discussion about the University. I believe we're all learning much from each other.

DS: Has your own background as a former academic dean, as well as a distinguished professor in your own right, been important to the process?

EL: Aside from the broad knowledge and deep appreciation of the University that my deanship provided, I learned that for major tasks it's important to have a clear idea of what you want to accomplish in each and every meeting, to have an agenda that is realistic, and to have a sequence of interconnected subtasks across meetings. Maintaining focus on the larger task is essential to keep moving steadily and inexorably forward. I am a sociologist, and group interaction is my area of study.

DS: In thinking about Cornell's future, what assumptions have you made about financial resources? Has the prospect of reduced revenue constrained you in thinking about the ideal future for our university?

EL: We're working hard to identify actions that do not require financial resources, but are not reluctant to include some that do, to be realistic without compromising the long-term ambitions or aspirations. We assume Cornell will emerge from its current financial challenges stronger than ever and be ready to reach new heights. Some actions that require financial resources may have to be deferred in the short term, while the institution acts on those that don't.

DS: What's the most important thing for Cornellians to keep in mind as they review the strategic plan?

EL: That it is a draft and that we need feedback, which can be provided directly at the website: www.cornell.edu/reimagin ing/plan.cfm. We hope the plan is a stimulus for the Cornell community to move forward together to achieve our common goals and aspirations.