Steve Mazlin '81, BA '82, has perfected the whole dual identity thing. By day, he's a neurologist in Bucks County, Pennsylvania. By night, he travels to distant star clusters, explores misty nebulae, and watches galaxies collide. And he does most of it while he's sleeping. 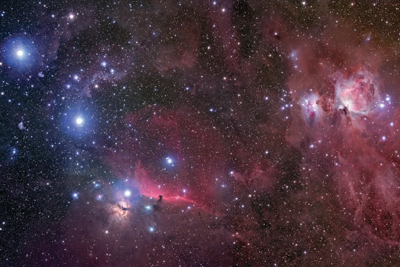 Mazlin is an amateur astrophotographer; he's part Ansel Adams, part Carl Sagan. His home and office are festooned with breathtaking images of the universe—the stunning colors and exotic shapes of wonders like Orion's Belt, the Whirlpool Galaxy, and the craters of the moon. In fact, eight of his images have been selected by NASA as its Astronomy Picture of the Day, which Mazlin describes as "the holy grail in astrophotography." And this despite the fact that he has never taken a course in astronomy or photography and didn't even own a computer until fourteen years ago. He is self-taught, a backyard hobbyist—quite literally.

In 1998, Mazlin constructed a rotating dome observatory 100 feet from his house. Inside the fiberglass structure are a telescope mount that turns to compensate for the Earth's rotation, a high-resolution and light-sensitive digital camera, and a laptop computer equipped with a planetarium program. With the bells and whistles he has added over the years, Mazlin estimates that the total cost of his passion has come to roughly $75,000. But the images are priceless. "It is an expensive hobby, there's absolutely no doubt," says Mazlin, who lives with his wife and two sons in Upper Makefield, about thirty miles north of Philadelphia. But he adds, chuckling, "Then again, I don't sail or play golf." 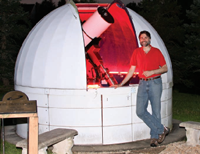 Mazlin does have another hobby: magic. He taught an Experimental College course in Willard Straight Hall as an underclassman, and you can watch a shell game routine by "The Great Mazlini" on YouTube. Mazlin sees a correlation between capturing an instant of deep-space wonder and a successful sleight-of-hand. "Astronomy is such a mystery, and when you watch a good magic routine you get that same gee-whiz feeling," he says. "In a sense, astrophotography is me wanting to make rational this totally irrational universe. Through the pictures, I'm saying, 'I may not be able to understand it, but here's what it looks like.'"

An amateur photographer since age eleven, Mazlin had his own darkroom in the basement of his childhood home on Long Island. Although he never took Astronomy 101 during his years as a chemistry major on the Hill, he was always mesmerized by the secrets of the universe—a fascination that first crystallized when, as a teenager, he glimpsed the rings of Saturn through a family friend's telescope. But Mazlin's two interests didn't collide until the late Nineties, when amateur astrophotography became possible with the emergence of sophisticated technology. Inside his ten-foot-wide, eight-foot-high backyard observatory are a twelve-and-a-half-inch reflecting telescope and a four-inch refracting telescope, as well as a digital camera developed specifically for astro-imaging. The camera includes two chips—one that locks onto a guide star to keep the scope on target and an imaging chip that reduces the thermal noise that creeps into ultra-long exposures (the shutter may be open for as much as an hour, as opposed to a fraction of a second for typical photography).

In the beginning, Mazlin used to camp out in his observatory until well past midnight, swatting away mosquitoes in the summer or braving the cold of winter as he continually adjusted telescope settings and manually rotated the dome to obtain multiple exposures over several hours. But now the dome rotates automatically, software allows the telescope to self-adjust, and he need spend only a few minutes setting up his imaging of the night sky. Then he can control everything from his in-house computer. "Hopefully, I'm mostly on autopilot once it starts running," says Mazlin, who estimates that there are a couple of hundred amateur astrophotographers at his elite level throughout the world. "If everything goes well, you have all your data when you wake up the next morning."

While Mazlin collects scientific data, his goal is aesthetic—turning the science into art. So processing the data—removing the effects of light pollution and digitally superimposing the various exposures—can take days, even weeks when mosaics of larger areas are being assembled. "You have to decide how you're going to combine the data, what you're going to emphasize, how much you're going to sharpen some areas and blur others, how you're going to adjust your color balance," says Mazlin. "All of that is the fun part. You want to come up with an image that is visually appealing, but also realistic."

Aiming to photograph the night sky as viewed from the Southern Hemisphere, Mazlin recently became a partner in Star Shadows Remote Observatory, a cooperative astro-imaging venture (operated with the University of North Carolina, Chapel Hill) that offers use of a professional installation in Chile. With the dark skies and steady air, says Mazlin, it is "one of the best locations in the world to do astrophotography." Mazlin can operate the installation's telescope remotely, imaging distant galaxies by tapping his iPhone.

Mazlin's photographs, which he sometimes sells ("virtually at cost," he says) to patients or visitors to his website (www. fourthdimensionastroimaging.com), are dazzling enough that they were displayed at New Jersey's Monmouth Museum a couple of years ago. His images have appeared in magazines like Sky & Telescope and Beautiful Universe, and his "Witch Head Nebula" photograph was chosen by UNESCO for its 2009 World Science Day poster. "People see a Hubble [Space Telescope] image and say, 'Oh, of course. They have a few-billion-dollar piece of equipment that's out there beyond the atmosphere,' " says Mazlin. "But a schlepper like me in my backyard without any formal training can accomplish something that looks pretty damn good."