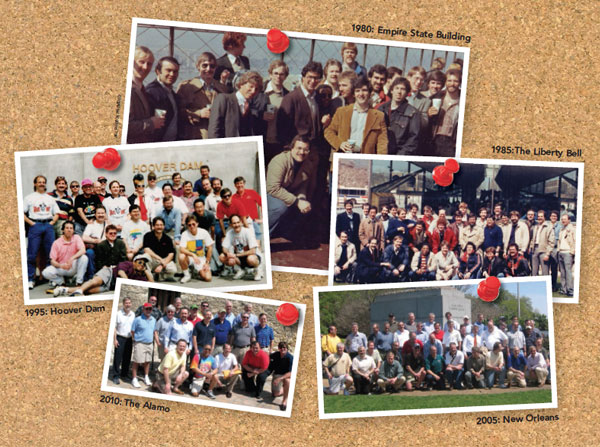 It’s high noon on the first day of April, and a group of Cornellians have come together in view of a suspension bridge—not a certain span far above Cayuga’s waters, but the one that crosses San Francisco Bay. The men, most in their late fifties and early sixties, gather around a statue of Joseph Strauss, the fellow who designed the Golden Gate Bridge, which gleams bright orange in the midday sun. As they shake hands, introduce significant others, and assess how the years have treated their old pals, the event has all the earmarks of a reunion. But don’t call it that. “We call it a convergence,” says Bobby Marks ’75, an actuary who’s the architect of the gathering. “Everyone is converging at this one spot.”

It all began 2,800 miles east and more than forty years earlier. During his junior spring, Marks and a handful of his Phi Kappa Psi brothers were sitting in the library of their fraternity house—as he puts it, “doing anything but studying”—when one of them bragged about having a photographic memory. Marks replied with a challenge: “Okay, April 1, 1980, let’s meet on the observation deck of the Empire State Building. You can’t talk about it ever again unless you’re inviting somebody. Let’s see how good your memory is.” Underlying the invitation was an understanding that, in an era before e-mail and social media, losing touch with your college buddies was a very real possibility.

Why the first of April? The idea was to choose an easily remembered date that wasn’t a family-oriented holiday. But, of course, there was also an intriguing uncertainty. Buck Briggs ’76 recalls thinking, “Is this an April Fools joke, or are people really going to be there?”

Six years after Marks issued his invitation, twenty-five Phi Kappa Psi members showed up—despite a snowstorm and a transit strike. (One brother who couldn’t make it managed to send a telegram to the top of the skyscraper.) They ordered some drinks, reminisced, and then Marks surprised the crowd by announcing that in five years—at noon on April 1, 1985—they would meet again, this time at the Liberty Bell in Philadelphia.

Thirty-two brothers attended the second installment—Marks keeps meticulous records—and the Convergence was born. Over the years, increasing numbers of Phi Psi alumni—a total of eighty brothers in all, their graduating years ranging from 1971 to 1984—have made the effort to travel to wherever Marks, the de facto decider, chooses.

‘OK, April 1, 1980, let’s meet on the observation deck of the Empire State Building.’Most attendees stay at a designated hotel, thanks to reciprocal agreements negotiated with other hoteliers by Jon Handlery ’78, whose family owns the Handlery Union Square Hotel in San Francisco. When the sun goes down, the Convergence-goers converge on a hospitality suite, trading decades-old stories deep into the night.

The time and date remain the same. In 2000 that posed a challenge, as most of the group arrived at Chicago’s Sears (now Willis) Tower just before noon—only to discover an hour-long wait for the elevator. Briggs “put a little of my lawyering to work,” explaining their tradition and predicament to security personnel, who were enamored enough to escort the brothers straight to the top floor, just in time.

Each year, the invitation is accompanied by a slogan. So after the “trek to the observation deck” and the call to “raise hell at the Liberty Bell,” Marks asked his brothers to “march to the Gateway Arch” in St. Louis (1990), “jam at Hoover Dam” in Nevada (1995), “drink beers at the top of the Sears” in Chicago, and—in a pre-Hurricane Katrina slogan that seems unfortunate only in hindsight—”Come hell or high water, we’ll meet in the French Quarter” (New Orleans, 2005).

Following a 2010 Convergence in San Antonio (“Meet your bro at the Alamo”), this spring a record fifty-five Phi Psi members showed up at the Golden Gate. They lingered at the Strauss statue, snapped the usual group photo, and prepared to head off to Fisherman’s Wharf for lunch. But first, Marks quieted the crowd and made his always-anticipated announcement about the next venue, declaring: “Let’s all plan to arrive at 525.”

That’s 525 Stewart Avenue, the address of Phi Psi fraternity house. So in 2020, the Convergence will converge on its birthplace.