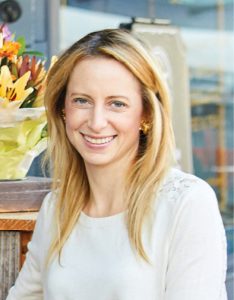 Marisa Sharkey ’97 faced a sartorial dilemma after her family moved from New York City to California in 2014. The longtime retail executive was entertaining at home more often, and she couldn’t find any cozy footwear that was chic enough to wear with her outfits. “It was like the only options were fuzzy slippers or heels, and you certainly don’t want to wear stilettos when you’re having friends over for a barbeque,” she laughs. “There was really nothing that looked great and also felt great.”

Unbeknownst to Sharkey, her friend Bianca Gates—then an executive at Facebook—was having the same problem. Out of the blue, Gates sent Sharkey a text message saying she had a terrific business idea: fashionable slippers. Sharkey immediately fired back an enthusiastic reply, and the two hit the ground running. Now they’re co-founders of the San Francisco-based brand Birdies, having created a new type of shoe that the company describes as combining the support of a sneaker, the softness of a slipper, and the style of a designer flat.

Ranging in price from $95 to $140, each pair of Birdies is crafted with luxe materials like silk, satin, and velvet, with some styles embellished with pom-poms, crystals, and detailed embroidery. A quilted, memory-foam insole and padding at the heel makes them so comfortable that Elle described them as “clouds for your feet.” That combination means they can be worn just about anywhere: at home, in the office, running errands—even to a wedding. “Our customer is a woman who is juggling many different things throughout the day,” says Sharkey, “and she can keep her Birdies on because they’re so versatile.”

She and Gates were ahead of the curve when they launched the company in 2015: according to market research firm NPD Group, sales of women’s sneakers and leisure footwear soared 37 percent in 2017 to $3.2 billion, while sales of high heels dipped 12 percent during the same period. Birdies relies on a direct-to-consumer approach; the company sells its shoes mainly through its website, though they’re also available at its flagship brick-and-mortar store in San Francisco and through a limited partnership with Nordstrom. Sales of Birdies jumped by 400 percent in 2018 over the previous year, with an even bigger increase projected for 2019.

That boom is partly due to Meghan Markle—the former actress and activist who became the Duchess of Sussex when she married the U.K.’s Prince Harry in spring 2018—whose fashion influence has led to massive boosts for whatever brands she wears. She’s been a Birdies fan for years, since she starred on the TV series “Suits”; impressed with Markle’s style and humanitarian efforts, Gates and Sharkey sent her a free pair soon after establishing the business. Markle loved them and started tagging Birdies on Instagram and posting photos on her blog. The brand really took off, though, when Meghan and Harry announced their engagement in November 2017—on the same day as Cyber Monday in America—and media outlets started talking about the “slippers fit for a princess.” Markle has continued to wear Birdies: during a tour of New Zealand last fall, the pregnant duchess was snapped in her favorites, the “Starling”—a black velvet smoking slipper—and subsequent demand led that style (and others) to sell out. The company ended last year with a waiting list of over 30,000. Says Sharkey: “There has definitely been a ‘Meghan effect.’ ”

A business management major in CALS, Sharkey began her career in investment banking and went on to earn an MBA at Penn’s Wharton School. As a consultant at Bain & Co., she advised Fortune 500 retailers and leading private equity firms on how to improve performance in apparel, footwear, and personal care. She next led corporate strategy at Ross Stores, the discount clothing chain. Having relocated to the West Coast for her husband’s job, she was looking for a new venture when Gates pitched the idea for Birdies. Since neither had a design background, the two bought slippers, sneakers, and flats at stores from Target to Barneys and ripped them apart to learn about the different components. “We were literally gluing fabrics together and watching YouTube videos to try to figure it out,” Sharkey recalls.

Once they had a prototype, they found a Chinese manufacturer willing to make the slippers—for a minimum order of 1,800 pairs. “We had no idea if they were even going to show up,” says Sharkey. “Then one day a truck full of slippers pulled up in front of my house.” They sold Birdies to family, friends, and friends of friends, and word-of-mouth spread from there; soon fashion stylists and celebrities were reaching out. With the help of $2 million raised in 2017 from private investors, the partners hired designers and a PR firm to support the company’s sudden growth. They landed another $8 million in funding earlier this year, which they’ll use to employ additional staff, build inventory, and create new lines. And last spring, around the time of Meghan and Harry’s first anniversary, they launched a bridal collection—including a velvet mule, decorated with a silky pom-pom, that resembles a custom pair that Birdies gifted Markle in advance of the royal wedding.