As you enjoy the spectacle of the London Olympics on your wide-screen TV, spare a thought for Bucky Gunts ’72. The veteran NBC director will be hard at work behind the scenes at his tenth Olympics, overseeing more than 2,000 hours of coverage across multiple networks. But he tries not to think about how many people—some 215 million Americans—will be watching. “I think,” he says, “it might freak me out.”

While you watch the London Olympics on TV, veteran NBC director Bucky Gunts ’72 will be running his own marathon behind the scenes

Ricky Gervais could barely contain himself. At the 2010 Emmy Awards, the creator of “The Office” (and award-show provoc­ateur) was about to deliver the prize for Outstanding Directing for a Variety, Music, or Comedy Special. Among the nominees—for shows like the Oscars and the Tonys—was a fellow named Bucky Gunts, who directed NBC’s coverage of the opening ceremony at the Winter Olympics in Vancouver. “I hope it’s Bucky Gunts,” Gervais said as he prepared to open the envelope containing the winner’s name, “because I didn’t know you could say that on television.” Then he grinned. “Let’s face it,” he added, “we’re all Bucky Gunts here.” Soon the name—which was indeed inside the envelope—became the number-one trending topic on Twitter.

The Emmy was the fourth that Bucky Gunts ’72 has won for directing an Olympic opener. The basement of his white Colonial in Wilton, Connecticut, contains eighteen more, the spoils of a career directing studio shows like “NFL Live” and sporting spectacles ranging from golf’s Ryder Cup to the Super Bowl pregame; the walls are adorned with banners from various Olympic venues. Gunts’s globetrotting has taken him to Salt Lake City and Sydney, Atlanta and Athens, Barcelona and Beijing. 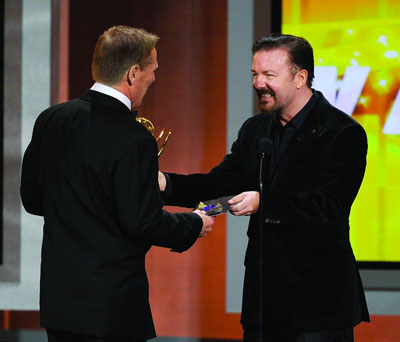 Beginning in 1964, Australian sailor Hubert Raudaschl competed in a record nine straight Summer Olympics. This month in London, Gunts will make his tenth appearance. He isn’t an Olympian, but his task is Herculean: as head of production for NBC’s Olympics coverage, he is ultimately responsible for the presentation of some of the most viewed events in U.S. television history.

NBCUniversal plans to telecast more than 2,000 total hours of the London games, including 272.5 hours on flagship NBC (about fifty more than four years ago in Beijing) and extensive coverage on its ever-growing collection of cable channels (among them CNBC, MSNBC, Bravo, Telemundo, and the newly acquired NBC Sports Network). “We’re on more networks for more hours than ever—again,” says Gunts, who supervises all broadcast and cable television production units for the Games. “Every Olympics, it’s more and more and more.” The breadth of coverage should translate to more than 215 million American viewers. That would break the record set during the Beijing Olympics, which surpassed the total set in Atlanta in 1996. But Gunts tries not to dwell on the number of people watching. As he puts it: “I think it might freak me out.”