Welcome to the March/April 2015 issue of Cornell Alumni Magazine—my first, and one devoted entirely to the 150th anniversary, the extraordinary breadth and diversity of the University, and the Cornell experience past and present.

See our “Class Acts” feature for more about this shot

I arrived at CAM just as plans for the issue were ramping up. We were determined to create something memorable, so it’s been an intense few weeks. But it has also provided me with a wonderful opportunity for a crash course in all things Big Red from the alumni perspective, and already Cornell is feeling very much like a second home.

A native Brit, I’m a graduate of Oxford University (and looking forward to my own reunion this coming June). I’ve been on Cornell’s campus since 2010, teaching media writing in the Department of Communication in CALS, having spent the previous twenty-five years in the publishing industry in New York City and London. I love teaching, but I missed the hands-on aspects of creating a magazine and couldn’t be more thrilled to be joining CAM at this significant moment in the University’s history.

Having been lucky enough to have had an incredible undergraduate experience myself, I understand what it is to be a devoted alum. But I’m learning that there is something truly unique about Cornellians.

I discovered years ago that you are singularly enthusiastic, intensely connected, and proud of your alma mater. (It is impossible to live in New York City for thirteen years and not run into a few of you.)  But it wasn’t until I witnessed life on the Hill firsthand that I fully began to grasp what drives this deep affection.

It seems to me that there’s something about the combination of the University’s “central isolation” and the vagaries of Ithaca’s weather, coupled with a land grant mission and Ezra Cornell’s aspirations for rigorous study open to all, that creates a perfect storm of allegiance.

I’ve certainly gathered that experiences outside the classroom are as formative as those within—which is why we are paying homage not only to lofty educational aspirations, ground-breaking innovations, and teaching excellence, but also to a beloved late-night food truck. 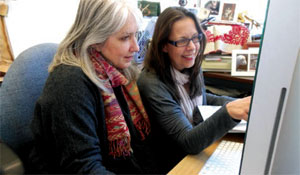 I’m also learning that Cornellians have strong opinions and like to share them. We’ve taken a decidedly subjective stance in some articles, so we fully expect to be hearing from you on those.

One of our more ambitious ideas involved gathering award-winning teaching faculty together for an historic group photograph. So enthusiastic was the response that we outgrew our original venue, but we finally settled on what proved to be the perfect dramatic backdrop—the Physical Sciences Building’s Baker Portico, an appropriately Sesqui blend of old and new. Participants used the occasion as a rare chance to catch up with old friends, and it became a rather magical moment for me, with the sun setting behind a snow-covered (naturally) East Avenue and clock tower and the brain power and camaraderie in the room palpable. I have to thank the CAM team for all their help in making it happen so seamlessly—homemade refreshments and all.

I follow in the footsteps of ten talented and inspirational editors who have succeeded in creating immense pride in this 115-year-old publication among its readers. I welcome your suggestions for making it even greater at Letters to the Editor, Cornell Alumni Magazine, 401 East State Street, Suite 301, Ithaca NY 14850, or via e-mail at jbarnett@cornell.edu. I do hope you enjoy this commemorative issue. It’s intended to provide an opportunity to engage, debate, and reminisce, be reminded of your own personal Cornell, and celebrate what the University represents today.

Wishing a happy birthday to you all . . .