Between 1873 and 1934, more than two million European immigrants boarded Red Star Line passenger ships steaming out of the North Sea port city of Antwerp, Belgium, bound for the U.S. and Canada. About a quarter of those travelers were Jews fleeing Czarist Russia or, later, Nazi persecution. Sonia Pressman Fuentes ’50 was one of them. The future co-founder of the National Organization for Women was five years old. “People always ask me what I remember about that time and I have to give them the same old, sorry answer,” Fuentes says. “My memories start at age six, in an apartment in the Bronx.” 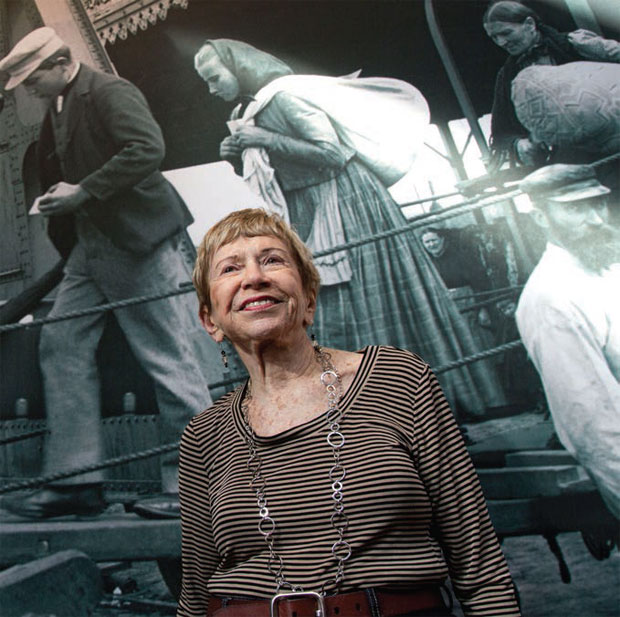 Fuentes is the second child of Zysia and Hinda Pressman, Polish-born Jews who resettled in Berlin before World War I. The family ran a prosperous men’s clothing business when Adolf Hitler rose to power. Believing that fascism was a passing phenomenon, Zysia Pressman did not want to leave Germany. But Fuentes’s eighteen-year-old brother Hermann understood the risks and fled to Belgium to stay with cousins, imploring his parents to join him. Within a year they did, cutting a deal with Nazi officials that left them with a fraction of their wealth—but with documents allowing them to leave.

They found that Antwerp was no haven. German refugees were granted visas and work permits in Belgium, but Jews of Polish origin were not. Her family’s repeated requests to stay were denied, and an order of deportation was issued. The family later learned that, as their ship steamed toward New York City, Belgian federal police had come to the family’s apartment to force them to leave the country.

After a failed effort to run another clothing store in Manhattan, the family moved from the Bronx to the Catskills, where Fuentes’s parents operated a vacation community in the heart of the Borscht Belt. She graduated from Cornell Phi Beta Kappa with a degree in psychology—then learned the hard way that, even for a woman with an Ivy League education, many Fifties-era jobs “required a knowledge of shorthand.” She worked in secretarial posts for several years before enrolling in law school at the University of Miami—at a time when women comprised only about 3 percent of U.S. attorneys. She went on to become the first female lawyer in the general counsel’s office of the Equal Employment Opportunity Commission and, with Feminine Mystique author Betty Friedan and others, a co-founder of NOW. Fuentes retired in 1993 and published a memoir, Eat First—You Don’t Know What They’ll Give You: The Adventures of an Immigrant Family and Their Feminist Daughter.

Last September, Fuentes was a guest of the Belgian nation for the ceremonial opening of Antwerp’s Red Star Line Museum, which commemorates the lives of the line’s passengers. Most of the museum’s exhibits are based on stories told by surviving relatives; Fuentes, now eighty-five and living in Sarasota, Florida, is one of the few Red Star passengers known to still be living. Her September visit marked her second trip back to the city where her family escaped the Holocaust, traveling to America on the SS Westernland II—the same ship that had carried Albert Einstein six months earlier. “We would have been killed in Germany had we remained there,” Fuentes told the media at the opening. “We would have been killed in Belgium had we remained there. And we would have been killed in Poland if we had been deported there. The Red Star Line saved all our lives.”