According to a 2011 Marist Poll, American kids still rank firefighting among their top ten dream jobs—putting it at number five, below pop singer but above police officer. That fact elicits a wry smile from Tom Parsons '82, who celebrated his first anniversary as Ithaca's fire chief in October. These days—especially considering the City of Ithaca's current budget crunch—the fires that Parsons puts out tend to be of the administrative sort. "Unless something major occurs, I'm usually at my desk or at a meeting," he says. "It's rare that I have to go out on a call. There's a lot of paperwork to this job." 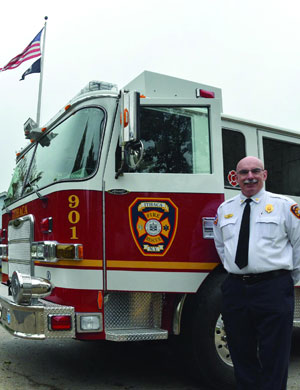 So Parsons seizes any chance to get outdoors; in good weather, he often grabs lunch at the Ithaca Commons hot dog stand. One weekday in September finds Parsons—clad in navy blue dress pants, a crisp white shirt with EMT patches, and heavy black shoes—walking a quick-time pace to the Commons from Central Station on Green Street, a four-block commute. He's built like a fireman from central casting, standing a fit six-foot-three with a moustache, shaved head, and military bearing. At least a dozen locals greet him; he clearly enjoys the casual ex­changes, nods, and handshakes. "I like working within the community and being a player in its development," says Parsons, who serves on a local board of education and chairs the youth exchange committee at the Ithaca Rotary Club.

After lunch—his standard fare is two dogs and a drink—it's time for a firefighter's tour of Ithaca. In his shiny red chief's truck, Parsons drives to West Hill, South Hill, and East Hill. He stops at the EcoVillage co-housing community, which is expanding; Ithaca College, which is also expanding; and Cornell, which is always expanding. Along the way he points out housing developments—some completed, more under construction. It's clear that, from a fire chief's point of view, the City of Ithaca is more than the sum of its buildings; the IFD's responsibilities increase annually. "One of our biggest firefighting challenges in this city is simply the terrain," Parsons says. "We're either going uphill or downhill."

And those ladder trucks and tankers roaring uphill—mostly up East Hill—answer a remarkable number of false alarms at no small expense. But don't blame student pranksters; malicious false alarms are rare. Cornell's research facilities require highly sensitive fire, smoke, and chemical detection systems, Parsons explains—and they can be set off by minor atmospheric changes. To underscore his point, Parsons pulls up to a windowless, single-story cinderblock building in an agricultural research area off Game Farm Road. Inside are some of the world's most pernicious crop- and timber-destroying insects, under study for pest control management. "This building is specifically designed so that in case of emergency, only people get out, not insects; that's not so easy," he says. "There are a lot of highly sophisticated labs on this campus with advanced safety and fire equipment. Each has its own particular challenges."

A Western Massachusetts native, Parsons majored in meat science at Cornell. Junior year he volunteered as a bunker, living rent-free at one of the city's fire stations in exchange for undergoing firefighter training and responding to emergencies. "A friend did it and it looked pretty neat and practical, so I thought I'd give it a try," says Parsons. "It saved me on rent and I learned a lot about working with people." Parsons stayed with the bunker program until graduation, when he realized that he and his classmates were facing a bleak economy. "There was a recession in full swing," says Parsons, now the married father of five children aged five to twenty-eight. "I liked it here and wanted to stay."

He was hired by the fire department in nearby Slaterville Springs, transferring to the IFD three years later. He eventually became a certified paramedic and was promoted to lieutenant in 1993. One of his most challenging days on the job came in January of that year, when a senior was found dead in the chimney of Psi Upsilon fraternity house. Parsons went out on that call; the student, who had been missing for three days, had asphyxiated after apparently attempting a prank that went awry. "That was a terribly hard assignment for everyone," Parsons recalls. More recently, his department responded to a late-night blaze that engulfed a student rental house on Cook Street in Collegetown in May 2011, killing a resident. "We've had a few student deaths due to fire," he says, "and they always remind us that this job is all about preventing those kinds of tragedies."

Parsons became assistant chief and fire marshal in 2005; two years later he added deputy chief to his resume. In October 2011 he was appointed chief by then-Mayor Carolyn Peterson, his selection unanimously endorsed by Common Council. Peterson's successor, Mayor Svante Myrick '09, is currently wrestling with a $3 million budget deficit—and police and firefighting jobs are on the chopping block. While Parsons is prepared to defend his fair share of municipal funding, he says he's aware that his department will have to make sacrifices. Cruising back to Central Station after his three-hill tour of the IFD's vast and varied territory, he starts thinking aloud.

"Maybe," he says, "I should take the mayor on this ride."