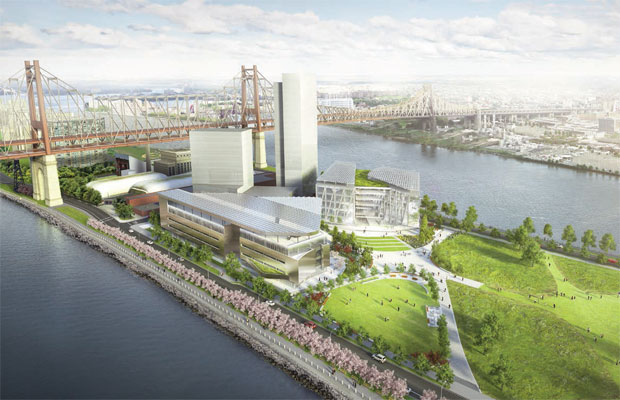 Future perfect: The first phase of construction will include an academic building, a corporate co-location building, and a residential building.

Just over two years after Cornell and our academic partner, Technion–Israel Institute of Technology, were named the winners of New York City’s applied sciences campus competition, Cornell NYC Tech is preparing to break ground on an innovative, sustainable new campus in the heart of the city. On December 19 at a city press conference, President Skorton and Mayor Bloomberg signed a lease between Cornell and New York City turning the Roosevelt Island site over to the University. Now the work of building a spectacular campus can begin.

Cornell Tech is a revolutionary model for graduate technical education, forging a new intersection between academia and industry. It’s a staging ground for what’s next, fueling groundbreaking research and inspiring entrepreneurial thinkers who will create the technology that reinvents the way we live.

Cornell Tech opened its doors in July 2012 in temporary space provided by Google. We will be running all campus programs out of this space until 2017, when the permanent campus on Roosevelt Island opens. That site will cover more than twelve acres, with glorious waterfront views. It is easily accessible by subway, the tram to Manhattan, and a bridge to Queens. The first phase of development will include at least three significant facilities: a flagship academic building, a corporate co-location building, and a residential building, as well as several acres of public open space.

As Cornell Tech is based on innovation, the physical campus will break new ground in every way. The academic building is being designed by Pritzker Prize-winning architect Thom Mayne of Morphosis and will set the tone for the entire campus. The building will be a big departure from traditional academic facilities, taking its cues from the tech world by offering open-plan space and extensive collaborative workspaces that encourage creativity and interaction among students, faculty, researchers, and industry partners. The building will have an oversized central internal staircase to encourage energy-saving walking and constant social interaction. A ground-floor café will spill into the outdoor space, welcoming the public. The building was designed with net-zero aspirations, most clearly visible in its prominent solar canopy.

At the heart of the campus, across a public plaza from the first academic building, will be the corporate co-location building, designed by WEISS/MANFREDI and developed in partnership with Forest City Ratner Companies. This building defines the mission of fusing academia and industry to encourage innovation for the public good. Just as the academic building acts as a mixing bowl, the co-location building will bring together corporate innovators, world-class researchers, and energetic start-ups under one roof. It is central to the campus and Cornell will be an anchor tenant—a unique and vital approach.

The residential building—with housing for faculty, staff, and students—will be designed by Handel Architects and constructed by Hudson/Related. Providing convenient and affordable housing is critical, and it will ensure that the campus is active 24/7.

Finally, we continue to work on plans for a possible executive education center/hotel. This facility will help ensure that Cornell Tech is a magnet for innovation by providing conference, executive program, and academic workshop space in conjunction with an exciting hotel and destination restaurant. Plans for this building are still in the early stages, but our hope is to open it in the same general timeframe as the others. Stay tuned—we look forward to keeping you apprised of our progress on the academic programs as well as the site development through these periodic updates in CAM.

For more on the progress of Cornell Tech, go to: tech.cornell.edu or follow us on Twitter@cornell_tech.