Stephen Colbert has become a TV star—not to mention a cultural phenomenon— thanks to his combination of deft political satire, erudite comedy, and tongue-in-cheek egomania. Among the creative minds behind his award-winning show are two Delta Gamma sorority sisters: staff writer Meredith Scardino ’98 and producer Liz Levin ’98. A visit backstage to “The Colbert Report,” as Scardino and Levin talk about working for America’s

"Out! Out! Out!" he says, as he shoos two of his employees, writer Meredith Scardino '98 and producer Liz Levin '98, from an office on the first floor of the "Colbert Report" studios in Manhattan.

After a full day of work on his late-night TV program, which runs for a half-hour on Comedy Central four nights a week, Colbert has just finished taping the show. He bantered with the 150 audience members waiting in line on West 54th Street, then morphed into a self-aggrandizing demagogue when the cameras were turned on. Col-bert bragged about his portrait going up for auction ("It's twice as good as Van Gogh's self-portrait because I have two ears"). He chastised President Obama for "making the classic Democratic mistake of not being Ronald Reagan" and mocked the Administration's choice of names for a military operation in Libya ("Odyssey Dawn? That's a Carnival cruise ship"). Finally, he interviewed special guest Steve Martin and even sang backup while Martin played the banjo.

It has been a long Monday, and it's nearly 9 p.m. Colbert is still wearing pancake makeup and a red power tie as he dismisses Scardino and Levin, shuts the door, sits down, and smiles. That's when the man behind the caricature emerges. It turns out that the real Stephen Colbert is a mensch. He just doesn't want his employees around while he gushes about them. "I don't know what they do to people at Cornell. I don't know what they inject them with. Maybe it's in the gorge water," he says. "But both Meredith and Liz have this unbelievable energy, always ready with an idea."

Colbert continues in this vein for several minutes and then, the interview over, he opens the door and spots the two women standing nearby. Narrowing his eyes, he wags a finger at them in an attempt at intimidation. "I'll see the two of you early tomorrow morning."

Levin sat down for her first interview, rummaged through her purse and couldn't find a thing to write with. 'Oops,' said Colbert in a pseudo-imperious voice that she would come to know well, 'now you need an A just to get a B.'Understanding the host's satirical point of view is one of the joys and challenges of writing and producing for "The Colbert Report." Pronounce it correctly, please. Both T's are silent, further emphasizing the inflated ego of Colbert's character, described by the man himself as "a well-intentioned, poorly informed, high-status idiot." He is Bill O'Reilly on smug steroids, addressing viewers as "the Colbert Nation" and inviting them to "take a spin in the no fact zone." He sits behind a C-shaped desk, despises anything French, and tortures logic, saying things like "George W. Bush: great president, or the greatest president?" Says Colbert, "Generally speaking, everybody has a learning curve in terms of getting the character's voice down."

Liz Levin got a glimpse of that character in her first job interview with Colbert. Born and raised in Newton, Massachusetts, she had been an American studies major in the College of Arts and Sciences and a member of Delta Gamma sorority, where she met Scardino. Both were athletes; the six-foot-two Levin played on the Big Red basketball team for three years, and Scardino was a captain of the women's lacrosse team as a senior. But they bonded more over a shared sense of humor. Following graduation, Levin moved to Jerusalem for six months and mused on a directionless future. "I used to think: what job would I hate the least in the whole world?" she says. "At the time I thought 'The Simpsons' was the funniest thing. I figured the people who make that probably sit in a room and laugh."

She moved back to the States, where playwright David Mamet set her on a career course. He was in Newton filming a movie, and Levin snagged a gig as a production assistant. By 2003, she had moved to New York, starting as a PA on MTV's "Boiling Point," a hidden-camera prank show. Although it may sound light years from Colbert's well-informed humor, Levin insists it was "as good an introduction to TV as I could have hoped for, because there's nothing harder to produce than hidden camera." When "Boiling Point" ran its course, Levin worked on another short-lived MTV program, "Trailer Fabulous"— believe it or not, a trailer park makeover show.

Frivolous or not, the shows were hands-on training for a would-be field producer tasked with turning random stories into funny segments—wading into a quirky subculture, emphasizing absurdity, finding humor in interactions. So when Colbert, fresh from a breakout role as a correspondent on "The Daily Show," prepared to whip up a brew of writers and producers to launch his spin-off in 2005, Levin cast her résumé into the cauldron. Having downloaded everything she could find about Colbert, she felt eminently prepared—except she didn't have a pen. She sat down for her first interview, rummaged through her purse and couldn't find a thing to write with. "Oops," said Colbert in a pseudo-imperious voice that Levin would come to know well, "now you need an A just to get a B."

Colbert laughs. "It's true. I might have been that big of a jerk to her," he recalls. "But the person who came in before Liz was one of the least funny people I've ever seen and had one of the worst interviews. Liz was just so full of energy and so bright and was such a breath of fresh air. She had ideas immediately, and that's all I needed." For her part, Levin shrugs. "Honestly, I'm still waiting for them to figure out that I don't belong."

She is now a senior producer in the field department, her job being to pitch segment ideas, direct the location pieces to which she is assigned, and edit them into five-minute comic masterpieces. Occasionally, this might mean a shoot in Manhattan, like the recent segment in which the show flew in an expert on royal protocol from England, as Colbert prepared for his inevitable invitation to Prince William's wedding. But usually her assignments take her farther afield: To Los Angeles, for instance, where she filmed the auction of property belonging to disgraced Congressman Randy "Duke" Cunningham (with only $200 to spend, the underfunded correspondent wound up taking home the "Welcome to the Auction" sign). Or to Tennessee, where Levin profiled a state senator who had pushed through a law making it legal to carry a concealed weapon into a bar. "Finally," said Colbert, the segment's narrator, "you won't need a bartender to get a round of shots."

One of Levin's favorites was a three-part segment (always a coup for a field producer) for a recurring bit called "Stephen Col-bert's Fallback Position," in which Colbert trains for another profession, just in case even a national treasure like himself falls victim to the struggling economy. "If this pundit job falls through," Colbert explained, "I'll have to take another job that's less important—like astronaut." So last year Levin, Colbert, and crew traveled to the Johnson Space Center in Houston, where Mark Kelly (husband of Representative Gabrielle Giffords, MRP '97) joined Colbert in a simulated shuttle launch.

Levin prefers segments that include Colbert himself, which usually requires filming on Fridays (the show is taped Monday through Thursday), but also means "you know it's going to be good." In fact, although Levin and the show's writers contribute clever quips to each field piece, there are times when an interviewee will say something that begs a witty retort. Levin will know there's something funny in there; Colbert will often come up with it on the spot. "I think I have a lot more of Stephen's sense of humor now," Levin says. "I've adjusted. I see the world through these different comedy eyes." 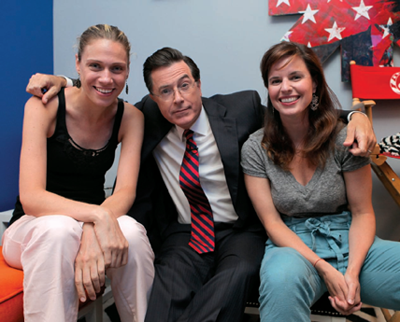 Regarding pitching stories, Colbert says, "There are no bad ideas. Nothing is too stupid." But on occasion, Levin and her fellow field producers will propose segments that seem to be a bit too much fun, and Colbert will call them on it. "Oh, great idea you have for a segment… in Bermuda," he'll say. Or like the time Levin, one of the legions with a crush on a particular New England Patriots quarterback, pitched "Fallback Position: Tom Brady." It didn't fly.

Levin points to a trip to a war zone as her most rewarding professional experience. First, she accompanied her boss to South Carolina for a two-part segment called "Stephen Strong: Army of Me," where, as Colbert put it, "I went to basic training… the full ten hours." A few weeks later, Levin was the only field producer to accompany Colbert to Iraq for six days, where they taped four shows and aired the basic training segments in front of an audience of U.S. soldiers at Saddam Hussein's former palace in Baghdad. "I've never been prouder of a job," says Levin. "I never thought I'd have the opportunity to say thank you in person to these guys who put their lives on the line for us."

Of course, the poignancy was laced with the usual dose of hilarity and social commentary. In one segment, the soldiers watched as Colbert peered up at a daunting climbing and rappelling wall, turned to his grim-faced drill sergeant, and asked, "If I'm gay, do I have to do this?"