Assigned reading: Laura Brown, vice provost for undergraduate education, with the 2013 book, When the Emperor Was Divine. Left: A discussion of The Grapes of Wrath during 2009 Orientation Week

When thousands of new students converge on campus in August, they’ll chat about choosing a major, taking the swim test, surviving the coming winter—and reading Slaughterhouse-Five. When it comes to selecting the book, Brown says she accepts nominations from ‘everybody and anybody’ including current students, faculty, staff, and RAs.

Since 2001, the University has aimed to create a sense of community among incoming freshmen and transfers through the shared experience of reading the same book. Dubbed the New Student Reading Project, it consists of lectures and discussions as well as special events like campus art exhibits and writing workshops connected to the book’s themes.

Over the years, selections have included history (Lincoln at Gettysburg), classics (The Great Gatsby, Frankenstein, Grapes of Wrath), sociology (Guns, Germs and Steel, which launched the project), even popular sci-fi (Do Androids Dream of Electric Sheep?, the basis for the film Blade Runner). “Students come to Cornell excited to be at such an academically diverse school, but it can be hard for them to experience that diversity because they quickly get to their department, major, or college and stay there,” says Laura Brown, vice provost for undergraduate education, who oversees the effort. “The project’s main intention is to get students feeling like there are intellectual or academic reasons why they’re all at Cornell, not just at seven separate independent undergraduate colleges.”

When it comes to selecting the book, Brown says she accepts nominations from “everybody and anybody” including current students, faculty, staff, and RAs. The suggestions are narrowed down to a list of finalists, with the winner chosen by a committee comprising faculty, staff, and the University librarian. This year’s selection, Slaughterhouse-Five by Kurt Vonnegut ’44, marks the first time the book was authored by a Cornellian. 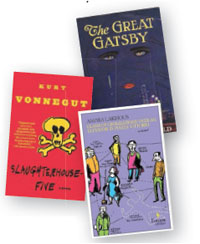 Though some students may groan at the idea of an extra reading assignment, Brown says that many have reported positive experiences. Last year’s title—Clash of Civilizations Over an Elevator in Piazza Vittorio, an Italian whodunit by Algerian-born writer Amara Lakhous—proved so popular that the author was invited to campus. “He was so excited to hear what American undergraduates thought of the book,” Brown recalls. “It was very cool to see the author interacting with stu-dents—to see the com-monalities of what they thought the book was about, but also the ways in which they didn’t agree.”

This year marks a shift in how the project is organized, due in part to a new academic calendar with a shortened orientation week. While in the past each incoming student was mailed a copy of the selected novel at the beginning of the summer—with discussions held during orientation—this year they’ll receive it when they get to campus, and discussions will take place early in the semester. As in past years, the book will also be read by the broader community: the selection is often assigned to classes at Ithaca High School, it’s read by local book clubs, and the Tompkins County Public Library stocks multiple copies.