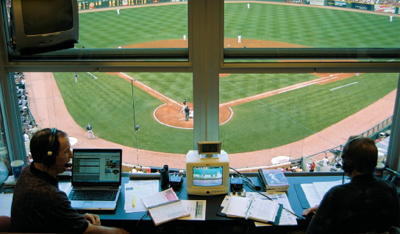 Jack Corrigan '74 is the voice of the Colorado Rockies

High above home plate, in the visitors' radio booth at San Diego's Petco Park, Colorado Rockies announcer Jack Corrigan '74 is surrounded by the tools of his trade: binoculars, a laptop for electronic scorekeeping, a tiny television monitor, Padres and Rockies media guides and stat sheets, and a booklet of sponsor ads to be woven into the evening's narrative. Corrigan's announcing partner of six seasons, Jeff Kingery, sits to his right. The engineer/producer mans a soundboard atop a platform behind them.

It's all one needs to do the announcer's job—that, and an endless supply of baseball stories. There was that time in Detroit when a foul ball knocked Corrigan's sound engineer unconscious. And that run at the end of the 2007 season, when Colorado won twenty-one of twenty-two games to reach the World Series—"the most unbelievable time I've been through in sports," says Corrigan, who wears a National League championship ring on his right hand and a worn Cornell cap on his head.

At the moment, doing a pre-game interview with a Denver radio station, Corrigan is telling a tale about Mickey Mantle shuffling up to the plate with a hangover and hitting a pinch-hit home run against Corrigan's beloved Cleveland Indians in the early Sixties. Back then, Cleveland's futility represented an opportunity for young Jack Corrigan. He and a neighbor would lug a tape recorder to cavernous Municipal Stadium, sit in an empty section of the upper deck, and practice their play-by-play. "I've wanted to do this since I was ten," he says in a strong, radio-perfect voice. "I was the kid who would turn down the sound on the TV and pretend I was the announcer, until my brothers and sisters would throw pillows at me and tell me to shut up." Some two decades later, in 1985, Corrigan was back in Municipal Stadium, only then he was beginning a seventeen-year stint as the Indians' television announcer.

A wide receiver on the Big Red football team, Corrigan tried out for a couple of professional squads before pursuing a graduate degree at Kent State, where he focused on broadcasting. He wrote his master's thesis on NFL Films, the production company that changed the way people watch pro football, showing how a game can become a drama through the use of narrative. Corrigan began his broadcasting career in Youngstown, Ohio, and then moved on to Richmond, Virginia, before making his way back to Cleveland. Over the years, he broadcast everything from college basketball and minor league baseball to pro soccer and even table tennis. "As you develop, you start to get a style," he says. "That's what I tell aspiring broadcasters—you have to find your voice."

Corrigan's seventeen seasons in Cleveland represented the longest tenure of any broadcaster in Indians history, but when the team moved to a new network in 2002 he found himself looking for a job. He took a year off and began writing his first novel, Warning Track, a self-published tale of a star outfielder's foray into the use of illegal supplements. Corrigan, who was a history major on the Hill, is currently finishing his second book, a fictional account of the sinking of the S.S. Leopoldville on Christmas Eve in 1944. (His father was among the rescuers; at least 750 American soldiers perished.)

When Corrigan was hired by the Rockies in 2003, he moved from TV to radio—where the ability to "inform, entertain, and support" (as he puts it) is fueled by the descriptive abilities of the announcer. "On the radio," he says, "you are the analyst, the producer-director, and the play-by-play guy." Corrigan—who has only about eighteen days off during the six-month regular season—tries to have fun in the booth. He'll throw in pop culture references, shout his signature home run call ("It's touch-'em-all time!"), and fill gaps when necessary—as in mid-April, when the Padres and Rockies played a twenty-two-inning marathon that lasted six hours and sixteen minutes. "You have to like the person you're sitting next to," says Corrigan, nodding to Kingery, "just due to the sheer amount of time you're spending together."

But Corrigan is well aware that he is the storyteller, not the story. He remembers a piece of advice he got from legendary Detroit Tigers baseball announcer Ernie Harwell during his first year on the air. "He told me, 'You know you're doing a good job if at least a half-dozen times in the course of a game, the fans can hear the hotdog vendor.' Every once in a while, it's okay to shut up." 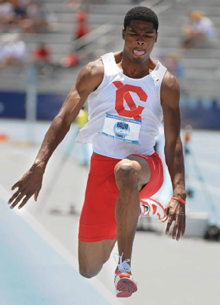 After going more than 50 years without an NCAA individual track and field title, Cornell has produced national champions in back-to-back seasons—in the same event. Muhammad Halim '08 closed out his intercollegiate career by winning the 2008 NCAA title in the triple jump with a school record of 54 feet, 8 inches (wind-aided). Halim, a four-time All-American, bested a field that featured three former NCAA champions including Rayon Taylor '07. Taylor won the national triple-jump title last year as a member of the Big Red but represented Florida State this season, as the Ivy League allows only undergraduates to compete on its teams.

THRICE AS NICE Three was Cornell's magic number at the Intercollegiate Rowing Association National Championships in Camden, New Jersey. Three Big Red boats earned national titles at the regatta, including the lightweight varsity-eight boat, which became the first lightweight crew to win three straight IRA titles. The win also gave the Big Red eight its second sweep of the Eastern Sprints and IRAs in three seasons. The men's varsity pair also took top honors, winning both its heat and the final by more than 4 seconds each. The third title came in the men's masters eight where the Big Red beat Brown by 3.5 seconds. 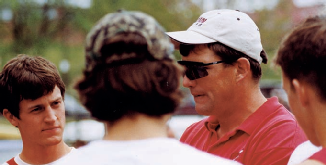 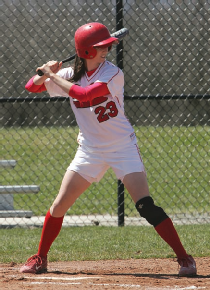 BASHERS Cornell's softball team hit the ball better than any other squad this spring, as their .351 team average not only set a school record but was tops in the nation. The Big Red also ranked in the top ten nationally in scoring, slugging percentage, doubles per game, and win-loss percentage. Jenna Campagnolo '08 led the team with a .423 average, ranking 21st nationally. She was also the sixth most difficult hitter to strike out, fanning only six times in 156 at bats. The Big Red was 40-10 for the season and finished second in the Ivy League south division at 16-4.

BEIJING BOATERS The U.S. Olympic Team included a pair of Cornell rowers: Jen Kaido '03 was a member of three previous U.S. National Teams and finished second in the quadruple sculls at the 2008 Rowing World Cup in Lucerne, Switzerland. Team-mate Ken Jurkowski '03 qualified in single sculls after winning a regatta in Poland.

NEAR MISSES Cornell's waterborne contingent at the Olympics almost had some company on dry land, as several Big Red track and field athletes came up just short in their qualifying bids. Morgan Uceny '07 came the closest, finishing fourth in the 1,500 meters at the U.S. Olympic Trials, one spot short of qualifying for the Games. Uceny also finished sixth in the 800 meters and was the only woman to run in both the 800 and 1,500 meters at the Trials. Other top Cornell performers included Muhammad Halim '08 (10th in the triple jump), Jeomi Maduka '09 (12th in the long jump), and Max King '02 (16th in the 3,000-meter steeplechase). The Canadian Olympic Trials also had a Big Red hue: Adam Seabrook '08 finished fifth in the 400-meter hurdles, Amber McGown '05 placed sixth in the 1,500 meters, and Cody Boyd '11 was eighth in the 400 meters.

HALL OF FAMERS Five All-Americans and an Olympic medalist will be among those honored when the Cornell Hall of Fame enshrines its Class of 2008 in November. John Nunn '64 is the medal winner, having earned a bronze at the 1968 Mexico City games in the double sculls. The All-Americans are John Griffin '79, lacrosse; Cari Hills '98, lacrosse and field hockey; Glen Mueller '72, MBA '74, lacrosse; Mike Raich '88, football; and Kate Walker '97, track and field. Joining them will be Jen Daly '97, soccer; Rick Fricke '67, JD '70, lightweight football and lacrosse; Don Jean '72, MBA '73, football; Mary LaMacchia Zimmerman '96, basketball; and Art Wolcott '49, special category. Wolcott, a life member of the University Council, is a longtime supporter of Cornell Athletics.

DEADEYE Hoopster Ryan Wittman '10 was named one of the nation's top ten shooters by ESPN basketball analyst Fran Fraschilla. Wittman led the Ivy League in three-pointers his first two seasons, hitting 44 percent of his shots from beyond the arc. He is also an 88 percent career free-throw shooter.

FRONT OFFICE Former All-American Joe Nieuwendyk '88 hung up his skates during the 2006-07 NHL season, but he's not done with the game. A three-time Stanley Cup winner, Nieuwendyk is now a special assistant to Cliff Fletcher, general manager of the Toronto Maple Leafs. A native of Whitby, Ontario, Nieuwendyk spent one season with the Leafs near the end of his 21-year NHL career, during which he collected 1,126 points and 564 goals.