As one of the few African American women on campus, Jessie Fauset 1905 encountered hardship—and friendship

Jessie Fauset was born in 1882 in Philadelphia, the youngest of seven children. Her father was an A.M.E. minister, and both parents valued education highly. She attended the Philadelphia High School for Girls, a public school. Separate education for black students had ended in Philadelphia in 1881; Fauset commented some years later, "I happened to be the only colored girl in my classes at high school, and I'll never forget the agony I endured on entrance day when the white girls, with whom I had played and studied through the graded schools, refused to acknowledge my greeting." She achieved high academic marks, however, and her father was invited to offer the graduation invocation. 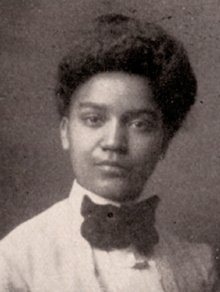 Fauset's academic achievement implied that she was eligible to receive the Bryn Mawr College scholarship, something any white student with the same standing would have been offered. As yet, no African American had matriculated at Bryn Mawr, and the school's president, Cornell alumna M. Carey Thomas 1876, intended to keep it that way because Bryn Mawr attracted a large number of students, not to mention financial support, from the South. Thomas's solution was to send Fauset to Cornell. She solicited half the tuition from a friend and provided the rest herself. Cornell, she believed, was a place where Fauset would be comfortable—an interesting assumption on Thomas's part. Thomas wrote, "I feel, of course, pledged to help raise the money for Miss Fawcett's [sic] tuition fees." Fauset pursued her studies at Cornell with diligence, though Thomas—who had taken equivalency exams and had graduated in two years—mused in 1904 that "it seems to be taking her a long time to get her degree."

Seeking experience as a teacher, Fauset spoke with Professor Walter Willcox, a nationally known economist and statistician at Cornell, who wrote on her behalf to W. E. B. Du Bois. In 1903 Fauset herself wrote to Du Bois, asking if he might suggest a way for her to teach school during the summer. She suggested that if she told him something of herself it might make his task easier, and her letter provides a valuable look at what Cornell was like for her:

This is my Junior year at Cornell. My work thus far has been chiefly classical, though I have of course done a good deal of English and this year am taking American History. I have had German, French, and Psychology—of course I am by no means prepared to teach this last. I would rather teach Latin and rudimentary English—I mean actual English Grammar— than anything else. I was especially [eager] to teach this summer because it is the last before I graduate, and I should like to have some experience before going to work for good. I should have no difficulty, my professors kindly tell me, in securing necessary recommendations. I want to work in the South—I know only one class of my people well, and I want to become acquainted with the rest.

Jessie Fauset thanked Du Bois for whatever aid he could offer and for his book, The Souls of Black Folk. "I am glad, glad you wrote it—we have needed someone to voice the intricacies of the blind maze of thought and action along which the modern, educated colored man or woman struggles." Then she observed, "It hurt you to write that book, didn't it?"

Fauset's own experience as an undergraduate was not without pain. In a memoir, Charlotte Crawford 1906 wrote that she had not been "particularly drawn" to Jessie, but that several other classmates, including her sister, had been close to her. Crawford wrote, "No one made any strenuous opposition to Jessie's admittance to Sage. A strong phalanx of girls surrounded her, ate with her, walked with her to classes, and shielded her in every way." Fauset apparently made close friends and had reason to treasure her time in Ithaca, since some women in Sage understood her unique position and did their best to cosset her, even if others kept their distance. But the statement also suggests opposition to Fauset's presence, if thoughtful friends needed to shield her from overt prejudice. And if there was hostility—as there proved to be in the future—might we not admire those young white women who befriended and protected their black classmate? Crawford names her older sister, Mollie (Mary Crawford 1904, MD 1907, who later became a Cornell trustee), as one of those concerned women who was Fauset's friend, and her younger sister, Lucy Crawford 1913, PhD 1923, acted in a similar fashion "on behalf of another Negro girl a few years later."

They could not, however, entirely protect their black friend. Charlotte Crawford recalled the day she visited Professor George Bristol in his office, finding him "pale and much moved." He said to her, "I have just done a very terrible thing," and indicated that she should look out the window to the Arts Quad. There she saw Jessie Fauset standing under a tree, sobbing. Bristol explained, "I have strongly advised that poor child to drop classics and study something else." He continued: "But what could I do? What possible use can she have for the classics in the life ahead of her?"

Thus the dilemma of the faculty: encourage talented students to follow their hearts and gifts and then face a world unready to acknowledge a classically trained African American woman or a young Jewish man passionate to become a professor of English? Or speak of the world as it is, full of prejudice against the unfamiliar? Jessie Fauset was not the only student advised to follow a prudent course; even so, it was advice hard to hear. From the evidence provided by Charlotte Crawford, it was also painful to give.

Fauset graduated Phi Beta Kappa in 1905. A year later, she wrote to Du Bois that she had been at Fisk University— "your own Alma Mater is it not?"—for "five happy, interesting, new weeks, getting acquainted, getting experience and growing." She taught English, which she had enjoyed. It was her "first attempt," she wrote, "at being useful. . . . That is a wonderful feeling is it not?" Although she admitted that she had been frightened at the prospect of teaching, "the pupils looked at it in a different light, and saw only the college-trained teacher who was offering her wares for the asking."

At the end of the letter, she commented on "Credo," an essay by Du Bois. She asked if he did not believe it "worthwhile to teach our colored men and women race pride, self-pride, self-sufficiency (the right kind), and the necessity of living our lives as nearly as possible, absolutely, instead of comparing them always with white standards." Shouldn't we set criteria, she asked, not because they are white but because they are the best? Her goal was to encourage self-dependence and self-respect. She noted that she had lived "nearly all my life in a distinctly white neighborhood, and for the past four years as the only colored girl in a college community of over 3,000 students, I have had to let people know that we too possess some of the best, or else allow my own personality to be submerged."

Reprinted by permission of the publisher, Cornell University Library. Excerpted from Part & Apart: The Black Experience at Cornell, 1865-1945. © 2009 by Carol Kammen.