Jenn Grauer '04 makes her mark in sound and images

Jenn Grauer '04 makes her mark in sound and images

As a songwriter, Jenn Grauer '04 likes to ask questions. "Won't you come back, honey?" she implores a departed lover in "Stay," the first song on her self-produced debut album, A Million Fires. "Can you hear me singing my melody, anyone?" she queries in "The Gathering." 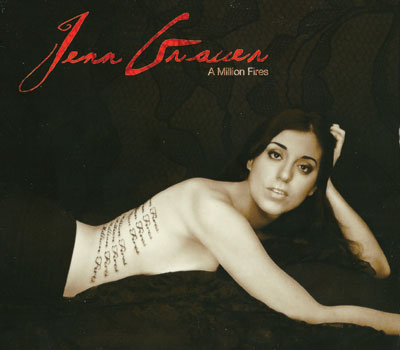 At Cornell, Grauer majored in French and also pursued visual studies, which she describes as "a wee small concentration at the time, but something I was really drawn to." She was also making music. Classically trained on the piano, she had become friends with three musicians—Chris Merkley '01, Kevin Denton '01, MRP '04, and Nyles Fitzgerald '02—who became her bandmates in a group called the Crooners. "I fell in love with the blues—Robert Johnson and Bessie Smith and Memphis Minnie," says Grauer. "I spent a lot of time in the Lincoln Hall library, listening to that music. I also started taking blues piano lessons from this great musician who went to Cornell, A. J. Strauss '97. That was a turning point for me musically."

During breaks, the Crooners traveled to Europe and played on the streets. After graduation, Grauer returned to Paris with the band and did more busking—and then decided it was time for a change. She settled in New York City and began writing the songs that became A Million Fires while temping at HBO. Before long, she was hired to work full-time in the branding and marketing group, where she got on-the-job training in video production.

Grauer is now a writer/producer in HBO's creative services group, where she makes promos for the network's shows and films. Her work has included campaigns for "Real Time with Bill Maher" and "Lady Gaga Presents the Monster Ball Tour," and her composition "Soldier Song" was featured in a promo for the film Taking Chance. Souzan Alavi, Grauer's frequent creative partner at HBO, helped her to produce a music video for the title song of her album, which is featured at Grauer's website (www.jenn grauer.com). "It's been an amazing and dynamic environment to work in and explore my interest in the visual arts," says Grauer.

A Million Fires was released last year. It's brief—seven songs—and features sparse instrumentation: just Grauer's piano accompanied by cellist Rubin Kodheli (who co-produced) and drummer Andrew Borger. The focus is on the songs, which reflect Grauer's affection for blues masters like Bessie Smith and Nina Simone as well as such contemporary songwriters as Fiona Apple and Amy Mann. Grauer held a release show at Joe's Pub in the East Village last fall and has continued to perform live whenever she gets the chance. She's also working on new material, saying that even though her job is demanding, it leaves time in the evening for practicing and writing "until the neighbors knock on my door."

Grauer is also thinking about social media and the opportunities it offers for promoting her music. "How do you tell the story of these songs in a way that's accessible to posting on different social media platforms?" she asks—one more question for a career that seems to be finding some answers along the way.