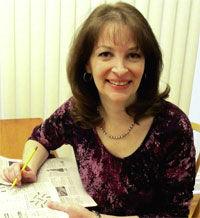 lue: "An activity one chooses to consume one's free time; five letters, begins with 'H.' " Robyn Lipsky Weintraub began constructing crossword puzzles in 2010, and her "hobby" has since become a part-time career. The Westchester County resident has been published in the New York Times and the Los Angeles Times—gigs that are long on prestige but notoriously short on compensation ($200 and $85, respectively). But she stresses that it's not about the money. "It's about the geek glory of being published in the Times," she says. "That's a select little group in the world."

Weintraub also customizes puzzles for occasions like birthdays and retirement parties, including a Cornell-themed crossword she made for the 40th Reunion of the Class of '71. She notes that these days, with a little help from the Internet, anyone can produce a crossword—but that has only raised the bar in the industry. "Now it's much more about coming up with interesting clues or fitting as many Js, Qs, and Xs into a puzzle as possible," she explains.

Weintraub worked in corporate communication after graduation, but has been a full-time mom for the past twelve years; she and her husband, Jeff Weintraub '91, MD '95, have two children. In 2011, she attended her first American Crossword Puzzle Tournament, hosted by America's premier puzzling guru, New York Times editor Will Shortz. "It was fabulous to be in a room filled with that kind of brain power," she recalls. "All these wordy, nerdy people all over the place."

Put to Good Use

One day while leaving work, Eli Reich discovered that his messenger bag was missing. Instead of buying a replacement, he decided to make one from old bicycle tire inner tubes he had lying around his apartment. "It was a good example of 'necessity is the mother of invention, ' " he says. "I thought it would be fun and ironic to make a bike bag out of old bike parts."

The experience prompted Reich to found Alchemy Goods, a Seattle-based business that makes bags and accessories from discarded items like tire tubes and old seat belts. In addition to messenger bags and backpacks (priced from $98 to $168), Alchemy Goods sells handbags and accessories like wallets, belts, card cases, bottle openers, toiletry cases, and laptop covers. Its products are carried by more than 300 retailers nationwide including Whole Foods, REI, and Eastern Mountain Sports.

The company garners much of its raw material through an "upcycling" program in which customers send in their old inner tubes; as of early 2012, more than 182,000 tubes had been recycled. Each finished product bears a small number that represents the percentage, by weight, of discarded material that went into it. "We're hoping," Reich says, "that people start to think a little bit more about where the materials come from in the products they buy."