Judy Mozersky ’92 was nineteen when a stroke left her “locked in,” mentally clear but unable to move. That was nineteen years ago. In a follow-up to his CAM story from 1999, Brad Herzog explores how the former dancer has carved out an independent life in her native Canada, communicating through eye movements and, with the help of aides, pursuing such passions as cooking and corresponding the old-fashioned way— with paper and ink. 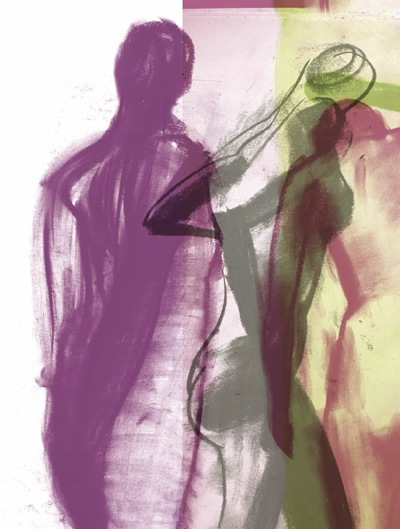 Judy Mozersky was a dancer.

This was in her youth, before her body stopped cooperating with her mind. She studied jazz, modern, and especially ballet, practicing for hours on end. She would start each training session with the five basic positions and then ease into balletic movements—pirouettes and pas de bourrées, arabesque and attitude—that could have served as metaphors for the way she glided through life. It was all about balance and control. She was grace and elegance and energy, a French-speaking, porcelain-skinned ballerina.

For much of her first nineteen years, Judy Mozersky '92 was a dancer. For the past nineteen, she has been 'locked in'— her intact mind trapped in an immobile body.At Cornell, where she followed in the footsteps of her father (Ken Mozersky, PhD '70), her mother (Anne Linowitz Mozersky '65), her grandparents, and several aunts and uncles, hers was the quintessential student experience. She studied psychology, dated a football player, joined a sorority. Active—that may be the best word to describe her. But that was half a lifetime ago, before the moment when all the activity came to an end.

Judy had decided to spend the summer before her junior year in Ithaca, instead of returning to her native Ottawa. On June 14, 1990, she was in her apartment, mentally preparing herself for an afternoon statistics exam. She had just stepped out of the shower. The phone rang. "I'll get it," she said, and then she felt something burst in her head. Dizzy and disoriented, she shouted for help from her roommate. Then the left side of her body went numb. At Gannett Health Center, the doctor told her she was "much too young" to have suffered a stroke. It must be something else. But the symptoms persisted. So she was transferred to Tompkins Community Hospital, where the neurologist suggested it was probably just a bad migraine. But then the night came, and the symptoms accelerated, and all became hazy until Judy awakened to find her parents by her bedside. She could neither move nor speak.

A few days later, a diagnosis: Judy had suffered a stroke affecting the brain stem, the bridge between the brain and the spinal cord, almost completely blocking the nerve-fiber pathways that normally connect the motor-executive areas in the higher brain (the cerebrum) with the nerve-cell centers in the brain stem and spinal cord, which control the body's muscular movements. Her mind was unscathed, but she lost the capacity to direct any movements of her body other than the muscles governing her eyes, throat, and respiration. She could feel everything; she could move almost nothing. Given the physical incarceration of such a condition, Fred Plum, MD '47, former chairman of the Department of Neurology and Neuroscience at Cornell Medical College, coined a term for it in the Sixties: Locked-In Syndrome.

The dance that was Judy Mozersky's life had come to a dramatic halt, as if the stage lights had gone dark. First Position? In dance practice, it was basic: heels touching, feet facing outward. Now it was something even more fundamental.

Dance is a song of the body. Either of joy or pain.
— Martha Graham

Most of the victims of locked-in syndrome are far older than Judy was, and it has been estimated that only 10 percent of them survive the first four months. So in those early, excruciating days, the goals were to keep Judy alive and remind everyone at Ottawa General Hospital that beneath that expressionless face was a vibrant, terrified, completely alert young woman. Judy was attached to a nasogastric tube, a tracheostomy tube, a urinary catheter, a respirator, a heart monitor. Unable to call for help for hours at a time in the dark of night, she was unimaginably miserable. Her parents? They endured because they had no choice. As Anne puts it, "Faced with a catastrophe, you either cope or die."

In the span of hours, at the age of nineteen, a cerebrovascular fluke had taken away motion, communication, the very things that seemed to define her. But it turns out maybe that wasn't the essence of Judy Mozersky after all. Strip away the physicality of dance, and what do you have? Nonverbal communication. A creative outlet for social interaction. A means of telling a story and expressing passion, pathos, humor. All of that is still part of Judy's life. The body may be unwilling, but the mind isn't. Or, to put it another way, the dancing stopped, but the music didn't.