M.H. Abrams—a lion of literary studies, founding editor of The Norton Anthology of English Literature, teacher of novelist Thomas Pynchon ’59 and literary critic Harold Bloom ’51, professor at Cornell for seventy years—died in Ithaca on April 21. Abrams, who passed away at the remarkable age of 102, was active until the last months of his life. Last summer he traveled to the White House, where President Barack Obama awarded him the National Humanities Medal for his contributions to literature. The eminent critic Wayne C. Booth has called him “the best historian of ideas, as ideas relate to literature and literary criticism, that the world has ever known.” 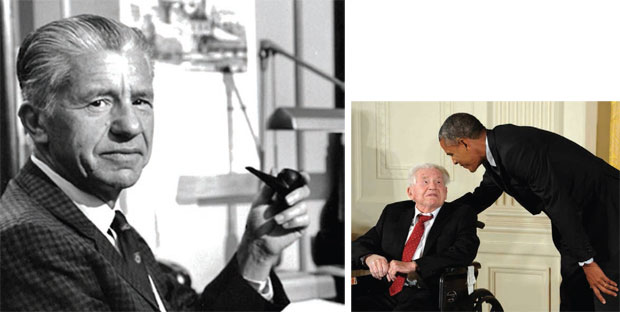 Meyer Howard Abrams—”Mike” to his friends—came to Cornell in 1945 and never left. His seminal work, The Mirror and the Lamp: Romantic Theory and the Critical Tradition, an extension of his Harvard PhD thesis, was published in 1953. Abrams argued that until the Romantics, literature served as a mirror held up to the world. But the Romantics—particularly Wordsworth and Coleridge—perceived, interpreted, and illuminated the world. The writer became the beacon, the lamp—roughly the way the Renaissance shifted us, in broad terms, from a God-centric to a human-centric world. “We are human, and nothing is more interesting to us than humanity,” Abrams said in 1999. “The appeal of literature is that it is so thoroughly a human thing—by, for, and about human beings.”

Bloom called The Mirror and the Lamp “a remarkable piece of critical and literary history” that “remains a perpetually useful book”—in other words, a classic. The Modern Library put it twenty-fifth on its list of the 100 most important nonfiction books of the twentieth century.

But Abrams is perhaps best known as founding editor of the Norton Anthology, which sold 8 million copies through the seven editions he oversaw. He began the project in the late Fifties, hiring six scholars to cover six genres. He expected it to take a year; it took four. No one anticipated that the anthology would be such a monumental success, spawning spin-offs devoted to American literature, fiction, Shakespeare, and more. And while the series has been attacked for some perceived faults—too narrow, too broad, too expensive, too heavy, too exclusive, too inclusive—it has endured, as a 2006 New York Times essay noted, “due in large part to the talents of Abrams, who refined the art of stuffing thirteen centuries of literature into 6,000-odd pages of wispy cigarette paper.”

Beyond the work, of course, was the man.

Abrams was born in Long Beach, New Jersey, in 1912, the son of a house painter who later owned a paint and wallpaper store. The first in his family to go to college, he earned his undergraduate and grad degrees from Harvard. During World War II he worked in that university’s psychoacoustics lab, where he tackled problems of military communications. He helped develop nomenclature for letters of the alphabet—”Able, Baker, Charlie, Dog”—that, for example, allowed pilots to hear radio instructions over the noise of engines and gunfire.

Biking to campus well into his nineties, the compactly built Abrams was genial, gentle, and witty. He and his wife, Ruth, were married for seventy-one years until her death in 2008; they had two daughters. And he was a devoted fan of Big Red football—so much so that, as legend has it, he never missed a single home game.

Not one? In seven decades? The attraction, he once explained, was “the snappy fall air and the excitement of the game—and the good fellowship.”