New York State Governor David Paterson has said that in a global innovation economy today's ideas are tomorrow's jobs, and he recently took a significant step toward better aligning the state's primary idea generators—its colleges and universities—with the corporate sector. In establishing the Task Force on Diversifying the New York State Economy Through Industry-Higher Education Partnerships, Governor Paterson has set in motion a strategy that will help to create an environment that attracts new businesses, grows existing businesses, incubates emerging businesses, and promotes sustainable economic development.

I am honored to serve as its chair, because I believe that New York's economic development is of utmost concern to Cornell—as the state's land grant university, a recipient of generous state support, and a major research university. Cornell has a formal mandate and a strong institutional commitment to use its knowledge for the benefit of all New Yorkers, and there is no better place to focus our efforts than on creating a more secure and sustainable economic future. 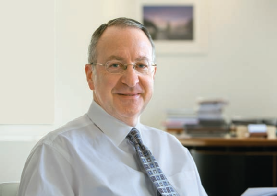 Furthermore, real economic progress, as opposed to incremental change, will be strongly facilitated by more robust collaboration between higher education and the business community. Cornell has had considerable experience with such collaborations, but we stand to gain enormously from new approaches and fresh ideas.

In selecting the task force's members, Governor Paterson chose talented, experienced people from diverse backgrounds— including Shirley Ann Jackson, an elementary particle physicist, president of Rensselaer Polytechnic Institute, and a member of President Obama's Council of Advisors on Science and Technology; Dr. David Smith '76, a fellow of the American Academy of Pediatrics and president of SUNY Upstate Medical University; Wendell Weeks, chairman and chief executive officer of Corning Inc., who also serves on the boards of Merck & Company Inc. and his undergraduate alma mater, Lehigh University; Sanjoy Banerjee, CUNY Distinguished Professor of Chemical Engineering and director of the newly formed CUNY Energy Institute at City College; and John Dyson '65, chair of Millbrook Capital Management Inc., who has spent much of his career in public service within New York State and is a Cornell trustee emeritus and presidential councillor. Daniel Doktori, the governor's director of higher education, will serve as executive director. It is a true privilege to be working with them and the other distinguished members of the task force, all of whom are committed to putting our state on sounder economic footing by fostering increased collaboration among New York's public and private institutions of higher education, its research laboratories, and the corporate sector.

For nearly a century New York's economy has been centered on Wall Street, but the current financial crisis has highlighted the need for greater diversification. We need to build on the synergies that exist between higher education and industry to generate new jobs and economic opportunities through sustainable development and growth. We should aim, for example, to position New York as a leader in the green economy. We have the opportunity to bring new knowledge to bear on the agricultural sector, including the New York State wine industry, and to capitalize on the growing interest in local, sustainably produced foods. We must find ways to accelerate the translation of basic research into new products and processes that add value to the economy. We need to identify opportunities for private and public investment that will incubate new enterprises, especially in energy generation and storage, biotechnology, nanotechnology, animal and human health, and other areas where New York already has competitive advantages and significant strengths. And we need to determine what changes are needed in the regulatory environment to foster collaboration among industry, higher education, and research laboratories.

Between now and December 15, when the task force will submit its recommendations, we will be analyzing New York's economic strengths and competitive advantages and assessing ongoing academic-corporate collaborations through the Centers of Excellence, Centers for Advanced Technology, and other programs. We will also be looking nationally and internationally for other models of collaboration and "best practices" that might be applicable within New York State. And—not least—we will seek to accomplish our goals in ways that do not require significant new investment from the state.

As the task force proceeds with its work, I hope you will share examples of higher education-industry collaboration that have been successful in your state or region. Thinking our way out of the current economic dilemma is both a challenge and the extraordinary opportunity of our time, and I value your interest and ideas.