On January 1, 2012, Peter Meinig '61 will complete twenty years as a Cornell trustee, including his extraordinary leadership and service as the Board's chair since July 2002. We will then welcome a distinguished new leader, Robert Harrison '76, as chair. I'll have more on that transition—and on Pete Meinig's remarkable legacy—in a future issue.

The transition to new Board leadership and the recently completed election for alumni-elected trustees provide an occasion to reflect more broadly on the role that Cornell alumni have played in governing our university. Time and again, over a span of 137 years, they have stepped up to the challenge—not for financial gain or personal glory, but out of deep love for the institution and the desire to guide it to an even better future.

A year after the University's founding, President Andrew Dickson White noted in his "Plan of Organization" that when the alumni body reached a sufficient number it should annually choose a representative to serve on the Board of Trustees. That "sufficient number" became available six years later, in 1872, and provision was made for the "Associate Alumni" to elect a trustee—making Cornell one of the very first American universities to have alumni representation on its governing board. 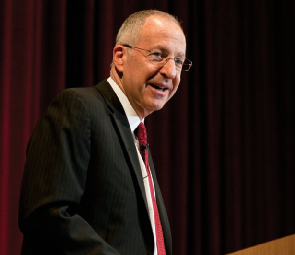 The first alumni-elected trustee was Samuel Halliday of the Class of 1870, elected in 1874, and Cornell alumni have had substantial responsibility for the governance of the University ever since.

This year's alumni trustee election gave us the youngest and most geographically diverse candidates for alumni-elected trustees in Cornell's history. Mitchell Lee '90, JD '96, Rana Glasgal '87, ME '92, Gregory Galvin, PhD '84, and Eva Sage-Gavin '80 exemplify the range of backgrounds and diversity of leadership roles that our alumni are willing to assume in their regions, for their classes, for their colleges, and for the University as a whole. The election stimulated the highest voter turnout ever, and I have no doubt that the newly elected trustees, Glasgal and Galvin, will carry forward the tradition of exemplary alumni leadership in the governance of the University throughout their terms.

The current Board of Trustees comprises sixty-four voting members: some are appointed by the governor with confirmation by the State Senate; some, including the governor and state legislative leaders, are ex-officio; one is the eldest lineal descendant of Ezra Cornell; but the vast majority—fifty-six trustees— may be "selected in such manner and for such terms as the Board of Trustees may determine" as long as those selected include at least two members each from the fields of agriculture, business, and labor in New York State; two faculty-elected trustees; two student-elected trustees; one employee-elected (i.e., non-faculty staff) trustee; and eight trustees elected by the alumni body as a whole. In practice, most of the other board-elected trustees are also alumni.

Trustees have fiduciary responsibility in overseeing the University's programs and assets, are charged with selecting its president, and give the final approval of tenure decisions and of faculty elected to named chairs, among other responsibilities. Our trustees also represent a wealth of talent and expertise that has been especially important in these difficult economic times. In general, the old maxim of "Noses in, fingers out" aptly describes the Board's responsibility to provide high-level oversight rather than day-to-day decision making. However, in the face of the unprecedented financial challenges that Cornell faced during the Great Recession, I greatly appreciated the experience and expertise in fiscal management that many of our trustees possess. At the administration's request, the Board formed task forces to participate as teams with senior administrators to formulate responses to the challenges of the recession, and I believe that our current position of relative financial strength is due, to a substantial degree, to the teamwork between the administration and the trustees.

All of us on Cornell's campuses—faculty, staff, and students—should be grateful for the devotion, expertise, and deep commitment of our Board of Trustees, and for the alumni leadership it represents. As we welcome new alumni-elected trustees to the Board for terms that begin on July 1 and prepare for the transition in leadership next January, I invite all alumni to share in Cornell's governance by continuing to vote for alumni-elected trustees and by participating in activities that provide pathways to alumni leadership posts.