Living in the southern Texas city of Brownsville, the daughters of Jerry and Selena Cortinas—eight-year-old Dion and three-year-old Ally—had never seen snow. In fact, the holiday season had long been a bittersweet time for the family. In December 2002, Jerry almost died in Afghanistan. A Green Beret, he lost a hand and forearm—and was unconscious for twenty-six days—after a grenade launcher exploded. With no wintry weather and limited funds, a Brownsville Christmas wasn't quite festive enough to overcome the traumatic memories.

Then Andre Carrier '92 started a nonprofit called Christmas Can Cure. In 2008, the Cortinas clan was one of two families, identified through the Wounded Warrior Project, flown to the White Mountains of New Hampshire for an idyllic New England Christmas—a four-day getaway featuring everything from a sleigh ride to a snowball fight to a pajama-clad journey aboard the Polar Express. The trip, says Selena, created "good memories that we can associate with December." 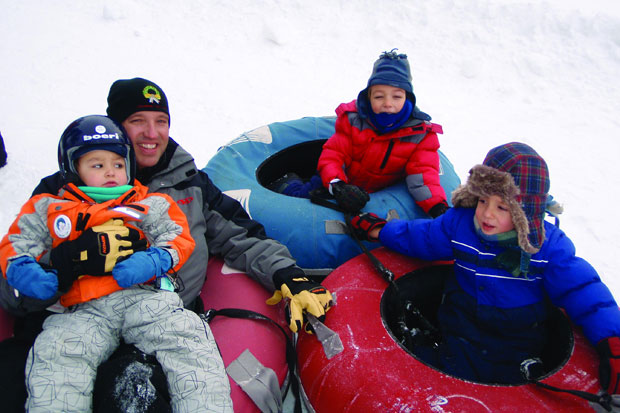 In the Decembers since, Mother Nature has (usually) furnished the snow, while the Carriers and their New Hampshire neighbors continue to provide the memories for two families each year. (Since 2009, a second branch of the program has brought two families to Park City, Utah, annually.) The beneficiaries have included retired Army Specialist Eddie Platt, who lost a leg after his truck was hit by a rocket-propelled grenade in Iraq, and former Navy Lt. Commander John Oliveira, who spent years unable to leave his home due to post-traumatic stress disorder. Army Cavalry Scout Bradley Chidester, who was attacked by a suicide bomber in Mosul and suffered shrapnel wounds to his arms and chest, suffers the daily physical and psychological effects of his injuries. But he describes his 2009 Christmas Can Cure experience as "a catalyst for change in my family."

Christmas Can Cure began when Carrier decided it would be nice to share the holiday that has long brought his large family together at his parents' vacation home in Jackson, New Hampshire. He describes the typical Carrier Christmas as a "Currier and Ives experience," the kind you see in movies. But with five siblings and myriad nieces, nephews, in-laws, and cousins, the family's gift lists were beginning to overwhelm. So Carrier, a Hotel grad who serves as COO of Eureka Casinos in Nevada, made them an offer. "I suggested we should just take all that money, put it in a pot, and do something better with it," he recalls. Carrier knew his family would support a veterans' cause: two of his cousins served in Iraq and Afghanistan, his wife's father was a lieutenant colonel and Army Ranger in Vietnam, and his godfather was a World War II veteran.

A couple of years ago, the proj­ect's beneficence went beyond a holiday getaway; it threw a wedding. On Veterans Day Weekend 2010, twenty-one-year-old Army medic Kevin Hardin—who endured nearly three dozen surgeries after his Humvee was hit by a rocket-propelled grenade in Iraq in 2007—married his former nonmedical caregiver at the Eureka Casino Resort in Nevada. The resort paid for the wedding as well as travel costs for the immediate family and wedding party. Local businesses provided everything from flowers to photography, Sheraton donated a Hawaiian honeymoon, and the bride was featured on TLC's "Say Yes to the Dress." (Sadly, Hardin died just fourteen months later, likely from a seizure due to shrapnel in his brain.)

Each Christmas Can Cure celebration is held the weekend before the actual holiday; Carrier figures that the families should be home on December 25. The festivities include a party in the barn at the Christmas Farm Inn (where Santa makes an appearance and hands out presents), a stop at Santa's Village amusement park, snowmobile excursions, even adaptive skiing or snowboarding opportunities. And every year, Carrier's parents keep their Christmas tree bare until the military families arrive. While the kids spend an evening making ornaments and decorating the tree, Mom and Dad enjoy a night out.

Although the Carriers serve as de facto hosts, the nonprofit succeeds largely through the benevolence of the residents and business owners of the Mount Washington Valley, who donate everything from lodging to entertainment. Carrier's biggest challenge, in fact, is coordinating the many offers from local business owners who want to show their gratitude to veterans and their families. These include a Christmas shopping extravaganza along Main Street, where nearly every store offers gift cards. "Everybody makes it a priority," says Carrier. "There are so many people who want to do something—especially when you give them the opportunity to tithe not just with just dollars, but with time."