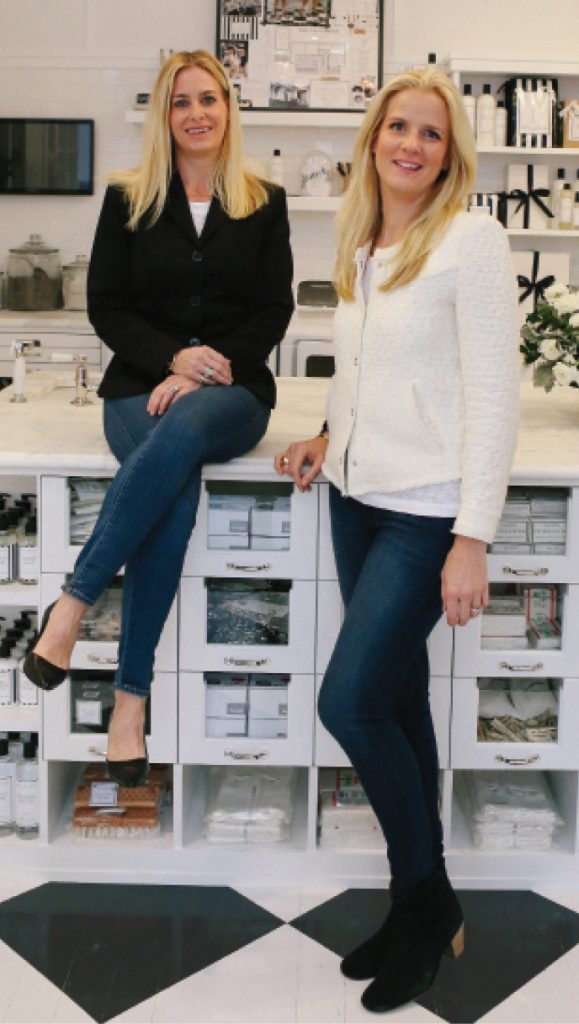 Gwen Whiting ’98 and Lindsey Boyd ’98 landed dream jobs in fashion in their twenties, with Whiting designing for Ralph Lauren and Boyd in corporate sales for Chanel. Along the way, each acquired plenty of pricey garments—which also meant costly dry cleaning bills. On top of the expense, they weren’t thrilled about the chemicals used in dry cleaning, or the fact that their clothing occasionally came back ruined. As graduates of Human Ecology’s Department of Fiber Science and Apparel Design, they knew that most fabrics—even cashmere and silk—could actually be washed, but they weren’t satisfied with the detergents that were available. “We were either spending a fortune on dry cleaning or hand washing clothes with baby shampoo in a fifth-floor-walkup sink,” says Whiting. “It was frustrating.”

The two solved their dilemma in 2004 by co-founding the Laundress, an upscale, eco-friendly line of detergent, fabric care, and home cleaning products. Rather than developing an all-purpose laundry soap, Whiting and Boyd created a range of nontoxic, allergen-free formulas that target specific fabrics—such as wool, denim, or the nylon and spandex used in exercise gear—to fight dirt and stains while protecting color and texture. Their products are now sold by more than 1,500 retailers worldwide, including the Container Store and Bloomingdale’s, as well at the company’s flagship shop in Manhattan’s SoHo neighborhood and two overseas, in Tokyo and Seoul. Their products are also available on the company’s website, which features how-to videos and instructions, with advice on everything from getting out pizza stains to the proper way to wash a cashmere sweater. “Seeing is believing,” says Whiting. “We want to show that [laundering] is easy and not this daunting thing.”

One morning late last February, Whiting and Boyd sat down to chat with CAM at their pristine Midtown Manhattan offices. The black-and-white décor—including bright white floors and workstations—mimics the company’s chic, minimalist packaging, which is more in line with a luxury beauty or skin care brand than typical cleaning products. Their downtown shop, too, looks like an upscale boutique, with built-in shelving, a crystal chandelier, and black-and-white checkered floors; employees are trained to give guidance on washing techniques, and there’s a tiny laundry area—complete with compact washer and dryer—that can be used for demonstrations. “It’s a place to touch and feel and smell all of our products,” says Boyd, who compares shopping there to “how you can get Chanel at Neiman Marcus but going to the Chanel store on Madison Avenue is a completely different experience.” 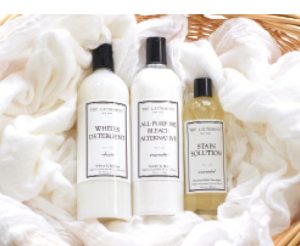 A sampling of Laundress products.Provided

Like Chanel, the Laundress’s products aren’t cheap. The company’s signature detergent is more expensive than most other natural or supermarket brands, with a thirty-two-ounce bottle costing $20.50. Yet Whiting and Boyd point out that the formula is highly concentrated, so that bottle cleans sixty-four washloads—which tops the cleaning power of ninety-five ounces of Seventh Generation’s Ultra Power Plus detergent, for instance, which costs around $13.

Plus, they argue that their anti-fade solutions, which are offered in fragrances like jasmine and sandalwood, can help save money in the long run by extending the life of one’s wardrobe. “Gwen and I have things we bought twenty years ago and they look brand new,” says Boyd. Adds Whiting: “People can see the difference. Their clothes look better, smell better, and last longer.”

The two admit that when they launched the Laundress, their parents questioned their decision to leave flourishing fashion careers to start a cleaning product business. They loved their jobs, they explain, but felt there was little room for advancement—and they’d wanted to build a company together since their undergrad days. After coming up with the Laundress idea, they reached out to fiber science professor S. Kay Obendorf, PhD ’76, an innovator in using science to improve laundering. “I had a really positive reaction to their concept and its uniqueness,” says Obendorf, now a professor emerita. She gave Whiting and Boyd a crash course in detergent science in Ithaca over a summer weekend in 2002, and she continued to give tips over the next two years as they perfected their formulas. Her lab even tested some methods to remove yellowing from white knit garments, which they incorporated into their stain solution.

Unlike many entrepreneurs, Whiting and Boyd haven’t sought funding for their business from outside investors. They launched the Laundress with credit cards and a Small Business Association loan—“We bootstrapped it from day one,” says Whiting—and have kept it privately owned. Convincing stores to carry their line was challenging at first, but doors opened once Bergdorf Goodman signed on. Now, Boyd says, “a lot of people who first said no to us are some of our best clients.” They’ve also earned well-known admirers, including supermodel Heidi Klum, movie star Drew Barrymore, and director Sofia Coppola. Musician John Mayer was such a fan, he and the Laundress teamed up in 2016 to develop two products—a specially scented detergent and a fabric freshener—that benefit land preservation programs in Montana, where Mayer owns a home. “John is a secret textile nerd,” says Whiting, “which is why he found and contacted us.”

Moving forward, she and Boyd hope to grow an already strong business in Asia, and plan to continue to expand into accessories like laundry bags, hampers, and storage boxes. Boyd says the ultimate goal of the Laundress has always been to create “a start-to-finish laundry experience” that makes a domestic chore more enjoyable. “Everyone has a need for something that we make, whether it’s for a stain or just doing a load of laundry,” says Whiting. “We’re fixing a problem for them, and that makes people happy.”