Among the many things that make serving Cornell such a joy is the enormous support—unrivaled in my thirty years' experience in higher education—that Cornellians offer. Those of you engaged with the University devote thousands of hours each year to advisory councils, boards, alumni mentoring, admissions interviews, guest lectures on and off campus, reunions, class and club programs, and myriad other volunteer activities. And Cornell alumni, parents, and friends have been remarkably generous with financial support, even in these difficult financial times. Of the top 400 charitable causes compiled yearly by the Chronicle of Philanthropy, Cornell consistently ranks in the top 10 percent, and in the most recent tally—based on fiscal year 2009 data—we ranked twenty-seventh overall and third among higher education institutions. 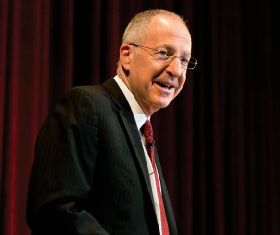 In a period of uncertainty and austerity, and with so many opportunities to help lift the world's burdens or improve lives in a tangible way through philanthropy, why do so many people—including Cornellians—choose to support higher education?

Certainly, many alumni feel great pride in their alma mater, and their desire to preserve and promote its distinction is a worthy reason for philanthropy. Alumni pride, expressed through philanthropy, has strengthened Cornell in countless ways. Another reason, in my view, is that contributions to higher education represent faith in the future: a belief that we have advanced as a civilization through the discovery, acquisition, dissemination, and application of knowledge, and that we need to pass on that opportunity to succeeding generations. At a time when nearly half of all Americans polled in a recent telephone survey feared that the nation's best days are behind us, investment in higher education is a singularly optimistic act.

Thanks to the leadership of our trustees, overseers, and many other alumni, parents, and friends, Cornell ended the 2010 fiscal year with new gifts and commitments up 77 percent over the recession-driven declines of the previous year, for a total of $466 million. Last year, in fact, Cornell had the top results in the Ivy League for new gifts and commitments. Last year, too, the Cornell Annual Fund recorded its eighth consecutive year of growth, up 12 percent, with $27.3 million given by more than 32,000 donors. And while large, transformational gifts make news and are deeply appreciated, all gifts—regardless of size—matter.

As we announced at an alumni event in Boston last November, Cornell recently reached the $3 billion mark in the $4 billion Far Above campaign, launched in 2006. Very few universities have ever raised that amount in a campaign. This support is a testament to the loyalty and commitment of those engaged with Cornell.

Much more important than the sheer size of the monetary contribution to higher education is what the generosity makes possible. Private philanthropy is a critical piece of the funding mix at most colleges and universities. At Cornell, for example, in FY 2010, payout from the endowment accounted for 10 percent of our $3 billion operating budget. This included a $35 million endowment payout for financial aid, which helps us ensure that academically talented undergraduates from families of limited means will not incur a crushing burden of debt. In addition, gifts to be used in the current year accounted for an additional 5 percent of the operating budget. In sum, nearly one dollar in six contributing to Cornell's operation comes from philanthropy.

Equally important, philanthropy provides the edge for excellence at even our best universities. At Cornell, our greatly enhanced need-based student financial aid, the new faculty renewal initiative, the many professorships that will follow, and funding for critical, carefully selected capital projects all depend on robust fundraising, combined with our continued progress toward a balanced budget that includes judicious growth.

I am grateful for the many ways—financial and otherwise— so many of you have chosen to support Cornell. I do not take your phenomenal generosity for granted. I invite you to continue your involvement in the years ahead to ensure that our university realizes the aspiration we set for ourselves in the strategic plan: to be widely recognized as a top-ten research university in the world, and a model university for the interweaving of liberal education and fundamental knowledge with practical education and impact on societal and world problems. That is the promise and the opportunity of our Cornell.