As epidemiologist Maria DeJoseph Van Kerkhove ’99 fielded questions from a group of international journalists on March 16, 2020, the outbreak of the novel coronavirus was intensifying around the globe—and people were starting to panic. So when a Rwandan reporter asked Van Kerkhove—who helps lead the World Health Organization’s pandemic response team as the head of its emerging diseases unit—if wearing gloves could prevent the spread of the disease, she adopted a calming demeanor and sought to allay fears with facts. “Being scared is normal,” she said in the briefing, which has since been viewed more than 450,000 times on YouTube. “What we need to do is channel that energy into something positive and making sure that you know what you can do to protect yourselves.” Van Kerkhove went on to offer advice that would be repeated over and over again in the coming months: basic hygiene is one of the most effective ways to prevent COVID-19. “Every single person that washes their hands,” she said, “is protecting themselves and is protecting others.” 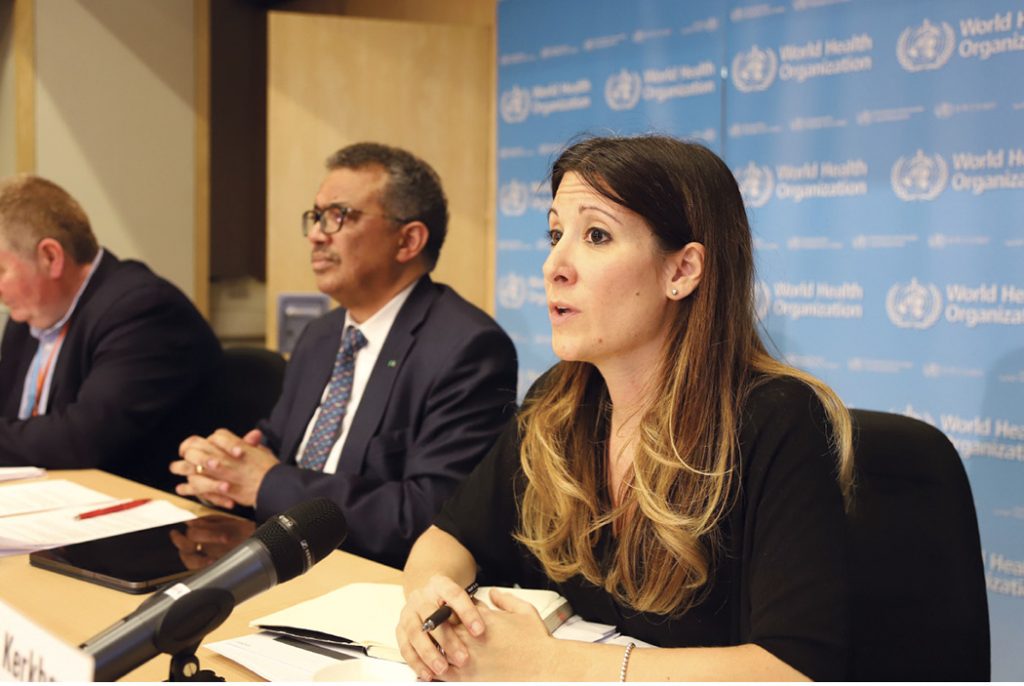 Van Kerkhove in Geneva, Switzerland, at one of the WHO’s daily briefings on the emerging COVID-19 pandemic in early March 2020Chen Junxia/Xinhua/Alamy

In the midst of an unprecedented pandemic that has killed millions and infected tens of millions more, Van Kerkhove has become a very public face of the WHO—a specialized agency of the United Nations based in Geneva, Switzerland, that addresses issues affecting international public health. It’s a highly visible role that Van Kerkhove never expected to have: she’d previously worked behind the scenes at the WHO, at the Institut Pasteur’s Center for Global Health, and elsewhere studying infectious diseases like Ebola, avian influenza, and MERS (a disease caused by another type of coronavirus). Since her first-ever briefing on January 14, 2020—“I thought that would be my only one,” she recalls—she has become well known to those who tune in to the WHO’s near-daily virtual press conferences, during which she regularly explains complicated scientific information in lay terms.

Part of Van Kerkhove’s job is to keep up with the reams of COVID-19 research and other evidence coming in daily from physicians and scientists all over the world, which helps the WHO advise governments in their response strategies and formulate recommendations for the public on mask-wearing, mass gatherings, and more. She was on the ground in China in the pandemic’s early days—studying the virus in Wuhan, where it first emerged as a cluster of mysterious pneumonia cases with no known cause. Van Kerkhove also visited hospitals, clinics, community centers, and other facilities throughout China as part of a team of experts seeking insight into that nation’s prevention and control measures so the WHO could better counsel the international community on strategies to blunt the disease’s spread. As Rebecca Katz, director of Georgetown University’s Center for Global Health Science and Security, told the Hill newspaper in April 2020: “Right now, she’s probably one of the three most important people in the world working on this pandemic.”

A CALS alum, Van Kerkhove studied the avian flu in Cambodia for her doctoral dissertation in infectious disease epidemiology from the London School of Hygiene & Tropical Medicine; she also holds a master’s degree in epidemiology from Stanford. As she notes, it can often be hard for the general public to understand that as scientific knowledge evolves, organizations like the WHO sometimes have to adjust their guidance. “Communicating uncertainty is really difficult,” she says, speaking to CAM in February, as the vaccine rollout ramped up in the U.S. (and before severe outbreaks struck India, Brazil, and other developing countries). “Sometimes we have to explain that we don’t have a complete picture yet on some of these topics, but we’re working with really dedicated people from around the world to get those answers.”

Explaining the ever-expanding body of COVID information can be fraught: a comment Van Kerkhove made during a press briefing last June sparked a firestorm when, in response to a question about asymptomatic transmission, she said that “it still seems to be rare” that people who don’t develop symptoms pass on the virus to others. She’d been specifically referring to the findings of a very small set of studies—but taken out of context, some viewers interpreted her remark to mean that people who have the virus but aren’t sick don’t fuel its spread. Though Van Kerkhove quickly clarified her statement in an online Q&A the following day—and had been emphasizing the risks of asymptomatic transmission for months—she was savaged on social media and in the press. Some used her comment to argue that the public doesn’t need to wear masks, maintain social distancing, or take other precautions; others lambasted her on Twitter, accusing her of being a danger to public health. Van Kerkhove remains deeply affected by the incident; not only were the individual attacks tough to bear, she says, she always strives to be precise in her messaging because she knows that world leaders look to the WHO for reliable advice. “What I said was immediately politicized,” she laments. “I tried to nuance my answer really carefully. To this day, it’s still misrepresented.” 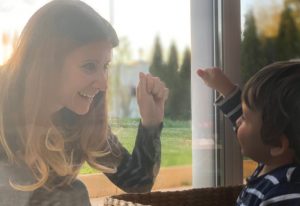 In the pandemic’s early days, Van Kerkhove physically isolated herself from her children and husband to help keep them safe. Provided

For Van Kerkhove, like so many others, the pandemic and its stresses have also taken a personal toll. During its first six months she worked brutally long hours, seven days a week—leaving home before her two young children were awake and coming home after they were asleep. During the two-week trip to China, where she visited facilities where infected patients were being isolated and treated, her ten-year-old son was terrified that she would contract the virus and die. And as cases began to spike in Switzerland, Van Kerkhove and her husband, Neil Van Kerkhove ’99 (whom she met when both were freshmen on the Hill), decided that since she was spending so much time in the office, it was best to be extra cautious and have her self-isolate from the rest of the family, an arrangement that lasted for two months. “It’s been the most difficult year of my life, as I think most people could say,” she says. “I’ve been challenged in ways I didn’t know I could be challenged.”

Van Kerkhove grew up in an Upstate New York town an hour east of Syracuse; she remembers first reading about epidemiology in The Hot Zone, Richard Preston’s nonfiction bestseller about the Ebola virus, while in high school. “I was always interested in diseases,” she recalls, “and why some people get sick and others don’t.” As an undergrad, she spent summers working in the lab of biochemist Eloy Rodriguez (now a professor emeritus of plant pathology and plant-microbe biology), helping with projects that sent her on research trips to Mexico, Costa Rica, and Venezuela to study the medicinal properties of plants. Later as she pursued her PhD, she spent time in Cambodia to better understand how the H5N1 virus—or bird flu—was circulating through the live poultry trade there and evaluating the risks that it would be transmitted to humans.

She then served as a senior research fellow in the MRC Centre for Outbreak Analysis and Modelling (as it was then known) at London’s Imperial College; she was also a liaison between that group and the WHO, which tapped her expertise for its response to influenza, Middle East respiratory syndrome (MERS), yellow fever, Ebola, and other emerging diseases. Before joining the WHO full time in 2017, she spent two years heading the Institut Pasteur’s outbreak investigation task force. Still, she says, nothing quite prepared her for COVID-19. “We’re trained to think about these types of things,” she observes, “but I don’t think anyone could have anticipated that this would unfold as it has.”

Yet throughout the pandemic, Van Kerkhove has witnessed many inspirational moments. She marvels at how the WHO has marshaled thousands of experts around the world—from South Africa to South Korea—who are helping fight the virus by testing and caring for patients, improving prevention, and raising awareness. She’s in awe of the scientific community, which swiftly produced diagnostic tools and life-saving vaccines. And despite increasing concerns about the evolution of virus variants, Van Kerkhove now sees brighter days ahead. “Unfortunately, I think the tunnel is long and dangerous—but there is light at the end of the tunnel,” she says. “And a combination of public health measures and vaccination will help us get there.”

2 thoughts on “Following the Science”