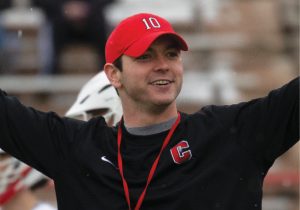 Connor Buczek ’15, MBA ’17, was playing for Atlas in the pro Premier Lacrosse League last summer when he separated his right shoulder while trying to strip the ball from an opponent. He retreated to the sidelines with his arm dangling and, with help from training staff, popped the shoulder back in. Moments later he returned to the field, firing a shot from fifty feet out for a two-point goal to put Atlas back in the game.

A standout during undergrad, Buczek—just twenty-six—has been named head coach of Big Red men’s lacrosse for the 2021 season. In addition to playing professionally, for the past three years he has been an assistant coach for the Big Red squad that was second in the rankings in 2020, finishing the COVID-shortened season 5-0. He earned all-star honors in three of his four pro seasons with the Florida Launch in Major League Lacrosse before moving to Premier, where he set the league’s single-game scoring record. Additionally, he helped Team USA to third place at the 2019 World Indoor Lacrosse Championship.

But such accomplishments seemed unlikely during Buczek’s freshman season. An attackman in high school in Cincinnati, he moved to midfielder for the Big Red and played in only five games. “That was the first time in my life I really struggled,” Buczek recalls. “But the support system here is so strong that I was able to grow and eventually succeed. I owe much of who I am to the lessons I learned and the relationships I established.”

Jordan Stevens ’15 has been by Buczek’s side since they were freshmen, first as his teammate and now his assistant coach. “He came in with high expectations, but he wasn’t able to contribute the way he wanted to,” Stevens recalls. “However, I think that experience made him tougher, and his hard work and resilience embodied what it means to be a Cornell lacrosse player.” Buczek turned things around his sophomore season, notching thirty-five goals and eighteen assists and helping the Big Red to the national semifinals. He earned first-team All-American honors as a junior and senior, graduating as the program’s leader in points by a midfielder. He also excelled off the field, earning a Senior CLASS Award, which honors top NCAA scholar-athletes. 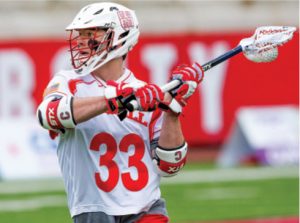 After earning his bachelor’s in applied economics and management, Buczek matriculated at the Johnson School; while pursuing his MBA, he volunteered as an assistant coach for the Big Red and played professionally over the summer. When a full-time assistant position opened, he chose it over offers from Wall Street. “Coaching is such an unpredictable business that it was a hard decision, but I couldn’t pass up an opportunity to coach lacrosse at Cornell,” says Buczek, who is unsure whether he will continue his pro career. “I’ve gotten so much from the sport and the school, I felt the need to make sure future players enjoy it as much as I did.”

When Buczek was offered the chance to move up to head coach, he jumped at it. (His appointment is only for 2021 and a national search is planned, though he’s expected to be a leading candidate.) And while he may not be a typical Johnson School grad, the degree has already served him well. “The MBA program is far more than financial models, securities, and derivatives,” he says. “It’s really about being an effective teammate and leader. You learn about finding creative solutions, solving problems, and debating options—all of which transfer to coaching.”