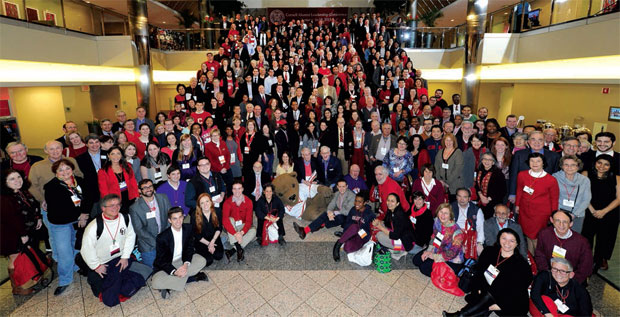 For the third year in a row, hundreds of alumni volunteer leaders from around the world converged on Boston for the annual Cornell Alumni Leadership Conference (CALC), which was held January 16–18. With a weekend full of panels, discussions, and receptions, alumni leaders were able to take home great ideas and hone their leadership skills with fellow Cornellians.

Class officers, regional club leaders, Cornell Alumni Admissions Ambassador Network (CAAAN) volunteers, and Greek alumni leaders took advantage of sessions that strengthened their skills and shared best practices. Class officers took part in a “Shark Tank” session, where five classes presented their ideas for events, with the audience voting that the Class of 2014 had the best proposal (for a Slope Day event in New York City). Regional and international club leaders discussed their plans for Charter Day in a special session, while CAAAN volunteers took on the role of admissions officers by seeing what it’s like to read applications and determine the strength of candidates. Sessions also focused on general volunteer topics, including understanding the work of a Cornell trustee, how alumni leaders can participate in the upcoming Giving Day (see sidebar), and dealing with leader­ship succession.

Friday’s luncheon featured government professors Isaac Kramnick and Glenn Altschuler, PhD ’76, each talking about an interesting piece of Big Red lore they learned from writing their book, Cornell: A History, 1940–2015. Kramnick discussed the University’s impact on women’s rights issues—did you know the term “sexual harassment” was coined at Cornell?—while Altschuler discussed the kerfuffle that occurred when Taiwanese President Lee Teng-hui, PhD ’68, spoke on campus in June 1995.

President David Skorton was the luncheon keynote speaker on Saturday, delivering a farewell talk before he moves on to become secretary of the Smithsonian Institution in July. Skorton spoke about his experiences as president and his love of working with alumni. As the luncheon came to a close the Glee Club serenaded him with “Give My Regards to David.”

Attendees were also invited to take part in the Boston leg of Cornell’s Sesquicentennial celebration, gathering at the Wang Center for a performance of “The Big Idea.” It was hosted by NPR reporter David Folkenflik ’91, trustee emeritus and presidential councilor Myra Hart ’62, and Shane Dunn ’07, president of the Cornell Club of Boston.

Two awards were presented during the weekend. Stan Rodwin ’50 won the William “Bill” Vanneman ’31 Outstanding Class Leader Award, while the Class of 1995 was recognized with the CAA Cup, which is given to the outstanding alumni program of the year as voted on by CALC attendees. CAAAN and the Cornell Black Alumni Association were finalists.

The weekend was capped off with a Sunday morning breakfast presentation by Joe De Sena ’90, co-founder and CEO of Spartan Races, who talked about his unusual road to Cornell and the creation of his company. One piece of advice he gave was to out-work everyone around you. For Cornell alumni volunteers, that’s never been a problem.

‘Nothing Short of Amazing’ 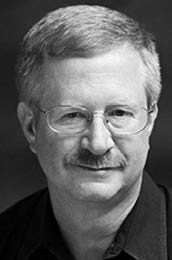 It seems on­ly yesterday that I got a call from Pete Meinig ’61, BME 62, then chairman of the Board of Trust­ees, and wondered, “Why on earth is the chair­­man of the board calling me?” And already, my term is nearing its completion. What an eventful four years it has been. Bob Harrison ’76 followed Pete as chairman. Cornell won the New York tech campus competition. David Skorton announced he was moving on to the Smithsonian. We elected a new president, Beth Garrett. We dedicated Gates Hall. We started construction of Klarman Hall—and that small project on Roosevelt Island. And we launched a world-wide Sesquicentennial anniversary celebration.

In response to a question during the Alumni Trustee election process, I provided the following priorities should I be elected: faculty renewal, resource allocation, and marketing the University.

Faculty renewal is ongoing and will be for many years to come. It is a priority across campus. It has the full support of the board, and substantial funding has been raised through the current campaign. In addition to renewal of faculty in the traditional sense, the University has rightly begun to broaden the concept of faculty. This is most evident at Cornell Tech, where a significant percentage of the faculty will not be tenure track.

Resource allocation continues to be a challenge. The University has weathered the economic travails of 2008–09, but still runs with really no margin for error on the financial side. We can and should be proud of Cornell’s commitment to need-blind admission. Our admission statistics are outstanding by all measures, yet we continue to struggle to find sufficient funding for student aid.

The tech campus competition once and for all forced Cornell out of its happy isolation in Upstate New York. Not only did the world come to know Cornell, we came to learn things about ourselves that surprised many of us. Cornellians do amazing things. They lead major corporations and start new businesses at rates on par with, or in excess of, most of our peers. Through the engagement of many tens of thousands of alumni during the competition, a greatly enhanced image of Cornell and its place in the world has emerged.

The experience of being an alumni-elected trustee has been nothing short of amazing. It has been a great honor to work with our administration and fellow board members and to represent our incredible alumni. 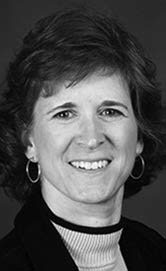 I am frequently asked about the experience of being a mem­ber of the Board of Trustees, and the questions differ accord­ing to who is asking—students, fellow alumni, or my colleagues in university management. Some questions are basic, some are bolder and more pointed, but over the past four years I have never tired of answering them because it is part of the honor of serving as an alumni-elected trustee.

My term started on a jubilant but somewhat awkward note as Cornell won the competition to build a unique campus in New York City—edging out Stanford University, my employer. Board matters were ever-fascinating and stimulating from there forward: online education, financial stresses, hazing, alumni involvement, and faculty renewal were just some of the challenges. I hope that my perspective as someone who works in the day-to-day setting of a university has been helpful to my fellow board members and my alma mater, and I am grateful for what this experience has brought to me professionally.

I said in my election platform: “As Cornell heads into its Sesquicentennial, it is guided by a thoughtful and ambitious strategic plan; the Board of Trustees will support this plan through a shared vision, expert guidance, collegiality, and leadership.” Although I said this before serving on the board, I found it to be true in practice. I thank my fellow board members for being welcoming, hardworking, dedicated, and thoroughly interesting people. I’m also grateful to former alumni-elected trustee Liz Altman ’88 (my trustee mentor), the deans and administrators who lead Cornell with such passion, the many students who have amazed me with their intelligence and talents, and of course my husband, Bruce, for his support. Finally, I thank all the alumni who elected me to this position.

It’s been an honor to serve the University at this rewarding and meaningful level. Happy 150th, Cornell!

What difference can a day make? We’re about to find out. Cornell’s first-ever, University-wide giving day will take place on Wednesday, March 25. The goal: to rally as many alumni, parents, faculty, students, and staff as possible to create the single biggest day of giving in Cornell history—and, in turn, create a wave of support that will benefit programs across the University.

Donors will be able to direct their gifts on that day to any funds they choose; however, the focus of the event will be to raise funds for each of Cornell’s colleges and major units. They will compete against each other to raise the most dollars and engage the highest percentage of participants. Challenge funds—in which donors pledge to match gifts to encourage others to participate—will ensure that on Giving Day, each donor’s gift is able to do more for Cornell than it would on any other day in the year.

The twenty-four-hour online giving sprint will commence at midnight Eastern Standard Time. Throughout the day, donors can watch the Web and social media for live progress updates and other fun ways to be part of the festivities. “Cornellians are proud of the ways the University has made a difference in their lives and in the world,” said Joe Lyons ’98, senior director of the Annual Fund. “When we combine that pride with a little competition, I’m confident that the world will see exactly the kind of difference we can make when our community comes together in a resounding show of support.”

Are you ready to join in? Please make your own gift at givingday.cornell.edu on March 25. And, once you do, help us spread the word to your Cornellian friends around the world.