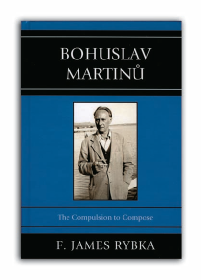 The twentieth century Czech composer Bohuslav Martinu° wrote more than 400 pieces: symphonies, operas, ballets, and many orchestral, chamber, piano, and vocal works. His style evolved from impressionism through experiments with expressionism and constructivism to neoclassicism and often employed jazz idioms.

The abundance of his output caused some critics to question if the music was facile and uneven. Rybka, a retired professor of plastic surgery at UC Davis and family friend of the composer, emphasizes the quality of Martinu°'s work and makes the case that Martinu°'s compulsion to compose was a result of Asperger syndrome.

Julia Child's "The French Chef" by Dana Polan '75 (Duke). Julia Child changed American attitudes toward food and turned a cooking show into popular television. "With 'The French Chef,' entertainment and instructional strategies came together in the force of a dynamic personality who cogently and consistently made cooking fun while never losing sight of the utility of basic instruction," states Polan, a professor of cinema studies at New York University. "The mere functionality of the cooking demonstration is transformed into steps on the path to pleasure. In its own way, 'The French Chef' prepares the way for later, more hedonistic cooking shows."

The Turkey and the Eagle by Caleb Stewart Rossiter '73, PhD '83 (Algora). Benjamin Franklin advocated the industrious wild turkey as the symbol of the United States rather than what he termed the "sharping and robbing" bald eagle, a choice that signified aggression and dominance in foreign policy. One look at the back of the dollar bill shows which symbol won. Rossiter, an associate fellow at the Institute for Policy Studies and assistant professor at American University, reviews the history of U.S. domination and citizens' efforts to control it, from the Spanish-American War to the current war on terrorism.

Rallying for Immigrant Rights edited by Kim Voss, MS '77, and Irene Bloemraad (California). In early 2006, an estimated 3.75 to 5 million people across the U.S. demonstrated for immigrant rights. Although their activism helped defeat the Border Protection, Antiterrorism, and Illegal Immigration Control Act, legislation that would provide a path to legalization for millions of undocumented workers and their families failed to pass. A professor of sociology at UC Berkeley and her colleagues argue that the legacy of the protests is a "call to a new politics of inclusion, one that is being challenged by alternative visions of exclusion and expulsion."

Don't Expect Magic by Kathy McCullough '84 (Delacorte). Fifteen-year-old Delaney Collins's world turns upside down after her mother dies and she leaves her home and friends in New Jersey to live in a California beach town with her emotionally distant father, a famous life coach and self-help guru whom she hasn't seen in four years. One day she stumbles upon his secret: he's a fairy godmother. When she discovers that the fairy godmother gene is hereditary, wise-cracking Delaney isn't prepared for the troubles her newfound powers cause. She learns that magic doesn't always help the person who holds the wand.

Becoming Marie Antoinette by Juliet Grey '81 (Ballantine). The first novel in a trilogy follows the life of Maria Antonia, the young Archduchess of Austria, as she makes the arduous transformation to Marie Antoinette, a suitable wife for Louis, the French Dauphin.

Mariage New-Yorkais by David Grossvogel (l'Éditeur). A professor emeritus of Romance studies and comparative literature tells a satirical tale, in French, about a murder investigation in New York.

In Uncertain Times edited by Melvyn P. Leffler '66 and Jeffrey W. Legro (Cornell). Policymakers from the George H. W. Bush, Clinton, and George W. Bush administrations examine how 9/11 and the fall of the Berlin Wall have affected U.S. foreign policy.

The Deaths of the Author by Jane Gallop '72, PhD '76 (Duke). In close readings of four literary theorists, Gallop, a professor of English and comparative literature at the University of Wisconsin, reconsiders the poststructuralist idea of the "death of the author"—that the author does not matter, only the text—in light of the recent deaths of several theorists.

The Seed by Jon Gordon '93 (Wiley). The business consultant, life coach, and author of The Energy Bus, offers a fable on how to gain perspective and restore purpose and passion in one's life and work.

Evolution of Plant Breeding at Cornell University by Royse P. Murphy and Lee B. Kass, PhD '75 (Internet-First University Press). Murphy, former dean of the faculty and head of plant breeding, and Kass, visiting professor in plant biology, tell the 100-year history of the Department of Plant Breeding. Available online at http://hdl.handle.net/1813/23087.

Inside a U.S. Embassy edited by Shawn Dorman '87 (Foreign Service Books). Foreign Service employees give day-in-the-life accounts of their work in embassies and consulates from Afghanistan to Zimbabwe and answer questions about careers in diplomacy.

Gay Latino Studies edited by Michael Hames-García, PhD '98, and Ernesto Javier Martínez, PhD '05 (Duke). The authors explore the state of gay Latino studies in the U.S. and "highlight relationships among ongoing intellectual projects that take the lives of gay, bisexual, and queer Latino men as a starting point."

Bryophyte Ecology and Climate Change edited by Zoltan Tuba, Nancy G. Slack '52, MS '54, and Lloyd R. Stark (Cambridge). Researchers describe the varied ecosystems where mosses and other bryophytes exist— from peat bogs to deserts to alpine regions—and how these plants are indicators of climate change.

Postcolonial Cinema Studies edited by Sandra Ponzanesi and Marguerite Waller '69 (Routledge). In this collection of essays, a professor of English and women's studies at UC Riverside and her co-authors examine the effects of migration, militarization, economic exploitation, and racial and religious conflict on the work of filmmakers from former European, Soviet, and U.S. colonies.

A Field Guide to Wildflowers of the Sand-hills Region by Bruce A. Sorrie '67 (North Carolina). A botanist for the North Carolina Natural Heritage Program focuses on the unique plant life of the Sandhills region of the Carolinas and Georgia and its dependence on fire ecology.

Come Closer edited by Toby Emert and Ellie Friedland '76 (Peter Lang). Activists, scholars, and theatre professionals describe how they use the lessons of Augusto Boal's Theatre of the Oppressed to create dialogue and democratic change.

Nationalism in Europe and America by Lloyd Kramer, PhD '83 (North Carolina). A professor of history at the University of North Carolina, Chapel Hill, looks at the history of nationalism and the influence of the American and French revolutions.