A look back at some of Ithaca's legendary hangouts

A look back at some of Ithaca's legendary hangouts

This summer, two popular College-town bars, Dino's and Johnny O's, shut their doors for good. Although their stretch of College Avenue has served as the epicenter of Cornell nightlife for the past decade, their empty facades remind us that no watering hole lasts forever. Many of Cornell's legendary bars and restaurants have come and gone, but these historic haunts live on in the memories of generations of Cornellians. 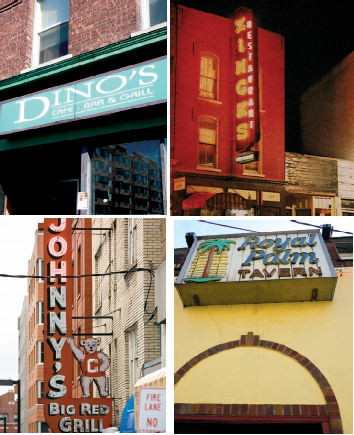 Only one bar is so central to Cornell's history that it merited a mention in the University's unofficial drinking song, "Give My Regards to Davy." Zinck's, founded by German immigrant Theodore Zinck in 1876, drew crowds of thirsty students through the end of the nineteenth century. But in 1903, the iconic bar was touched by tragedy when Zinck's only daughter died of typhoid, and her grief-stricken father drowned himself in Cayuga Lake. Zinck's later re-opened under new management and, after closing during Prohibition, saw renewed popularity in the Forties. As retired CAM editor John Marcham '50 recalls: "It was a great favorite with fraternity boys."

Another much-beloved twentieth-century destination was Johnny's Big Red Grill, a bar and restaurant in business from 1919 to 1981. (It stayed open as a bar until the Nineties, and its iconic sign remained aloft on Dryden Road until 2009.) Novelist Richard Fariña '59 wrote about Johnny's, and famed folkies Harry Chapin '64 and Peter Yarrow '59 played there. Its owners, John and Ruth Petril-lose, founded an Ithaca dining dynasty; their son, Bob, created the ever-popular Hot Truck. "Everybody knew the Big Red Grill," says Cornell archivist emeritus Gould Colman '51, PhD '62. "The Petrillose couple knew all the students, and we would be greeted when we came in."

Across the street, the Royal Palm Tavern—still open, despite recent rumors to the contrary—has served a steady stream of students since the Thirties. Mid-century Cornellians also frequented Wes and Les, a late-night diner by the railroad tracks, and Old Landmark, a popular bar and grill downtown. Later generations trekked to the west side of town for cheeseburgers, fries, and a game of pinball at Bud's Diner, operated by Bud and Amelia Wimer on Old Taughannock Boulevard from 1966 to 1974, and then on Lincoln Street until 1988.

In the Eighties and Nineties, students flocked to Dos Amigos, a Mexican eatery on the Commons that served wings and beer late into the night. ABC Café, another longtime favorite on Stewart Avenue, played host to local bands and open-mike nights while serving coffee and vegetarian fare from 1980 until it closed in 2009. The Connection, a now-defunct bar on College Avenue, was another Eighties-era favorite. "On your birthday you could get a free drink that was equal parts tequila, 151-proof Bacardi, and Tabasco sauce," says Mark Anbinder '89. "You had to pay for the entire pitcher of beer you'd need to wash it down with, though."

While Cornell's gustatory landscape continues to change, some things stay the same. Anbinder notes that his uncle, Stephen Anbinder '59, is a longtime fan of Joe's, an Italian restaurant that has been in business on Meadow Street off and on since the Thirties. "When my uncle came up for Reunion," he recalls, "the first thing he said was, 'We have to go to Joe's, and I have to get spaghetti and meatballs.'"