Worldwide, one in eight people lacks access to safe drinking water. In developing countries, waterborne illnesses such as diarrhea, guinea worm, trachoma, and schistosomiasis fill 50 percent of all hospital beds and lead to 3.5 million deaths annually—including those of 4,000 children every day. Naturally occurring contaminants including arsenic, fluoride, radon, and selenium—as well as scores of industrial chemicals—cause myriad chronic conditions, from bone malformation to diabetes and cancer. Even in the U.S., where indoor plumbing and chlorination are the norm, health-care costs associated with Legionnaire's disease, cryptosporidiosis, and giardiasis—all transmitted in tainted water—total more than $500 million every year.

These are the facts that consumed Cornell trustee Kevin McGovern '70 as he recuperated from hip surgery during the summer of 2006 and pondered his next career move. A co-founder of the nutra­ceutical beverage brand SoBe (now owned by PepsiCo), he had just overseen the sale of KX Industries—the world's largest manufacturer of carbon purification filters for such brands as PUR, Brita, and Electrolux Frigidaire—a company he had co-owned for a decade. In the process, he'd learned a thing or two about H2O. "I decided I wanted to do something that would truly impact the world," says McGovern, a longtime intellectual property lawyer and serial entrepreneur. "The number one health issue in the world is the water we drink." 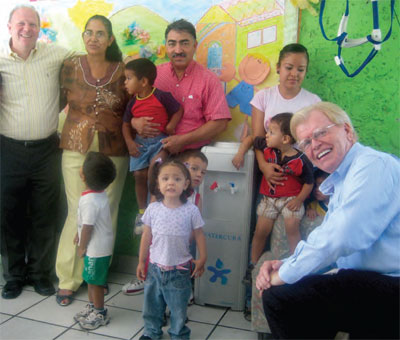 Throughout the U.S. and Europe—and those parts of the developing world with indoor plumbing—water treatment plants filter contaminants from lakes, rivers, and reservoirs, then pipe the clean results into our homes. Such facilities cost billions. Yet less than 2 percent of what's treated is actually used for cooking or drinking; most of it leaks from faulty pipes or flows through household appliances, toilets, and bathtub drains. Even worse, the pipes—some laid during Abraham Lincoln's presidency—from plant to tap are often so compromised that the flow is re-contaminated before it touches our lips.

McGovern, whom the Economist has called "a self-described pro bono capitalist," determined to skip over the treatment plants and blighted infrastructure to focus on what flows from the tap—assembling a team of scientists to develop an affordable, home-scale countertop filtration unit. "Just as the cell phone allowed billions of people to leapfrog telecommunications equipment," says McGovern, Cornell's 2007 Entrepreneur of the Year and a longtime adviser to the University's Center for Sustainable Global Enterprise, "point-of-drinking devices will allow people around the world to leapfrog water treatment plants and bottled water."

By the end of 2006, McGovern had formed The Water Initiative (TWI) with a roster of investors and advisers including Indian industrialist Ratan Tata '59, BArch '62, Middle East financier Lubna Olayan '77, MIT professor Robert Langer '70, and financial services executive Jeffrey Parker '65, MEng '66, PhD '70. "When you invest in early-stage companies, you're investing primarily in the individual," says Parker, Cornell's 2001 Entrepreneur of the Year. "Kevin has an incredible ability to get in the door and have one-on-one meetings with people who are globally significant. If you're doing something as big as providing clean water for billions of people, that's a critical skill."

The company's business model lifts a page from the book of TWI adviser Stuart Hart, the Samuel C. Johnson Chair in Sustainable Global Enterprise and author of Capitalism at the Crossroads: The Unlimited Business Opportunities in Solving the World's Most Difficult Problems. Instead of selling a few high-priced items to the world's wealthiest people, TWI takes a "bottom of the pyramid" approach to turning a profit by marketing to the billions who live in developing countries. Their per capita earnings—and expenditures—are barely a sliver of those boasted by their counterparts in the U.S. and Europe, but collectively they comprise a vast market with powerful economies of scale.

With the blessing of Mexico's first lady and the country's water authority, TWI's scientists started in the central state of Durango, where toxic arsenic levels drive those who can afford it to buy bottled water, while the community's most impoverished citizens endure disability and disease. McGovern charged the team with designing an affordable unit that requires neither batteries nor electricity and can be safely discarded—despite the toxic metals it filters—at the end of its useful life. To test their design, the team chose the town with the highest arsenic concentration; their first-generation filter lasted less than two weeks. Today, the unit, which costs less than $20 annually to operate, can filter 50,000 liters—five years' worth of drinking and cooking water for the average Durango family.

By the end of 2012, TWI will have delivered nearly 100,000 units to the Durango government, which determined it would be cheaper to contract with the company than to build a central water treatment facility. This spring, McGovern traveled to four additional states in Mexico, as well as Chile, Argentina, and Peru to promote TWI's products. His scientists are developing units for a large housing development in Riyadh, Saudi Arabia, and in February McGovern charged his team with launching a unit intended for households in the U.S. Like all of the company's products, it will be customized to local water conditions. "Unlike any other company in the world, we do not walk in with a solution and force it like a silver bullet on the situation," he says. "We diagnose the situation, then develop an appropriate solution."