It's the off-season in Orlando—the early February lull between Christmas vacation and winter break—and the crowds at Gatorland are sparse but enthusiastic. Clad in a safari-style shirt and blue jeans, Adam Hall '09 takes the sand-filled stage of a small amphitheater and asks a boy in the audience to pick a gator. Then he grabs the chosen animal by the tail, drags it center stage, and climbs on its back like a kid on a pony. "Doesn't that look easy?" Hall asks, flexing a muscle body-builder style. "Ladies, get your pictures."

Hall starts with a primer on gator anatomy, showing how the animal's eyes recede into its head at the touch of his fingers and pointing out the location of its ears. Then: "You want to see some crazy stuff? You want to see some action, right?" He polls the crowd as to the most dangerous part of a gator; the vote is roughly split between jaws and tail. "Take a look at the tail, and take a look at me," says Hall, pointedly holding the gator's mouth shut. "You just failed an open book test." The crowd laughs appreciatively. "The tail can bruise you," he goes on, "but if the mouth gets you, it's going to take something and not give it back."

It's just another day at the office for that rarest of species, the Ivy League-educated alligator wrestler. Since September 2010, Hall has been an entertainer at Gatorland, a venerable, family-owned theme park and animal preserve in America's tourist mecca. In addition to caring for the creatures and their habitats, Hall stars in three shows—the wrestling demonstration, the "Upclose Encounters" show in which he handles snakes and spiders, and "Jumparoo," a crowd pleaser that casts him as an overalls-clad yokel who tempts gators to leap out of the water to snatch chicken carcasses. "It's not so much that you fear the animal, it's more about respecting what it could do and handling it in a way that makes the alligator feel comfortable so it doesn't have a reason to try to hurt you," says Hall, who worked at a zoo in Utica, New York, before moving to Florida. "Yes, it's called gator ‘wrestling' but it's not about overpowering the animal, like in high school wrestling where you're trying to pin the other guy. It's about teaching people about the animal in a safe way. You want to show them how cool the alligator is."

Considered a "half-day" attraction—as opposed to the behemoths of Disney, Universal Studios, and Sea World—Gatorland is an Orlando institution; it was founded in 1949, and the giant concrete gator's mouth at its front entrance is a beloved local landmark. Its 110 acres include some 1,500 gators and the odd crocodile, plus one of the largest bird rookeries in central Florida, snack bars that sell local delicacies from gator nuggets to boiled peanuts, the six-story-high "Screamin' Gator Zipline," and a vast, jolly, reptile-themed gift shop that's a destination unto itself.

Hall moved to Orlando with an eye toward someday training Shamu at Sea World, a childhood dream he still nurtures. "I've always been gung-ho for working with animals, whether it be cute, cuddly ones or sharp, scaly ones," says Hall, who earned an associate's degree from Mohawk Valley Community College before matriculating at Cornell, where he majored in animal science and worked in the department's raptor conservation program. At his Gatorland audition—amazingly enough, it was his wife who pointed out the gator-wrestling job and suggested he apply—he performed the Jumparoo script, which dramatizes a gator-feeding competition between a pair of dimwits named Bubba and Cooter. Even though he didn't have any acting experience, he nailed it. "They wanted to see that I was willing to take a risk," he says, "to try something new and not be afraid to look stupid." Then came training and apprenticeship with veteran animal handlers. "You have to pass the gator-wrestling test, which is wrestling twelve alligators in two and a half hours," he says. "Fifteen minutes later, you wrestle the first show of the day. I was a little tired, but I was on an adrenaline high." 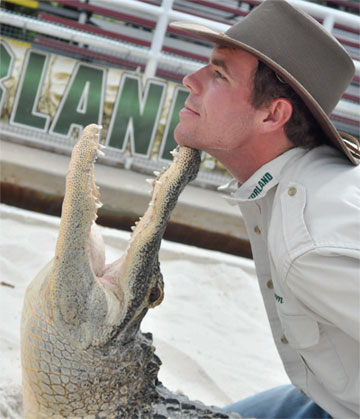 Hall's job requires him to be part teacher, part comedian, part daredevil. Back in the wrestling ring, he's giving a lesson on how a gator's jaws work. "If he doesn't want his mouth open," he tells the crowd, "there's nothing that I or my gigantic muscles can do about it." Still straddling the gator, he strokes its throat and succeeds in prying its jaws open, earning a chorus of oohs and ahs. The animal starts to squirm and wander, but Hall manages to get control and turn it around so the opposite rows of bleachers can get a good look. He describes the flap that seals off the throat when the gator goes underwater and explains that the animal's massive jaw pressure is designed for closing, not opening—which is why he can keep its mouth shut with just one hand. "Watch this," he says, then adds: "Famous last words for a redneck, right?" Hall leans forward and tucks his chin over the gator's snout to keep its mouth closed, stretching his arms behind his back as if to say, "Look, mom, no hands!" The crowd erupts in applause, and he raises the stakes. "Watch the alligator's bottom jaw," he says. "If it goes wrong, watch my bottom jaw." He makes an adjustment, and this time holds just the top jaw with his chin; the bottom one swings opens to reveal rows of pearly whites. The crowd goes wild.

With the show winding down, Hall offers a lesson in escaping a hungry gator. Since the animals can run only ten to twelve miles an hour but can turn on a dime, he says, the old wives' tale about moving in a zigzag pattern is dead wrong. "Just run in a straight line," he says, "or trip the person you're with, and then walk." For his final act, Hall shows that the old saw about putting a gator to sleep by turning it onto its back actually has some merit; he upends the animal with a deft flip and it lies immobile. The show's announcer closes with a lullaby:

Rock-a-bye gator,
asleep in the pit.
The show would be better
if Adam got bit.