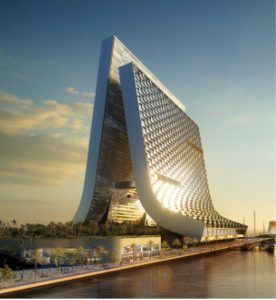 A pair of mixed-use towers in Dubai.

See more pictures of Chad Oppeheim’s work in our September/October print edition. Subscribe before the next issue, and receive your own copy.

When architect Chad Oppenheim ’93, BArch ’94, was a kid growing up in New Jersey, he’d watch “Miami Vice” on Friday nights and be enraptured by the sun-kissed charisma of the seaside city where that Eighties cop show was set. Fast forward a couple of decades, and Oppenheim—who moved to Miami shortly after graduating from Cornell—got the ultimate compliment from the program’s creator, Michael Mann. “When he came here to shoot the Miami Vice movie, he reached out to me and said, ‘I believe your work represents the new architecture of Miami,’ ” Oppenheim recalls. “I was like, ‘Oh my God, are you serious?’ It was amazing.”

And there’s more: not only did the two become friends, but Mann shot part of that 2006 film at the house Oppenheim designed for himself and his family. Dubbed Villa Allegra, the 6,000-square-foot property boasts such unusual features as an oculus, a reflecting pool, and a wide column containing an outdoor shower that’s open to the sky. “An informer was murdered in our house,” Oppenheim recalls with a chuckle. “We were here when they were shooting it; they had some guy ‘fake dead’ on the floor, and Michael Mann was pouring on more and more blood.”

The mood is rarely that dark at a Oppenheim creation. The architect is known for the simple beauty and elegance of his high-end projects, which often use local materials and are intended to meld with the landscape—be it an urban skyscraper, a multi-family residential development, or a vacation home neighboring a sand dune in the Bahamas. As Oppenheim told the Wall Street Journal in a 2015 feature on his family’s ski house in Aspen—which he renovated using reclaimed barn wood and Colorado granite—he aims for his buildings “to blend and disappear like an animal camouflages itself in its environment.” 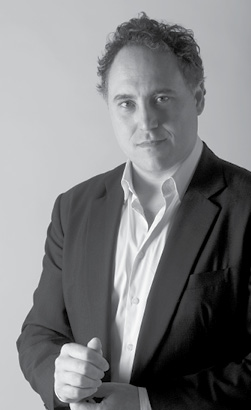 Oppenheim, who opened his Miami-based firm in 1999, caught the architecture bug early: he was in elementary school when his parents decided to leave their subdivision and have a custom home built. He vividly re­calls sitting around the dinner table as the architect they’d hired “conceived these incredible do­me­­s­­tic architectural dreams.” Hooked, he read everything on the subject that he could get his hands on. He was especially wowed by Douglas House, a mountainside home on the Lake Michigan shore designed by Pritzker Prize winner Richard Meier ’56, BArch ’57, with his signature white walls and vast windows. It made Oppenheim determined to “go to Cornell and follow in that guy’s footsteps,” first with an architecture course at Summer College (the University’s academic program for high schoolers) and then for undergrad. He made an impression. “Chad was one of the most hard-working, enthusiastic, curious, and talented students I’ve ever taught,” says Andrea Simitch, BArch ’79, an associate professor of architecture. “He was fantastic—just unstoppable. He lived, ate, and breathed his education.”

Oppenheim worked and studied abroad extensively, with stints in Rome, Spain, Israel, Portugal, and Japan. His practice still has a global focus: in addition to New York and Miami, he has an office in Basel, Switzerland—his wife is Swiss—and he has pursued projects around the globe. They include resorts in Nicaragua and Bali; a dramatically curving pair of mixed-use towers in Dubai; and the new Toy Story-themed hotel at Shanghai Disneyland. Among his more striking and unusual designs is a luxury eco lodge in Wadi Rum, Jordan—as yet unrealized, due in part to the unstable political situation—to be hewn into the desert stone, offering a modern take on the ancient structures of Petra. “I finally begin to understand what Frank Lloyd Wright spoke about regarding ‘organic architecture’—the idea that it’s of the land, and becomes one with the land,” he says. “So we’re always trying to use materials that are indigenous to the place, or construction typologies that have been there for hundreds of years.”

Oppenheim’s many other high-profile projects include a 30,000-square-foot house in the Los Angeles hills for film director Michael Bay, of Armageddon and Transformers fame—a structure that’s more on the scale of a resort than a private home. (And indeed, the design was based on work that the architect had done for a collection of villas in the Caribbean.) As Architectural Digest described it: “For all its palatial grandeur and whiz-bang gadgetry, the house still has a comfortable, gracious ambience, a mood one might describe as virile Zen.” In New York, Oppenheim won a design competition for a boutique hotel in Brooklyn—as yet unbuilt—whose three slender, slab-shaped towers are meant to echo the pillars of the Williamsburg Bridge.

At home in Miami—where the New York Times once called him “a minimalist landing on the beaches of excess”—Oppenheim designed what has become one of the city’s signature buildings: Ten Museum Park, a fifty-story Biscayne Bay luxury residential tower completed in 2007. In 2012, he and musician Pharrell Williams unveiled an ambitious master plan for Ice Cream City, a mixed-use vision for revitalizing Miami’s depressed Overtown district that Oppenheim’s firm describes on its website as “a wild amalgamation of a million bold ideas.”

Whole Foods tapped Oppenheim to design a new 40,000-square-foot store in Miami Beach, currently in the works; as part of the creative process, he researched the ancient markets of Greece and Rome. His numerous residential projects in the city include luxury loft-style buildings like the Ilona—named for his wife—which features outdoor “living rooms” and a rooftop pool. In real estate listings for that and other properties, Oppenheim’s name is a prominent selling point. “My work has a hypersensitivity toward context; how do you connect to a place and make the building part of that experience?” he muses. “Florida has always been selling this dream of paradise, if you will. Ponce de León searched for the fountain of youth and ended up here. That fascinates me—this idea of crafting paradise around the world, capturing the spirit of each place, and doing so in a way that evokes pleasure.”