The year 2012 begins with great optimism at Cornell, as we plan for our sesquicentennial, welcome Robert Harrison '76 as chair of the Board of Trustees, and gear up to choose a new cohort of alumni-elected trustees.

We are moving forward on our priorities, especially faculty renewal, student access, and public engagement, and we have announced an expanded university-wide philanthropic campaign, which—building on more than $3.4 billion already contributed by alumni, parents, and friends of Cornell—aims to raise a total of $4.75 billion by the close of 2015.

In these, as in so many other areas critical to the future of Cornell, the Board of Trustees plays a central role, and we are fortunate to have so many talented and committed individuals willing and able to serve as trustees. Cornell is unusual in that its sixty-four-member board includes individuals elected by the faculty, employees, students, and alumni, as well as those elected by the board itself or appointed by the Governor of New York State. (There is also one life trustee—a descendent of Ezra Cornell—and four ex-officio members with voting privileges, who serve because of the positions they hold.)

Bob Harrison brings to the post of board chair wide experience as a Cornell trustee. A student trustee in 1975-76, he is the first board chair to have previously held that post. In 2002, he rejoined the board, first as an alumni-elected trustee and then as a board-elected trustee, and he has served continuously ever since. 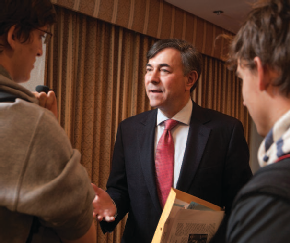 Bob chaired the task force that assessed whether Cornell should construct a new, state-of-the-art medical research building at Weill Cornell Medical College, supported the decision to proceed with that critical project, and has been a leader of efforts to bring our Ithaca and New York City campuses closer together. He also chaired the Committee on Student Life and other trustee committees, including most recently the Executive Committee, and he served as vice chair from 2006 to 2009, helping guide us through the economic crisis and putting us on a path toward becoming a stronger and more fiscally sustainable university.

Bob also brings to the position of board chair the perspective and expertise of a Rhodes Scholar, lawyer, former investment banking partner at Goldman Sachs, and current CEO of the Clinton Global Initiative. Smart, sophisticated, and sensible, with a wonderful sense of humor, he is an enormously capable leader whose expertise and mentorship have been invaluable to me personally and to Cornell. I look forward to working with and learning from him as board chair.

I also hope that you will consider seriously the alumni nominees selected to run for election to four-year terms beginning in July 2012:

I urge you to consider the strengths that each of these individuals would bring to the Board of Trustees and then cast your ballot. Look for more information coming to you by e-mail and U.S. mail later this month.

I know Bob Harrison joins me in asking you to stay in touch by sharing your ideas and comments. We invite you to keep abreast of the University's progress on its priorities of faculty renewal, student access, and public engagement as we approach the sesquicentennial and to cast your vote for the alumni-elected members of our Board of Trustees.