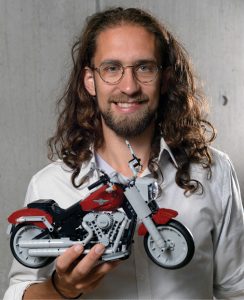 Psiaki with his Lego version of a classic Harley-Davidson motorcycle.Provided

Mechanical engineering alum Mike Psiaki ’09 has created a dizzying variety of vehicles including a train engine, a prop plane, a four-by-four, a motorcycle, an RV, a helicopter, a fighter jet, a blimp, an excavator, classic sports cars—even a Saturn V rocket. He’s made structures, too, like a Fifties-era diner, a carousel, and a soccer stadium. And he’s done it all while working in a kid’s dream job so iconic, it ranks up there with “taste-tester in a chocolate factory”: professional Lego designer.

Based at the famed toy company’s headquarters in Billund, Denmark, Psiaki is a lifelong Lego fan who has parlayed his passion for the ubiquitous bricks into a career. And while Lego has been a childhood staple for generations, it’s experiencing a boom in popularity. Over the past decade or so, more and more adults have been drawn to the firm’s complex building sets—costing hundreds of dollars, comprising thousands of pieces, and often tied to pop culture franchises like Star Wars. And with the COVID-19 pandemic curtailing many forms of entertainment, Lego sets—along with baking supplies and jigsaw puzzles—have been in high demand since last spring, with the more intricate designs often sold out or back-ordered online.“There seems to be a huge interest in Lego right now,” says Psiaki. “It’s a good way to spend time at home, alone or with your family.” 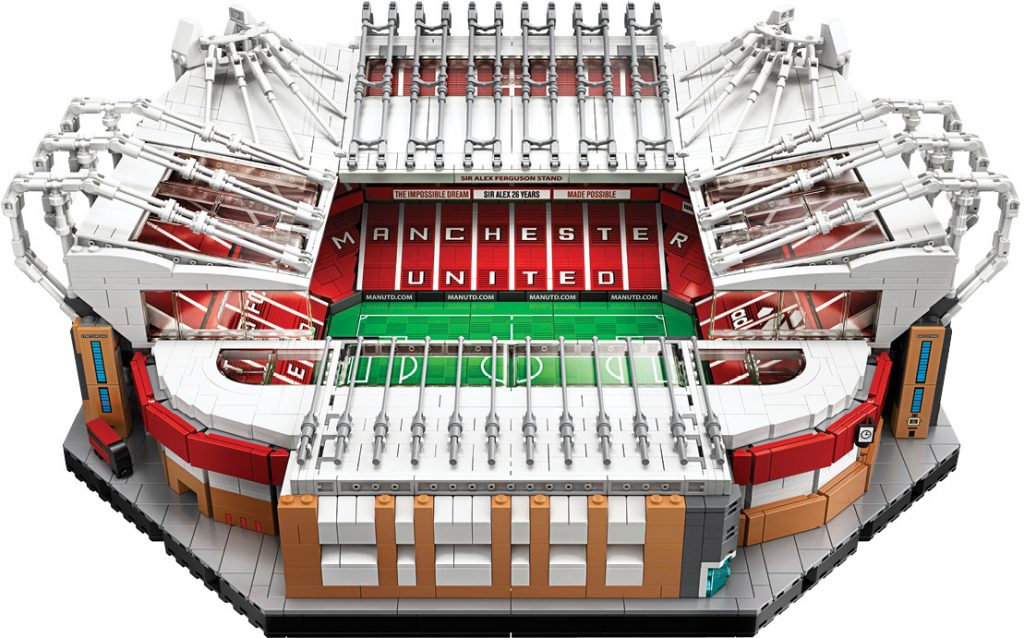 Psiaki grew up in Ithaca as one of nine siblings, six of whom are Cornellians; their dad, Mark Psiaki, taught mechanical and aerospace engineering on the Hill for three decades starting in the mid-Eighties. (He now holds emeritus status at Cornell and is on the faculty at Virginia Tech.) “I don’t remember a time when I didn’t love Lego,” Psiaki says. “I have two older brothers and they had Lego as kids, so there was always Lego around the house. I was envious of the cool things they could build, so I was constantly playing catch-up.” When a new Lego catalog would arrive in the mail—touting pricey sets the kids couldn’t easily afford—he and his siblings would try to build them with the pieces they had on hand. “It’s a reverse engineering process, but it’s also a creative challenge because you don’t necessarily have the right parts,” Psiaki observes. “First you have to figure out what the parts are and how they’re combined, then you have to figure out what you can use that will work as well. That caused me to develop as a designer unknowingly.”

A haunted house comprising more than 3,000 pieces, part of Lego’s Creator Expert line, is one of Psiaki’s newest designs. Provided

Psiaki’s Lego obsession continued through middle and high school—though as he got older, he recalls, “I started to have the perception that my hobby wasn’t socially acceptable, so it wasn’t something I talked a lot about, but I was doing it all the time.” Except for his busy undergrad years he continued to build Lego, more or less assuming that doing so as a grown-up was an oddball pursuit. “How could you find like-minded people?” he muses. “You can’t go to a bar and say, ‘Do you play with Lego in your spare time?’ ” That, like so many other things, changed with the advent of the Internet. Psiaki and his fellow Lego lovers learned that not only were they not alone in their passion, but there were enough of them to coin a phrase: AFOLs, or “adult fans of Lego.” “They all thought they were the only person who’s ever done this,” he says. “I thought the same thing. And then you get online and realize there are AFOLs all over the place.”

While working as an entry-level engineer for a defense contractor in New Hampshire—a job he calls “just so boring”—he joined a New England Lego club. “For the first time in my life, I was meeting up with other Lego fans,” he recalls. “We’d bring the models we’d built and talk about Lego and geek out for an evening a month, and it was amazing.” Eventually, with the encouragement of fellow club members, he applied for a job at the company; armed with a portfolio of the many designs he’d created over the years, he landed an interview at the Billund headquarters. Over an intense two days in April 2012, he was one of thirty applicants who were put through their paces with tasks like drawing themselves as a Lego mini-figure and creating designs from a pile of bricks under time constraints. “It was almost like some kind of reality show type thing,” he recalls with a laugh. 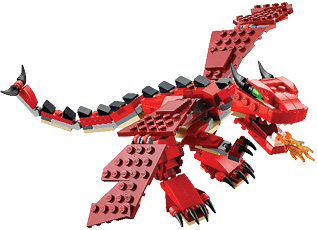 A dragon from the “Creator 3-in-1” line can also become a snake and a scorpion.Provided

Psiaki landed the job—though he has learned Danish, English is the lingua franca of the Lego design operation—and he’s been there ever since. He started out working for a line called Creator 3-in-1, aimed at elementary school-aged kids, whose sets comprise several hundred pieces that can be configured into three different designs; Psiaki’s creations include a red dragon that can also be made into a scorpion and a snake. He currently works for Creator Expert, a line marketed to adults that makes complex sets that often have thousands of pieces. His projects have included classic vehicles like a Ferrari F40, a Ford Mustang, a vintage Volkswagen Beetle, a Harley-Davidson “Fat Boy” motorcycle, and an Aston Martin from the James Bond films, as well as the 3,898-piece Old Trafford (the iconic stadium that’s home to the UK’s Manchester United soccer team) and a 3,231-piece haunted house that opens up to reveal features like a pipe organ and a working elevator.

Psiaki’s wife, Human Ecology alum Karen Ketsche Psiaki ’09, is a former dietician who also works at Lego, in the communications department. The couple has three young sons, and Psiaki notes with pride that the eldest, age five, has recently started showing a particular passion for Lego. “He has definitely taken to the bricks in a way that reminds me of myself when I was a kid,” Psiaki says. “The other day, he brought me two pieces, adamant that they could connect. I was looking at them thinking, There’s no way. But he was convinced they could; he just wasn’t strong enough. He showed me how he wanted me to put them together—and they connected.”

A carousel from the “Creator Expert” line has 2,670 pieces.Provided

2 thoughts on “A Ton of Bricks”