What can honeybees teach us about democracy?

What can honeybees teach us about democracy?

For forty years, Thomas Seeley has explored the mysteries of honeybees, studying their intricate waggle dances, mating rituals, and swarm clouds. But since the publication of his latest book, Honeybee Democracy, the Cornell biologist's observations on Apis mellifera have attracted questions on the behavior of Homo sapiens from management consultants, money managers, and business editors clamoring for advice.

What lessons, they ask, can businesses learn about group decision-making from the processes honeybees follow when they confront the life-or-death challenge of finding a new home for their hive? As Seeley's research shows, though individual bees have limited brain power, their collective reasoning allows the colony to choose the best nesting site about 90 percent of the time. "It is a democratic process that humans—especially office drones—might do well to emulate," Seeley wrote in an article entitled "The Five Habits of Highly Effective Hives" published in Harvard Business Review in November. 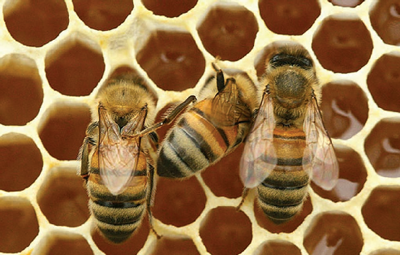 The honeybees' search for a new home begins in late spring or early summer when the hive becomes overpopulated and two-thirds of the workers and the old queen fly off in a swarm and cluster on a nearby tree branch. Several hundred scout bees then search up to five miles away for a space inside a living tree that is some forty liters in volume and ten meters off the ground. When scouts find promising locations, they return to advertise their finds by performing waggle dances indicating the site's desirability and location. A bee that has spotted an optimal cavity, for example, will do a dance with 300 circuits lasting up to ten minutes; a dance for a less suitable site will include up to thirty circuits and take only a minute.

After the first scouts have reported in, a second wave flies off to inspect the potential sites. If they agree with the initial assessments, they return and join in the dances. Eventually, after a day or two, interest builds up for the best location and the scouts from the winning site make a piping sound to signal a choice has been made. In about an hour, the swarm moves to its new home. "What the bees have evolved in terms of collective decision-making is solving a problem where each person has a piece of the information," says Seeley, a professor of neurobiology and behavior. "That's often the case in committee meetings, and it also occurs in business settings."

One aspect of the honeybees' collective reasoning that has generated interest in the business world is the absence of leadership. While the scouts are recruiting supporters for their chosen sites, the queen bee is safely ensconced in the center of the swarm and has no input into the selection process. "What these bees do is deeply counterintuitive," says Michael Mauboussin, chief investment strategist at Legg Mason Capital Management, who invited Seeley to speak to a group of clients at a conference last October. "They are solving difficult problems, and there is no leadership at all."

Most human groups operate with a leader, but Seeley cautions that he or she should serve as a moderator and not a proselytizer, to optimize the power of collective choice. In Honeybee Democracy, published in October, Seeley uses the decision by President George W. Bush to invade Iraq as an example of failed collective reasoning. As Seeley argues, after Bush told his foreign policy team that Saddam Hussein possessed weapons of mass destruction and should be removed, his advisers, intent on pleasing him, did little to question his thinking and "squandered their opportunity to use group intelligence."

Another key principle that businesses can borrow from bees is the need for group members to reach their evaluations independently. "Sometimes in companies you get this cascading effect where one opinion is voiced and then somebody else links their opinion to it, and you end up where you don't really want to be," says Michael O'Malley, a management consultant and author of The Wisdom of Bees: What the Hive Can Teach Business About Leadership Efficiency and Growth. "To avoid that, the bees make their own individual assessment. They go out and look at the site and decide if they want to vote for it. Independence of the decisions is critical to being right."

One reason the bees cooperate so effectively is that they share a common goal: the colony's survival. While members of human groups rarely have their interests so narrowly aligned, Seeley says this disadvantage can be overcome by insuring that committees or boards are composed of individuals who respect others, make constructive comments, and engage in vigorous debate.

Seeley's conviction that the principles demonstrated by the bees increases the reliability of decision-making by humans is not mere theory. As chair of the Department of Neurobiology and Behavior from 2005 to 2008, he introduced many of the bees' practices at monthly faculty meetings—including having frank and open debates and using secret ballots to reduce the influence of peer pressure. "It seemed to work well," Seeley says, "and we're still using those methods today."