Anyone who has traveled in developing countries has heard the admonition, “Don’t drink the water.” Environmental engineering major Julia Morris ’13 has visited Honduras—where just 30 to 40 percent of local residents have access to potable water—three times in the last four years. “Every time, I’ve gotten some sort of sickness from the water,” says the Florida native. “It’s not pleasant.” The queasiness fades within a week or so; what has lingered is an abiding commitment to do more than grab bottled water when she’s on the road. 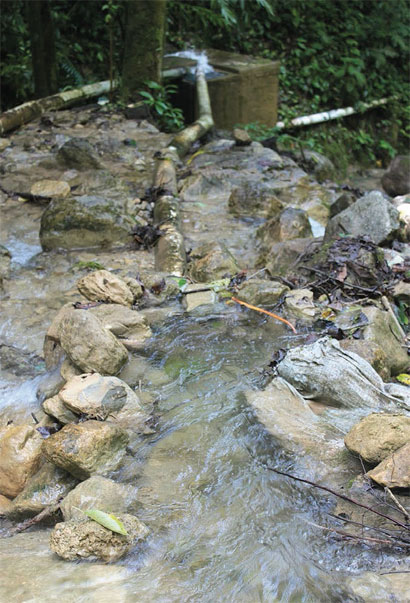 One billion people worldwide lack what most Americans take for granted: easy and affordable access to clean, safe drinking water. Many live in communities where electrical service is intermittent or nonexistent. Few have the financial and educational resources to build and maintain the kinds of sprawling, chemical- and energy-intensive municipal treatment plants common throughout the U.S.

Over the last seven years, more than 400 Cornell undergrads have labored in a labyrinth of laboratories behind bright blue double doors in the basement of Hollister Hall to design gravity-powered, non-electric water treatment facilities for low-resource communities. They call the effort AguaClara—”clear water”—and provide both the plans and ongoing technical support free of charge. Their first design was built in 2006 for a 2,000-person community in central Honduras; today, some 30,000 people in seven locales have water that is so clean, Morris is happy to quaff straight from the tap. The project’s efforts were recognized with a 2012 Katerva Award, which honors the world’s best sustainablity innovators. “In other classes we just do projects, but this is real,” says Morris, who first earned credit for her work as a sophomore and now serves as the team leader, coordinating fifty students dedicated to sub-projects including hydraulics, filtration, and collection of real-time data from the plants. “It’s a cool way to learn hands-on engineering. Our research is actually improving people’s lives.” 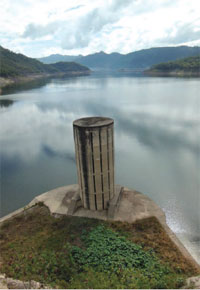 On a sunny afternoon in late October, sophomore Sarah Bolander clambers onto a lab counter to pour a solution of tap water and finely ground clay from a plastic beaker into a five-gallon bucket sprouting yards of surgical tubing. A simplified model of the portion of an AguaClara plant that removes sediment and other fine particles in the first treatment phase, the contraption sports myriad digital monitors, each transmitting data to a nearby computer. This morning, Bolander and teammates Mary John ’15 and Marianne Collard ’15 discovered a pool of clay and water spreading across their corner of the lab’s concrete floor, evidence of unintended consequences associated with their latest tweak to the system, meant to refine its performance. “Now we’re trying to debug the error,” says John, who started working on the team over the summer.

AguaClara founder Monroe Weber-Shirk, PhD ’92, a senior lecturer in engineering and the course leader, happens by. “Get it running so we can see what’s happening,” he counsels. “I’d like to see a graph: what was the water turbidity doing as a function of time?” Behind him, juniors Owen Guldner, a mechanical engineering major, and Diana Kelterborn, an environmental engineering major, struggle to remove the fittings embedded in a clear plastic pipe, a component of the sand filtration system in the demonstration plant. Used to train Honduran plant operators and drum up financial support at outreach events, the conceptual model broke on the way to a conference for South Asian government officials that Weber-Shirk attended in Nepal at the invitation of the World Bank. “Would pliers work? A screwdriver?” muses Guldner. “I think you can just use a fingernail,” says Weber-Shirk, who needs the demo in working order for a Cornell trustees’ dinner in less than twenty-four hours.

During fall semester alone, AguaClara fielded inquiries from communities in Kenya, Ethiopia, and India. Weber-Shirk and a handful of AguaClara alumni—including several who worked in Honduras after graduation—recently launched AguaClara Inc., a for-profit company intended to extend the project’s reach. Every January since 2006, Weber-Shirk has taken students on a two-week trip to visit plants and meet their operators. On the 2012 outing, Weber-Shirk and nineteen students visited the construction site of their eighth plant, which went online six months later. “I’m very hands-on and involved in Honduras,” he says. “But as we contemplate spreading out to more countries, there’s no way I can be hands-on with all of them.”

No two AguaClara facilities are the same; each reflects the size and geography of its community, as well as the project’s evolving design sophistication. In 2008, the students posted online an automated tool—since revised more than 5,000 times—that converts flow rate and other parameters into detailed plans for plant construction. Local water agencies use the plans to raise money for construction; so far, CARE International, Rotary clubs throughout the U.S., and even an Italian NGO have stepped up to fund the building of plants, using local materials and labor. Last summer, the team began collecting real-time monitoring data from plant operators using text messaging, with the results available online. “You have to make things simple, cheap, and easy to use,” says Morris. “That’s been our main philosophy.