In October, alumni, staff, and guests attended a dinner at the Statler recognizing seven distinguished alumni— the recipients of the 2014 Frank H.T. Rhodes Exemplary Alumni Service Awards. Named in honor of Cornell’s ninth president, the award recognizes a lifetime of volunteer service to the University. This year’s event was particularly special, as it was the twentieth anniversary of the awards, and more than thirty past recipients of the prize were in attendance. “Each of them has found a way to serve his or her alma mater in a particularly meaningful way and to have an enormous impact on this university,” vice president for student and academic services Susan Murphy ’73, PhD ’94, told the audience, which included President Emeritus Rhodes, his wife, Rosa, and incoming president Elizabeth Garrett. “I’m struck by the breadth and depth of their experiences and how they’ve given back.” In short, Murphy said, “the spirit of volunteer service is alive and well at Cornell.”

Indeed, this year’s recipients reflect the broad range of opportunities available to alumni volunteers. But each of their acceptance speeches had something in common: they all thanked Cornell for what the University has given them.

“One of the best aspects about our volunteer work,” John Alexander said, “is that Elaine and I were able to work together as a team.” He and his wife have served as national co-chairs of Cornell’s Tower Club and the President’s Circle committees. They are supporters of the Johnson Museum and helped revitalize the Cornell Club of Ithaca several years ago.

John is a Presidential Councilor and an emeritus member of the Board of Trustees. He has been an active member of the Class of 1974, serving as its treasurer and webmaster, and as a member of its 40th Reunion campaign. He has served on the administrative board of the University Council and is an emeritus member of the Johnson School advisory council and Major Gifts Committee. Elaine is a multi-term member of the University Council and has been active with her class, serving as its vice president and treasurer. She has served as chair of the Ithaca Area Regional Campaign Committee, as a member of the Cornell Plantations Twenty-First Century Development Committee, and as president of the Cornell Women’s Club of Ithaca. “We never expected to receive an award for doing something so natural to us,” she said.

Like many of the recipients, John Dyson lauded Cornell’s ninth president. “No award that Cornell could give me would mean more than one that has the name of Frank Rhodes,” he said.

A longtime champion of the College of Agriculture and Life Sciences, Dyson is a Presidential Councilor, a trustee emeritus, and a current member of the Fraternity and Sorority Advisory Council and the CALS Advisory Council. As a trustee, he has served on numerous committees: Buildings and Properties, Academic Affairs and Campus Life, Alumni Affairs and Development, Finance, and the Executive Committee. He has been Land Grant and Statutory College Affairs Committee chair and vice chair, and has worked as a liaison between the Board of Trustees and New York State.

The winners: More than thirty past Rhodes Award honorees were on hand for the twentieth anniversary celebration.

While he is being recognized for his volunteer efforts—which include being an advisor to several Cornell presidents, a Presidential Councilor, a life member of the University Council, and an emeritus member of the School of Hotel Administration Dean’s Advisory Board—it is for his philanthropy that Charles Feeney is most noted. Through his Atlantic Philanthropies, he has transformed student life and supported groundbreaking research.

Although he was unable to attend the ceremony, his daughter Juliette Feeney Timsit ’84 accepted the award on his behalf and relayed a message from him: “Cornell has a place in my heart—and I believe, just like Frank Rhodes, that universities create the future. Cornell certainly changed my life and I was never the same after that, bringing me opportunities I never imagined for a small-town kid from Elizabeth, New Jersey.” 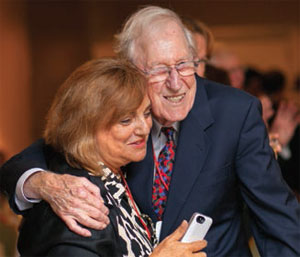 If you’ve been to a Big Red football game or to a Cornell reunion, you know Jim Hanchett. He has attended hundreds of gridiron matches over the years, and is known as the historian of Cornell Athletics. Jim is also the longtime chair of the Continuous Reunion Club—or, as he said in his acceptance speech, the “Chronic Reunion Club.”

In accepting his award, Hanchett recalled that Cornell has been a part of him since his youth, when he spent summers at a family friend’s farm in Ithaca during the Thirties. “Now, in retirement,” he said, “Cornell has helped me find ways to ward off idleness.”

“I set off for Ithaca both hopeful and fearful,” Kent Sheng recalled. While academics were strenuous, he discovered himself outside the classroom. Starting out running the projector at events for the Cornell Chinese Students Association, he eventually became president his senior year. He polished his skills as a writer for the Daily Sun. And as a fraternity brother at Sigma Pi, “I learned to show up, ease up, and speak up. Years later, I’ve to come realize that these non-classroom activities improved my personal confidence.”

His dedication to student life has guided his role as an alumni volunteer. He was a leader with the Student and Academic Advisory Council Interest Group, and as chair of the SAS Major Gifts Committee has been instrumental in promoting the West Campus housing system to alumni. In 1990, Sheng was one of the co-founders of the Cornell Asian Alumni Association (CAAA) and was co-chair of its first formal reunion in 2010. He also played a major role in the establishment of Cornell’s Asian & Asian Americ an C enter (A3C). “You don’t have to be an alumni volunteer for very long to know that Cornell is blessed with talented, energetic, and dedicated volunteers,” Sheng said. 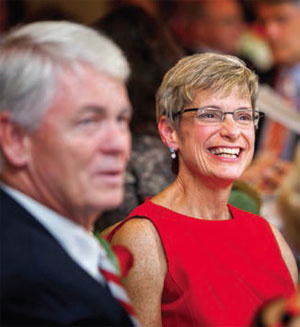 Ginger So came to Cornell sort of knowing the words to the Alma Mater, which closely resembles her sixth-grade anthem at P.S. 192 in Harlem. “Except,” she says, “our first line went ‘High above the Hudson’s waters.'”

At Cornell, she was a member of the Committee on Special Educational Projects (COSEP) , a program established in 1964 to increase enrollment of African American students and offer support services to foster their success. Like fellow award recipient Kent Sheng, she was involved in the Cornell Chinese Students Association. “I learned from my parents the importance of community and being connected,” she said. “My parents devoted their limited resources to making sure their children were educated.”

Like many alumni volunteers, So started out by working with the Cornell Alumni Admissions Ambassador Network. “I became more involved because someone asked me,” she recalled. “Friendships and opportunities for networking grew.” So has held many leadership positions: the first minority chair of the University Council; vice president of the Cornell Mosaic Executive Committee; and chair of the CAAAN Advisory Committee. She is a longtime leader of the Cornell Asian Alumni Association and has many roles with the Cornell Alumni Association, including director and vice president. “My experience at Cornell has been to grow and build community, so six degrees of separation becomes a separation of one,” she said. “Through building community we make dreams come true, and I am humbled by this honor.”

Be ‘All In’ for the Alumni Trustee Elections

Did you know that just over 10 percent of Cornellians voted in the annual Alumni Trustee election last year? Or that fewer than 2.5 percentage points separated the first- and lastplace candidates? Cornell is one of the few major universities that offers their alumni this opportunity, so we want to make sure you’re “all in.”

The 2015 election runs from January 16 through March 4. The four candidates, to be announced in January, are chosen by the Committee on Alumni Trustee Nominations, which is made up of volunteer leaders representing a cross-section of Cornell schools and organizations. To help voters get to know the candidates, Alumni Affairs is planning a moderated, videotaped discussion that will be available for online viewing after the Cornell Alumni Leadership Conference.

Make sure you receive your ballot: nearly 3,000 were returned last year with bad addresses. To update your contact information, go to www.cornellconnect.cornell.edu.

Details about the election can be found online at http://alumni.cornell.edu/trustees/