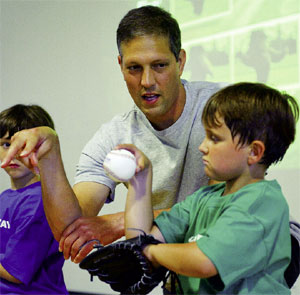 Not Just Playing Around

On any given day, one of Keith Camhi’s gyms can be a baseball stadium, a golf course, a playground, a basketball court – or all of the above and more. Camhi runs Great Play, a nationwide chain of a dozen gyms (with ten more in the works) geared toward kids from toddlerhood to ten. Using virtual reality technology in a 2,000-square-foot space called an interactive arena, the gyms’ audiovisuals and equipment can change to accommodate various activities and ages. “In the morning we can have two-year-olds in a parent-child class with Buddy, the animated mascot, leading cartoon games that teach how to run, jump, hop, and skip,” Camhi says. “And then in the afternoon it’s a basketball stadium with cheering and intros that mimic the NBA playoffs.”

A former high school athlete, Camhi majored in computer science at Cornell, where he played intramural sports. While his gyms are designed to appeal to kids of all skill levels, he says, they’re especially helpful to those who aren’t natural athletes. “The idea is that practice is seen as boring, but games are fun – so we turn key motor skill development into games,” says Camhi, who founded Great Play with his wife, Jyl. “We’re helping kids get off to a great start in life. If they’re competent and confident in their athletic skills, they can opt in and play. That has huge benefits, setting them on the right path both for physical health and for participating in sports down the road.”

The company holds patents on the interactive technology, which employs overhead cameras to triangulate the location of a ball – so, for instance, kids can smash towers of bottles as in a carnival game, or kick a field goal and have a virtual ref decide if it scored. But Camhi stresses that the facility is more than a giant Wii. “It’s not just a video game,” he says. “The technology plays a supporting role to an instructor-led curriculum.” The father of two children now in their teens, Camhi created his first interactive arena at home. During the testing phase, he notes with a laugh, there was no shortage of willing guinea pigs. “When we built the simulation in our basement,” he says, “all the kids in the neighborhood wanted to play at our place.” 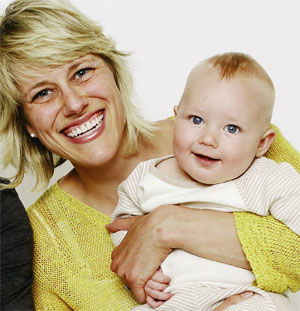 Childcare experts talk about the “first 1,000 days” – beginning at conception and running through a baby’s second birthday – as a vital time for development. That important period is the focus of Happy Family, an organic baby food company co-founded by Jessica Rolph. Combining GMO-free fruits, vegetables, and grains, the firm’s products are designed to offer “whole foods” in convenient, kid-friendly packaging. “The foods are packed with nutritious, organic ingredients,” says Rolph, the company’s Boise, Idaho-based COO. “For example, we have a mix of spinach, mango, pear; you can taste a little bit of the spinach, but for the most part it tastes like a yummy, sweet puree.”

Happy Family donates a portion of its profits to Project Peanut Butter, a nonprofit that battles malnutrition in developing countries through the distribution of a vitaminenriched peanut-based supplement that requires no added water. The firm’s products – which are sold at major retailers like Target, Amazon, and Costco – include lines aimed to appeal not only to babies but to toddlers, older kids, and even grownups. They include such ingredients as chia seeds, quinoa, and Greek yogurt, as well as probiotics for digestive health and the essential nutrient choline for brain development. “I eat the products all the time,” says Rolph, “even the baby food.”

Rolph stresses the importance of exposing kids to a wide variety of foods early in life, so they grow up with an adventurous palate. “Infants are really receptive to new flavors and tastes,” she says, “but when they transition to toddlerhood their range of acceptable tastes narrows.” A former anthropology major, she has a background in nonprofits and political consulting and also had a stint working at Whole Foods. But she says that some of her best insights have come from being the mother of two boys under four. Says Rolph: “Getting my toddlers to eat healthy foods has taught me a lot.”