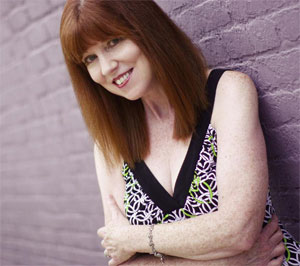 In the fall of 1972, a timid Cornell junior ventured into Goldwin Smith’s Temple of Zeus café and, for the first time ever, read one of her poems in front of an audience. Julie Kane had long been reluctant to venture into the café, known as the campus hangout for student writers and poets. “I felt that my poetry exposed my deepest soul,” she recalls, “and I was scared to death for anyone to read it.” But that first poem garnered a standing ovation. “After that,” she says, “I was hooked.”

Flash forward nearly four decades—and the former English major is Louisiana’s poet laureate. Serving a two-year term that ends in spring 2013, Kane gives an annual public reading in New Orleans and offers talks and workshops across the state. “Unofficially, the way I think of my job is to help bring poetry to a broader audience,” she says, “and to reach out to people who might not normally attend a poetry reading.”

A professor of English and creative writing at Northwestern State University of Louisiana, Kane hopes to offer her students the same encouragement that her Cornell professors once gave her. “Read all the poetry you can, both past and present,” she advises. “Find other writers that you can share your work with, be part of a writing community—and go to every visiting poet’s reading.” 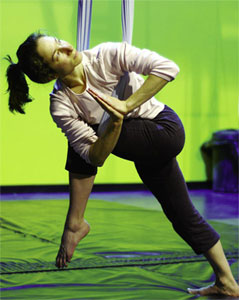 Michelle Dortignac has always had a love for movement. As a child, she did gymnastics, was a cheerleader, and performed as a dancer. Years later, she has taken that love to new heights—literally—by creating a variation on yoga in which participants are suspended from a fabric sling that hangs several feet from the ground. She dubbed it Unnata Aerial Yoga, noting that the Sanskrit word “unnata” has a double meaning. “It could mean you’re literally above something else,” says Dortignac, “or that you’re spiritually elevated.”

Inspired by an aerial acrobatics class Dortignac once took, Unnata Aerial Yoga is designed to allow people to perform poses that might be too difficult or straining if done on the floor. “It’s not as scary as some people would think,” says the former French major. “The practice itself wasn’t developed to be really challenging, but to be a tool for the student.” For example, a pose called the Full Wheel (a backbend where the feet and hands are firmly on the ground with hips lifted) is an almost inaccessible position for a beginner in yoga. “When you have the support from the hammock, it can help you to attain these challenging positions,” Dortignac says. “Using your core strength, you find just where to bend from and let gravity allow your body to fold into the positions.”

Dortignac splits her time between teaching at a studio in Manhattan’s West Village and training other yoga enthusiasts to become instructors in her discipline. Unnata Aerial Yoga is now offered around the globe, including in Brazil, Italy, Germany, and Russia. “People should never be satisfied with just a plain old fitness class,” Dortignac says. “Go for something that will change your whole life, not just the shape of your body.”