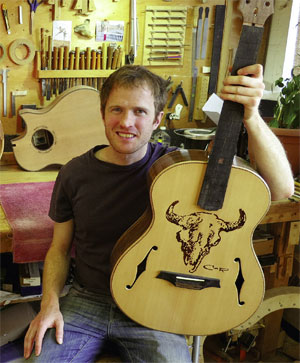 After hundreds of hours spent working on one of his handcrafted guitars, Mike Kennedy knows it’s complete when it passes his benchmark test: he tries it out by playing “Ojo,” a Sixties folk song.

The former mechanical engineering major has been building custom instruments since 2006, when he founded his one-man company, Indian Hill Guitars. “It’s just me, start to finish,” says Kennedy. “I do everything from scratch. There are no parts; it’s all just from hunks of wood.”

Based in Québec, Kennedy makes flat top, steel string, acoustic instruments best suited for folk and bluegrass finger-style playing. Clients can choose from four models (ranging from a four-string Tenor to a full-bodied Grand Concert) and follow their instrument’s progress, from rough lumber to finished product, on Kennedy’s website. Prices start at $5,000. “In the custom guitar world, there are a lot of unique things that you wouldn’t find in a typical factory instrument—small technical things in how the guitar is put together,” says Kennedy. His guitars can be tailored to a client’s style and sound preferences with options like an elevated fingerboard, an adjustable neck, and alternative locations for the sound holes, which he says help the instrument project music more efficiently. The body is customizable through a choice of domestic and exotic woods such as Sitka Spruce and Indian Rosewood, plus details like colors and borders.

Even Kennedy’s most basic model requires up to two months to complete, meaning that he produces only about six guitars a year. He says that the labor-intensive nature of his craft is the most gratifying part—and the most difficult. “It’s a big challenge,” says Kennedy, “finding that balance between striving for perfection and being willing to let go.” 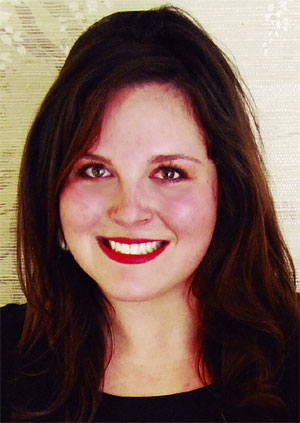 Passing through New York’s historic Hudson Valley as a child, Amy Lewis would often see antique farm equipment rusting in the woods. Two decades later, those memories inspired the former architecture major to seek out the abandoned machines and use them to create art, furniture, and other objects.

Lewis transforms decaying farm implements into fountains, mirrors, candlesticks, chairs, and tables in a medium she calls Agrisculpture. “It’s farm equipment lovingly rethought,” she says. “I look at Agrisculpture as a way to give something a second life. I feel like I’m saving these old machines.” Lewis works exclusively with equipment that can no longer serve its original purpose and whose only value is as scrap. One of her favorite raw materials is the disc harrow, which consists of steel plates that are hooked up behind a tractor to cultivate the land. Lewis uses the plates for mirrors and fountains and the metal between them for candlesticks. Says Lewis: “I can take something that is completely useless and turn it into something that has a new and different function.”

Agrisculpture owes its start to the economic crisis of 2008. After graduation, Lewis worked in architecture and zoning in Dubai and Los Angeles. But with many firms closing or cutting back, she returned to her native Upstate New York and focused on her art. Her first creation was a trio of metal fountains commissioned by Cornell Cooperative Extension of Sullivan County, where it’s now on display. These days, Lewis juggles about five projects at a time. Her creations can be found in restaurants, farms, private collections, and public spaces throughout Upstate New York. “I get so excited about the surprise on the client’s face when they see the finished Agrisculpture,” she says. “It’s not a pile of rust anymore—it’s actually something beautiful.”